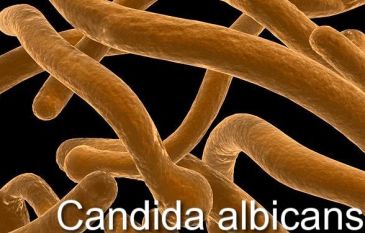 The human body is a host for billions of microbes, including the very common fungus, Candida albicans. Harmless most of the time, these yeast cells may suddenly transform into many cells, chained together as long and branching filaments that invade body tissues. This has been reported in many vulnerable individuals, including pre-term babies. A recent study by Gonia et al. [1] found that, in the laboratory, human milk oligosaccharides protect cells, similar to intestinal cells from pre-term babies, against infection with Candida albicans.

Human milk contains about 7% carbohydrates, mostly in the form of the simple milk sugar, lactose. Other components of milk carbohydrates are the more complex sugars, the oligosaccharides. Oligosaccharides constitute about 1% of human milk, and more than 2% of colostrum [2,3]. Even though these sound like small amounts, the total quantity of sugars in human milk is actually similar to the quantity of proteins, both being abundant components.

One of the most important roles for breast milk is to support the immune system of a newborn, and provide bioactive molecules that allow the gastrointestinal tract of the baby to mature. A normal part of this maturation is the development of a healthy balance of microflora. Candida albicans, a fungus found in the human gastrointestinal tract, is one of the mix of microbes that are considered to be commensal. Normally held in balance, like the many other commensal microorganisms found in the gastrointestinal tract, if allowed to grow unchecked it becomes life-threatening. One such critical circumstance is in the immature gut of pre-term babies.

Pre-term babies have both an immature immune system and an underdeveloped gastrointestinal tract, which makes them highly susceptible to infection. Their journey to become happy healthy infants depends on nutritional support and preventing the growth of microbes that may lead to sepsis.

Candida albicans is a common problem for pre-term babies. It has the capacity to over grow in the gut and invade the bloodstream through the intestinal wall. Gonia et al. [1], from the University of Minnesota, along with colleagues from UC San Diego, designed experiments to test the capacity of human milk oligosaccharides to protect the immature intestinal wall against invasion by this pathogen. To do this, they added purified milk oligosaccharides to cell cultures in the lab. They used a cell line derived from the intestinal lining corresponding to the gut of a pre-term baby. In this way they could control the conditions under which the cells were exposed to the fungi, and infer how the cells of the intestine would behave when Candida albicans was present.

The scientists first developed a combined purified stock of oligosaccharides from pooled breast milk samples. This provided an opportunity to examine the effect of different doses of the treatment. Cells were grown with escalating doses of oligosaccharides pre-mixed with the Candida albicans. The cells were allowed to incubate for set periods of time, and then the scientists examined the cultures for evidence of invasiveness. Invasion is the term given to a specific stage of fungal infection when it actually penetrates the cell. The scientists also looked for binding of yeast cells to the intestinal cells, and measured the size and presence of hyphae—the branching projections that fungi use to enter the intestinal wall, and ultimately into the bloodstream.

When they examined the cells, they found that the addition of the oligosaccharides markedly reduced the association of yeast and intestinal cells by 40%. They also noticed that the lengths of the hyphae were reduced by 30%. This also corresponded to the inhibition of yeast gene activity. However, for the human milk oligosaccharides to have an effect, they had to be present at the time the yeast cells came into contact with the intestinal cells. In other words, the effect was due to the direct interaction of the oligosaccharides and yeast, and did not prevent the yeast cells from growing. The scientists also noted that the treatment delayed the formation of hyphae, rather than completely preventing it.

Although there is further work to be done to understand how to get the most from milk oligosaccharides, these results are very encouraging for clinical application. Additional studies will determine if purified preparations have practical benefits, but until then we can be reassured that the concentrations of oligosaccharides in colostrum and human milk are going to help pre-term babies to survive during those crucial early weeks of life.