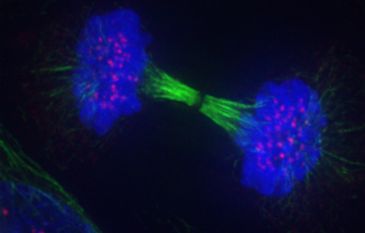 Occasionally in science a finding comes along that makes you wonder how no one figured it out before. That is the case with a discovery published in late April [1] by Australian researchers, who showed that milk-secreting cells in several distantly related—and presumably, therefore, in all—mammals, have two nuclei. The researchers demonstrated that these cells develop double nuclei because of a carefully regulated, incomplete cell-division process, involving unusually high levels of a particular enzyme. Quickly after lactation finishes, these cells commit suicide, allowing the breast to return to its pre-pregnancy state.

Lead investigators Anne Rios and Nai Yang Fu, both of the University of Melbourne and the nearby Walter and Eliza Hall Institute of Medical Research, in Victoria, Australia, were aware of a dissertation from the early 1980s claiming to have observed breast cells containing multiple nuclei [2]. The technology available back then left open the possibility that this observation was the outcome of how the tissues were prepared for microscopy. Rios, Yang, and their team brought a technology called three-dimensional confocal microscopy to the task, which allows researchers to measure the volume of different parts of cells.

Their investigation proceeded in a series of steps. First, working with different types of cells from the breast tissue of mice, the team demonstrated that only cells of one type—luminal cells—ever contain two nuclei, and that this feature appears in them on the same day that the cells start secreting milk. (Staining the cells revealed that these were the very same cells that produced lots of milk protein.)

Second, the researchers measured different features that made up the luminal cells’ volume. This showed that the two nuclei in each of the cells were of the same size, and that the overall cell volume was much larger than that of single-nucleus luminal cells, presumably to accommodate the cellular machinery required to synthesize milk.

Turning to the question of how the cells got this way, there were two competing hypotheses: either two single-nuclei cells fused together, or one single-nuclei cell made a second copy of its nucleus as it embarked on the process of dividing—only for that process to remain incomplete. By triggering luminal cells to generate proteins that showed a different color in different cells, the researchers eliminated the fusion hypothesis (since no multi-colored cells appeared as the double-nuclei cells formed). Meanwhile, they separately showed that the double-nuclei cells live for an unusually long time given how metabolically active they are, adding support to the incomplete-division explanation.

The investigators then delved even deeper into the mechanistic details. The process of creating two nuclei had to be triggered by one of the hormones that signal the body to commence lactation, prolactin being the foremost candidate.

To probe what was going on inside the cells, the researchers began by sequencing the RNA expressed in luminal cells in late pregnancy, and also during early lactation, to look for differences between the two cellular states. A key candidate emerged from this process: the cell cycle regulating enzyme, Aurora kinase A (AURKA), whose RNA code was found at much higher levels in the lactation-stage cells. Over-expression of AURKA had already been linked to the formation of double-nuclei cells, and to breast cancer (which is known to be generally very aggressive when it emerges during and just after pregnancy). In the Australian team’s experiments, AURKA appeared only at the beginning of lactation—it was undetectable by the fourth day—implying that it acts as a switch, turning on milk production.

To underscore the role of AURKA, the team tried removing it by deleting its gene. As expected, this action completely eliminated double-nuclei cells from breast tissue and resulted in milk glands that made no milk. They also showed that AURKA’s action depends on the presence of one its substrates, called PLK-1. Finally, the team demonstrated that AURKA’s over-expression indeed results from the appearance of prolactin—more precisely, from the appearance of prolactin alongside epidermal growth factor, a protein that stimulates cell growth.

The molecular details of the mechanism mapped out, the researchers then wondered about the evolutionary importance of their findings. They identified two-nuclei luminal cells in the breast tissue of lactating creatures from opposite branches of the mammalian evolutionary tree. Lactating humans, seals, and wallabies have about 30% of their breast tissue composed of cells with double nuclei; in cows the proportion is 40%. This implies that the evolution of two-nuclei luminal cells was crucial to the evolution of the most mammalian of features—lactation—about 300 million years ago [1,3].