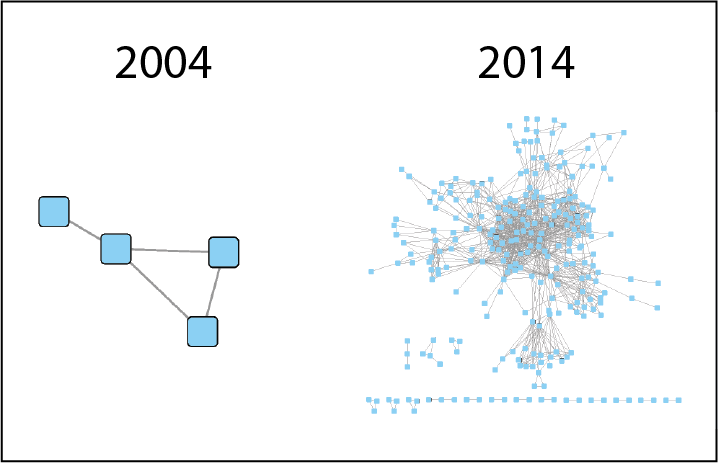 During the last two decades, there has been a revolution in the way science is undertaken. The minor discoveries in the past, such as the earth revolving around the sun, E=mc2, the discovery of penicillin, and the gene basis to hereditary, were originally made by inspired individuals largely acting in isolation. They saw what no one else could see. The iconic public image of these scientists highlights their unkempt appearance and seeming disconnect with the immediate world mirroring a solitary mind languishing in abstract places. All that has now changed. Collaboration on the scale of the consortium now rules the scientific roost, as it accelerates the discovery process. At its heart, collaboration is the brewing pot for new ideas. Why is this important? New ideas lead to innovation, which is the fuel for large increases in industry productivity, the birth of new industries, and major societal advances. But how do you measure the success of collaboration?

Kwok and five colleagues from the University of California in Davis and the California Dairy Research Foundation recently published an intriguing analysis of collaborations, research output, and research impact associated with an annual scientific meeting focused on milk and held over a 12-year period (1). The meeting was promoted by the International Milk Genomics Consortium (IMGC) to better understand milk composition and the process of lactation in dairy cows, humans, and a wide diversity of other mammalian species. There are some big lessons revealed by the investigators’ analysis.

Rise of the Consortia

Thomas Young, about 250 years ago, was said to be the last scientist who knew everything, from how the eye works to the wave-like properties of light that now underpin modern day quantum mechanics, the spooky physics of the very, very small (2). He was also crucial for the deciphering of the Rosetta Stone—undoubtedly a man with incredible talents. His research on light gave the first inkling that nature is exceedingly complex and it contrasted sharply with the dominant scientific theme of his day, the well-ordered planetary motions predicted by mathematics. The massive expansion of scientific knowledge since that time, especially in biology, means that any one person no longer has the breadth of knowledge and expertise, or the finances to master the scientific challenges of understanding and exploiting the complexities of nature.

In response, a strange thing recently happened—scientists started to coalesce (3, 4). They said it couldn’t happen, it was against the laws of nature. At first, scientists were found in their natural habitat in small gatherings surrounding free food after a campus function, and then in small crowds occasionally tolerating a wayward soul from a long-lost scientific discipline, like statistics, or someone from industry who frequently asked the disquieting question “what does that mean?” Finally, they gathered in greater numbers with considerable international scientific and industry diversity, a herd moving in unison with a single obsessive purpose in mind. The consortium had arrived!

Leading the charge of the modern-day consortia are the geneticists and particle physicists (1, 3); one is focussed on perhaps the greatest mystery of life, inheritance of form and function in large populations and their evolution through the eons, and the other on the strangeness and unpredictability of very small subatomic particles.

The word “consortium” seems modern, but it is derived from the Latin con meaning together and sors meaning fate i.e., a partnership of common fate. The Romans probably used consors to describe trade alliances and perhaps the occasional marriage. Kwok and colleagues (1) explain that the emergence of scientific consortia in the life sciences in modern times first began as a trickle in the 1970s, and became a flood of over 5,000 in 2016. The investigators noted that it is no coincidence that the number of life science consortia took off in the 2000s, a decade marked at its outset by the completion of the Human Genome Project and the realization of its enormous impacts (5, 6). Soon after, a cow genome sequence became available, which was exploited by an international consortium of scientists to better understand milk composition and lactation (7-9).

What are the drivers of scientific collaborations, especially within a consortium? Overwhelmingly for the individual, it is the excitement and sense of achievement in tackling a large and complex problem using innovative ideas. Kwok and colleagues also listed access to multidisciplinary expertise, improved access to resources and funding, increased scientific productivity, and accelerated careers (1). Perhaps the most important aspect of collaboration is that the achievements of the whole greatly exceed the sum of the individual contributions. Most consortia are set up with large-scale research funding for a fixed timeframe to address a highly specific goal, like the sequencing of the human genome. But there is another model for a consortium.

The Birth of the International Milk Genomics Consortium

Within the life sciences, agricultural researchers have been slow to form consortia. Kwok and colleagues write that agricultural scientists in 2016 were involved in about 10-fold fewer consortia than researchers involved in human-related investigations (1). They also suggested that the number of agricultural consortia at this time was actually a substantial overestimate due to several measurement issues. The reasons for this slow response of the agricultural research community are unclear, especially as food production underpins human health. Perhaps the species-centric employment of agricultural scientists, driven by industry interests, also limits their wider collaboration.

Kwok and colleagues (1) noted that with a similar backdrop in 2004 of poor large-scale scientific collaboration, members of the dairy industry and dairy organizations around the world sponsored the formation of the International Milk Genomics Consortium (IMGC) managed by the California Dairy Research Foundation. Unlike most consortia, the IMGC did not focus on a single narrow research or industry issue in a fixed time-frame. Rather, it set up an ongoing “collaborative, interactive and pre-competitive platform for the (dairy) scientific community and industry to accelerate the understanding of the biological processes…and facilitate transition of that knowledge into usable commercial benefits for (the dairy) industry.” The IMGC promoted these aims in an annual conference of scientists and industry representatives interested in lactation, milk composition, milk processing, and human health.

Kwok and colleagues highlighted important differences between the IMGC and most consortia (1). In particular, the IMGC did not fund research. The investigators suggested that this aspect was particularly important in their analysis of collaborations and scientific productivity within the IMGC, as the availability of research funding is known to skew such analyses (1). The investigators then put an analytical spotlight on the considerable success of the IMGC (1).

Kwok and colleagues assessed the impacts of the IMGC annual meeting on scientific collaboration, productivity, and quality. Their analytical approach used twelve years of data about authorship on milk-related research articles published in international peer-reviewed journals. Scientists universally point out that the publication of scientific articles is not for the faint-hearted. It is a tough and rigorous process where only the fittest articles survive. Publications are important as industry innovation often goes hand-in-hand with scientific innovation revealed in publications. The investigators then subjected the data to a searching statistical analysis (1).

The investigators first presented a startling visual representation of the increasingly complex collaborative networks formed between 2004 and 2016 for people who attended the annual IMGC meeting. A picture is worth a thousand words. The diagram showed that scientists initially worked in small disconnected groups that quickly merged into increasingly larger and more complex networks with time, which in turn eventually became a single large network. Kwok and colleagues reported an impressive increase of about 10-fold in the average number of co-publications per IMGC meeting attendee, a measure of scientific collaboration during the period from 2004 to 2016. They then compared the number of milk-related publications for all meeting attendees with randomly selected individuals who never attended an IMGC meeting, but who were involved in lactation research. The comparison demonstrated that scientists attending the IMGC meeting published about twice as many research papers compared with non-attendees. In a similar way, the investigators identified a massive increase in IMGC member co-authorships, a measure of collaboration, for attendees compared with non-attendees. Some publications are simply more important than others. While scientific impact can be difficult to assess, the citations of a publication by the author’s often hypercritical and highly competitive peers are recognized by scientists as a robust measure of research impact. Kwok and colleagues then compared citations for publications from IMGC meeting attendees with those from randomly selected non-attendees specializing in lactation research. The analysis demonstrated that citation rates were significantly higher for the attendees compared with non-attendees, implying higher scientific impact of publications from IMGC meeting attendees.

Kwok and colleagues concluded that there is a simple and important message from their analyses. The IMGC markedly increased scientific collaboration, productivity, and impact of researchers interested in the many intriguing properties of milk and the process of lactation. The investigators inferred that the success of the IMGC may be in spite of the lack of specific scientific focus, except for the lactation theme, and the lack of direct research funding. Simply stated, collaboration works.

2. Robinson A. The last man who knew everything. London: Oneworld Publications; 2006.