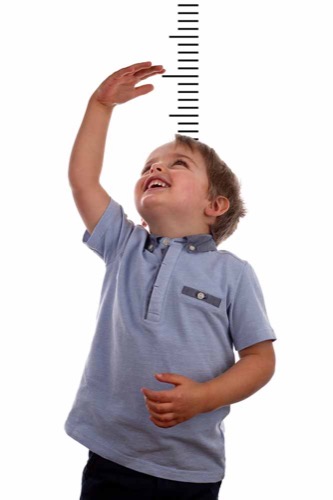 The Dutch and Montenegrins are the tallest men in Europe, measuring in at an average height of just over six feet (1.83 m). Separated by nearly 2000 miles, what might these two countries have in common that explains their above-average stature? The results of a new study [1] suggest their height may have as much to do with what is on their dinner plate as what is in their DNA. Using data from 42 European nations, as well as the U.S., New Zealand, and Australia, Grasgruber et al. [1] found that the strongest predictor of male adult height was the population’s protein index – the amount of protein consumed from animal sources, such as dairy and pork, compared to proteins consumed from vegetable sources, such as wheat. If height is a marker for the health of a population, could the answer to improving health outcomes be as simple as dining like the Dutch?

Height is a complex trait, resulting from the interaction of the genes you inherit from your parents and the environment in which you grow and develop. While genetic variation explains between 60-80% of the variation in human height [2], the influence of the environment should not be underscored. Despite what the genes may code for, a child’s growth may fail to reach its genetic potential in an environment with nutritional and immunological challenges. This was clearly demonstrated over 100 years ago by anthropologist Franz Boas who found that children born in the U.S. were taller than their foreign-born parents. Indeed, numerous studies have described this secular trend in height among immigrants from developing to developed countries [3].

Based on his findings, Boas argued that the study of human growth was analogous to the study of the human condition. This thinking still predominates today. The United Nations (through the World Health Organization) uses height as a measure of health in developing countries and at-risk populations in developed countries. Human biologists study variation in height across populations in order to identify environmental factors that allow certain populations to maximize their genetic potential.

The tall and the short of it

Grasgruber et al. [1] are just such human biologists. They are not the first to investigate sources of variation in human height in Europeans, but their study is the first to include countries in Eastern Europe, including the Balkan states and former Soviet republics. And the quantity of data compiled is nothing short of impressive. They tracked down height data collected in the last 10 years for 42 European countries, as well as the U.S., Australia, and New Zealand. Socioeconomic factors examined (by country) included: gross domestic product (GDP), health expenditure, children’s mortality, total fertility, urbanization, the Gini Index (a measure of wealth distribution or inequality), and nutrition (from data on food consumption provided by FAOSTAT via the United Nations). Lastly, they also pulled genetic data (specifically, Y haplogroups – shared gene clusters on the Y chromosome) from the literature for 43 of the 45 countries.

While the methods were quite complicated, their research questions were simple: what factors are causing the modern increase in stature among some European countries? Not surprisingly, height correlated positively with GDP and health expenditure, and negatively with children’s mortality. Because protein is well known to be the most important nutrient for skeletal growth, it also was not surprising that male stature positively correlated with animal protein consumption, particularly milk and cheese (both of which had higher correlation coefficients than pork and fish).

What the authors had not anticipated, however, was the strong, albeit negative influence of vegetable proteins. The Dutch are the tallest in Europe, as well as in the world. Their extra centimeters were best explained, not by genes on their Y chromosome, but by a nutritional factor called the protein index – the ratio of animal proteins to vegetable proteins. Furthermore, the results were identical when they simplified the protein index to include only milk proteins versus wheat proteins. The tallest populations were those that consumed more protein from milk, and less protein from wheat.

A country’s nutrition cannot be separated from the various socioeconomic factors that were examined in this study. Access to high quality proteins (based on amino acid structure and digestibility) is certainly influenced by wealth, but several wealthy countries, including the U.S., have much lower protein indexes than would be predicted by their GDP [1]. At an average height of 179 cm (around 5’ 9”), U.S. males (of European ancestry) are more than 2 cm shorter than Bosnians and Serbians, 3 cm shorter than Czechs, and nearly 6 cm shorter than men from the highlands of Herzegovina. A lower protein index, along with less health expenditure per capita than predicted by the GDP, best explained the shorter stature of white males in the U.S.[1].

Ham and Gouda, hold the bread?

The study’s authors took this result as good news, because it implies access to proteins in milk, and other animal sources may be influenced more by personal choices, than finances [1]. What’s more, nutritional recommendations, such as increasing milk protein consumption in growing children and adolescents, are likely much easier to implement than a major overhaul to a country’s health care system (just ask Obama). The importance of milk protein for growth and bone health has been demonstrated in numerous other studies. This study further highlights dairy as an essential component for optimal growth.

Finally, it is important to emphasize that the data collected only allows the authors to discuss what has been the most important influence on height in contemporary European populations. Social equality, access to healthcare, and generally higher standards of living have obviously been important and can explain height increases across Europe, the U.S., Australia, and New Zealand over the last 150 years [1] and may currently be as important as nutrition in explaining variations in height in other parts of the world.