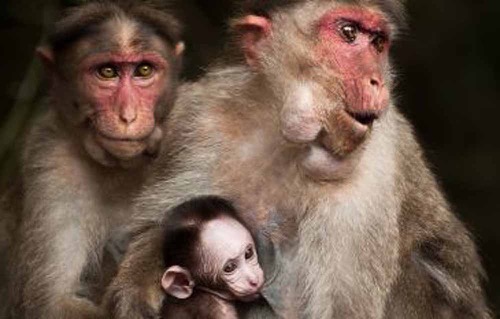 As any new parent can tell you, human newborns are very needy—and for good reason. Born at an earlier developmental stage than their primate relatives, human infants must accomplish a great deal of fetal development (some say the equivalent of nine more months!) outside of the womb. Responsibility for this “fourth trimester” falls squarely on the shoulders of human breast milk, and so it is no surprise that decades of research have searched for attributes in human milk that support the unique developmental needs of human infants. While much of the focus has gone to milk fats and carbohydrates, a new study has turned the attention to milk proteins (1). Utilizing new methods in protein identification, Beck et al. present the most comprehensive human milk proteome (the list of the types and quantities of all proteins in milk) to date, as well as the first milk proteome for a nonhuman primate, the rhesus macaque. Despite having less total protein than rhesus macaque milk, Beck et al. found that human milk has more than three times the types of proteins in rhesus milk and higher quantities of nearly every milk protein that the two species share. Their findings demonstrate that from digestion, to immunity, to neurodevelopment, human infants get more of a boost from milk proteins than their primate cousins.

Taking it to the next level

At first glance, there does not appear to be anything remarkable about the protein content of human breast milk. With just over 1% total protein, which contributes only 10% of the total calories in milk, it might even be assumed that protein is not very important for human infants. But human milk protein deserves a second look—a much (much) closer look. The human milk proteome details all of the types and quantities of proteins present in human milk, from enzymes that aid in fat digestion to immunoglobulins that provide specific immunity for naïve infant immune systems. Although total protein content of human milk may be low, the story from the level of individual proteins is much different.

Previous studies on the human milk proteome have demonstrated that within the 1% of total protein there are, in fact, hundreds of different proteins. However, because no two studies identified the same proteins, there has been no consensus of just how many different proteins are actually present.

The inconsistency among results comes from the methods used to isolate and quantify proteins. Milk proteins are identified using a mass spectrometer, but this analysis requires using only the protein fraction of the milk. Previous methods all prepared their samples by taking whole milk and stripping all other components out until all that is left is protein. In addition to being complicated, this method has the potential for throwing the baby out with the bathwater by removing a lot of important proteins, such as lipid-bound hormones.

Beck et al. (1) developed a less complicated route and simply removed the protein from the whole milk sample. “The advantage to this method,” said Kristen Beck, lead author of the study and PhD candidate at the UC Davis Genome Center, “is that we were able to analyze whole milk samples, exactly what a human infant would be receiving.”

They also improve on previous methods by “cleaning up” the proteins before they are run on the mass spectrometer. Glycans are carbohydrates that sit on the surface of milk protein chains. These glycans are important for protecting proteins during digestion, but can also keep proteins hidden during analysis. Removing the glycans (in a process known as glycan cleavage) exposed more of the protein chain, which in turn increased the rate of protein detection, particularly of smaller proteins.

Their improved methods produced the most complete picture, thus far, of the human milk proteome, identifying 1606 different types of proteins, 524 of which were newly identified in human milk. These results surprised even the researchers themselves. “When we started out, we thought we might improve our list of human milk proteins by 10%, but 30% of our whole proteome were proteins that were unknown in milk,” said Beck.

The most obvious difference between the two proteomes is in the total number of proteins. Despite having half as much total protein (human milk 1.2%, rhesus milk, 2.1%), human milk has over three times the number of different proteins than macaque milk (1606 vs. 518). But perhaps the most interesting finding came from comparing the quantities of proteins between the two species. Among the shared proteins (called orthologs), 82 were found in higher quantities in human milk compared to six enriched proteins in macaque milk.

One protein found in higher concentrations in human milk compared to macaque milk is bile salt stimulated lipase (BSSL), an enzyme that helps human infants (who have low bile production) digest fat. Another is lactoferrin, a protein that binds iron in milk, presumably to help infants fight infection by keeping iron away from pathogens that use it for food. To determine what other enriched proteins might do for human infants, Beck et al. looked at which tissues in the body manufactured each protein—different tissues manufacture proteins at different rates and make proteins that are unique to that tissue. Of the ten different tissues that passed the statistical test for significant enrichment of these proteins, five are part of the brain, suggesting a greater need for proteins that play a role in neurodevelopment.

“The higher levels of these proteins in human milk are consistent with the well-established perspective that human babies, compared to other primate infants, are born at a slightly earlier stage of development and require higher levels of specific proteins that will nurture them as they mature,” said principal investigator Danielle Lemay, a nutritional biologist at the UC Davis Genome Center. “These are specific proteins that are enriched in human milk,” added Beck. “It is truly [evolutionary] fine-tuning for the infant.”

It is intriguing to hypothesize that the enrichment of these specific proteins is unique to human milk compared to milks from primates and other mammals. The results from the macaque milk proteome certainly support this evolutionary hypothesis, but a better test of it will come from side by side comparisons with ape milk proteomes—particularly chimpanzees or bonobos who share the most recent common ancestor with humans.

But regardless of whether ape milks show similar protein enrichment, the 82 differently abundant proteins identified by Beck et al. (1) are clearly important for human infants and offer important insights about their nutritional, immunological, and neurodevelopmental needs. As Lemay explains, “Human milk provides a recipe for human nutrition during the neonatal period.” The more research we do on human milk macronutrients, micronutrients, and bioactive components, the more detailed this recipe becomes. Beck et al. (1) have added 82 potential ingredients to this list. These proteins, particularly those involved in neurodevelopment, represent excellent candidates for future research on improving infant formula composition. As Beck puts it, “If we can use this research to enhance infant formula, we can give those babies the helping hand that evolution has been working on for tens of millions of years.”