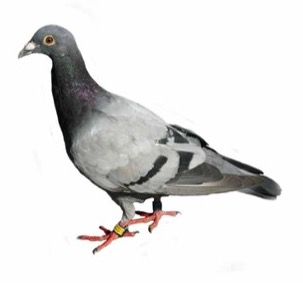 Last month was Movember, during which men grow facial hair to raise awareness of men’s health. I started thinking about milk moustaches and realized you can’t have a milk moustache if you don’t have lips. I guess we won’t be seeing pigeons in any upcoming dairy ad campaigns- even though they make “milk,” and it functions like the milk of mammals.

“Pigeon milk” was first systematically described in the 1930s and continues to intrigue dairy scientists through today. Pigeon chicks hatch in a relatively undeveloped state, but during the first days after hatching, they show accelerated development. During this time, female and male pigeons shed “milk” from the epithelial cells in their crop, an enlarged compartment in the gullet in which food is stored prior to digestion. This chunky substance is rich in fats and proteins and is regurgitated to provision the chicks (Davies, 1939). Pigeon “lactation,” as well as parenting behavior, is hormonally regulated by prolactin, as is the case in mammals (reviewed in Horseman and Buntin, 1996). The time course of pigeon lactation also parallels many mammals. There is a period of exclusive milk feeding of chicks, and an increase in milk “volume” until mid-lactation is reached, after which production volume subsequently decreases (Vandeputte-Poma, 1980). Like mammals, the duration of lactation varies considerably between individuals. Moreover, just as in mammals, pigeon milk does not just contain macronutrients, but also immunofactors and bacteria (Goudswaard et al., 1979; Shetty et al., 1990).

Recently, Gillespie and colleagues reported an experimental model that demonstrated new functional properties of pigeon milk in the gut of chicks (2012). The gut associated lymphoid tissue (GALT) is a critical interface between the immune system and the gut bacteria. Additionally, the GALT produces a significant portion of immunoglobulin A (IgA) in humans, about 60% of total IgA. Feeding pigeon milk to chickens significantly altered gene regulation in the GALT, upregulating >1500 genes and downregulating ~600 genes. Of note, upregulation was detected in immune-specific genes for cytokine production and B cell activation and proliferation. As a functional outcome, feeding chickens the pigeon milk resulted in significantly greater IgA expression in the ileum compared to controls (Gillespie et al., 2012).

Moreover, intestinal microbial composition differed between chickens fed pigeon milk compared to controls. Chickens fed pigeon milk had a greater diversity of bacteria, determined using 16S amplification, at the levels of phylum, class, order, family, and genus compared to control subjects. Lactic acid bacteria, important for inhibiting the growth of pathogenic bacteria (Jin et al., 2011), were more diverse in the pigeon milk-fed chickens. Sixteen different species were present compared to 12 in the control chickens. Pigeon milk may contain prebiotics that support the colonization of beneficial gut bacteria, although the authors did not directly investigate such milk constituents. However, the researchers did examine the vertical transmission of bacteria through milk. The presence of bacteria in the pigeon milk was correlated with the presence of the same bacteria in the intestine of the chickens that were fed the pigeon milk, showing that bacterial inoculation occurs through milk feeding as in mammalian species (Martin and Sela, 2012).

Importantly, Gillespie and colleagues used chickens rather than pigeons because crop milk is obligatory for pigeon chick survival, and there are seemingly no options at this time for a “control” comparison group that receives a milk replacement formula. There is no more compelling evidence, to my mind, that crop milk serves critical functions in the newly hatched pigeon chick. Further experimental studies in other bird models will illuminate the mechanisms by which milk causes chicks to thrive beyond immune function and bacterial colonization, such as hormones digested through milk. One very interesting avenue is that in placental mammalian milks, prebiotic constituents are complex sugars (oligosaccharides), but pigeon milk does not seem to contain carbohydrates (Davies, 1939). However, technological advances in detecting and quantifying milk constituents may change our understanding of pigeon milk composition.

These results from pigeons are similar to findings in mammals. Among mammals, mother’s milk influences intestinal immune development and influences microbial diversity directly through both the bacteria present in milk and containing constituents preferentially consumed by beneficial bacteria (Donovan et al., 2012; Neville et al., 2012; Martin and Sela, 2012). Taken together, the results from pigeon milk reveal what is known as “convergent evolution” between avian and mammalian milks. The production of milk independently arose after the divergence of avian and mammalian lineages over 300 million years ago. However, these milks seemingly serve the same function: body-nourishing, bacteria-innoculating, immune-programming substances produced by parents specifically to support offspring development.