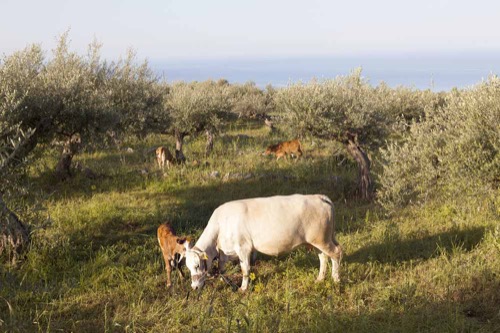 Dairy is deeply embedded in human history. It was exploited from pre-historic times as a source of food and likely emerged very soon after the domestication of ruminants. When and where it was used and its role in the birth and development of human societies is a very active area for scientific research. Was it part of a more complex mixed diet that developed with more complex social structures? Was it relied upon to sustain survival in pioneer human communities that ventured into new territory to avoid conflict, or simply to find suitable land for growing herds of domesticated animals? A study by Spiteri et al. [1] analyzed new and existing data from across the northern Mediterranean to decipher the preference for dairy milk in communities that settled these regions between 7,000 and 9,000 years ago.

Evidence for dairy milk as a food is seen at least as early as 9000 years ago, and has been interpreted to mean that dairy had its origin soon after herding began and animals were domesticated, sometime between 10,000 and 11,000 years ago in the regions of the fertile crescent of the Near East [2]. The migration of farming people from the Near East into Europe occurred during the mid-late Neolithic period and coincided with the movement of herds of domesticated animals and the rise of farming communities. Subsistence of these communities is the subject of intensive investigation by scientists.

The relative importance of milk exploitation in the subsistence diets of migrating communities as the Mediterranean basin was populated has been an active area of discussion and debate. A study published in November 2016 in PNAS [1] presents new evidence that milk was a regular part of diets as far west as the Iberian Peninsula (modern-day Spain) as far back as 8000 years ago, but the pattern of use varied, so that in some societies further to the east, meat predominated or was perhaps used exclusively.

There are two approaches that scientists can use to detect or infer dairy farming. One method involves the direct measurement of lipids or fats that are characteristically found in milk. The composition of fat is determined by the concentrations of different molecules in the fat and how they are arranged into their structural backbone. Traces of these fats survive for thousands of years and can be found attached to pottery fragments that were once vessels used to carry or process milk and other animal products. The traces are scraped from the ceramic remains and analyzed molecule by molecule using modern methods for separation and natural isotope detection. This has the advantage of direct measurement of the milk fats, and also relates the findings to the pottery used by communities at various stages of cultural development. The age of the pottery provides evidence of the stage of cultural development and complements other methods of determining age, e.g., carbon dating.

What about communities where pottery was not in use or not yet available? The study by Spiteri et al. [1] also used a method based on archaeological analysis of bones. The advantage of using animal bones is that they are concentrated in locations that were used for slaughter, and they can provide data on the age range and species of origin. The data can be used to interpret the main purpose of the animal’s use; e.g., the age of slaughter will reflect whether an animal was used primarily for meat, or whether it was consistent with the use of animals for milk. These data can also provide information about farming practices and diet in communities where there was no use of pottery. By combining these methods, the scientists were able to build a picture of the relative use of caprine (goats and sheep) or bovine (cattle) sources of milk in 82 archaeological sites across the northern Mediterranean and Near East that dated to between 7,000 and 9,000 years ago.

The data analysis revealed that most communities harvested milk for dietary purposes. This was greatest around the Sea of Marmara in modern day Turkey, where over 70% of samples analyzed contained dairy fats, but even in the region around modern-day southern France and Spain, 60% of samples contained dairy fats. Another feature of the study was the range of sites from where samples were collected. Some of these sites suggest that the farmers engaged in early forms of intensive dairying, mostly in caves that were suited to restraining or protecting the dairy animals.

Milk was not used extensively in all communities surveyed. The most striking variation to the pattern was in northern Greece and the Aegean, where animal bones were mostly from pigs, and where other bones from ruminants indicated they were clearly used for meat. The varied proportions of meat use compared to milk reflects a diverse mixture of animal use across the region. The reason for this is not evident, but the variation probably arose from a complex range of factors that were related to terrain, climate, and social customs.

Interestingly, the adoption of milk as a food predates the emergence of the lactase persistence gene variant that provided human adults with the capacity to break down the milk sugar lactose [3]. However, it has been inferred from previous studies that cultured milk, or some form of cheese, was present from early herding communities. The treatment of milk in this way makes it digestible even without the capacity to break down lactose, so it is reasonable to think that this dairy technology traveled with the migrating farmers, or was adopted by people who learned from the migrating farmers.

It is fascinating to contemplate the sophistication in herding and farming from such an early age that emerged alongside, or perhaps even initiated the birth of, social structures along the northern Mediterranean fringe. The mobility of these farming practices opened new frontiers, apparently seeding and sustaining societies by providing subsistence dietary requirements. But more than that, farming became a vehicle for technological advances that were to provide an impetus for the development of more complex human cultures.