Milk Lactose From A to Zebra 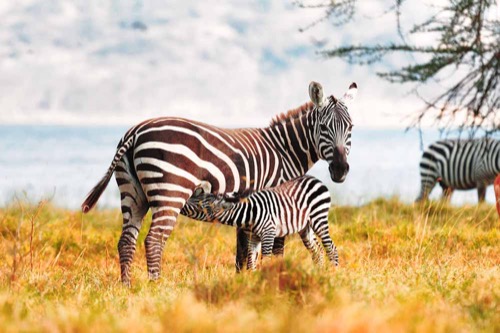 If you have a hard time digesting lactose from cow’s milk, you may want to avoid drinking monkey milk. Rhesus macaque monkeys produce milk with 8% lactose, almost twice the amount found in cow’s milk. With a barely detectable quantity of lactose, a better option for intolerant individuals would be milk from grey seals (that is, if you can get past that it is also 70% fishy-tasting fat and probably not the most appetizing choice for your morning bowl of cereal).

Understanding why rhesus monkeys make such high-sugar milk, grey seals make such low-sugar milk, and why other mammals, like cows, are somewhere in between requires consideration of both what the offspring needs to grow and develop and what the mother needs to maximize her reproductive success. Far from just a story about sugar, understanding lactose variation in milk is a story of mammalian adaptation and diversity.

Lactose synthesis seems like a complicated process—why don’t the mammary glands simply pass on the monosaccharides glucose and galactose in milk instead? One reason may be because complex molecules offer an advantage over single molecules [2]. Osmotic concentration is a measure of how many molecules are in a solution; one lactose molecule has half the osmotic concentration of two monosaccharides. Because lactose exerts less osmotic pressure per unit mass than glucose, more carbohydrates can be transferred in milk while maintaining the same ion concentration (aka isosmotic) as the mother’s plasma [1].

The fact that lactose is a unique sugar offers another advantage to mammals. Bacteria love to dine on sugars, and most carbohydrate macronutrients in nature contain only glucose. Only bacteria that evolved the ability to digest lactose would be able to colonize milk (either in the mammary gland or the digestive tract of the infant) [2]. Thus, the novelty of lactose may have offered a protective effect, for both mothers and infants, against a large number of microbes in the environment [2].

Lactation is an evolutionarily old adaptation. Mammals that lay eggs (monotremes, such as the platypus), mammals with pouches (marsupials, like the koala), and mammals with placentas (eutherians, like humans) all lactate but diverged more than 100 million years ago. This suggests lactation may be even older and have its origins from a pre-mammal ancestor over 150 million years ago [1].

Lactose may not have been on the ingredient list in the first milks—at least not on its own. Monotremes and marsupials are the oldest mammal lineages and have oligosaccharides (carbohydrates made of 3–10 monosaccharides) as their primary carbohydrates [1-3]. Their milks are not completely lactose free—there is usually a lactose molecule at the end of the sugar chain—but they lack any free lactose molecules [2]. Coupled with this observation is the small amount of alpha-lactalbumin made by monotremes. Urashima [3] have argued that this was the ancestral condition: the first milks contained oligosaccharides and most likely lacked any free lactose. Over time, mammary glands began to make more alpha-lactalbumin, which in turn increased the production of lactose. Finally, lactose became an important energy source for some marsupials and eutherian infants, and was produced separately from oligosaccharide chains [3].

Many mammalian milks have little to no lactose [2], indicating that, despite being an ancient milk ingredient, it is not required for mammalian development. Take, for example, bears, which astonishingly give birth and lactate while hibernating (and by extension, while fasting). Bear mothers cannot replenish resources in the den, and milk production must, therefore, balance the nutritional needs of the bear cubs with the survival of the mother. The mother’s main concern is conserving glucose, to fuel her brain, and water [4]. Both of these go hand-in-hand with lactose. Lactose creates an osmotic gradient and draws water into the cells of the mammary gland; the higher the concentration of lactose, the more water (and thus, the more dilute the milk) [2]. High-fat, low-sugar milks are the solution. Fat, unlike carbohydrates, can be stored for a rainy (or milky) day. And if you are a large mammal, like a bear, you can store enough fat to provide energy for your growing cubs during hibernation [4].

Whales and seals may not hibernate, but they do lactate while fasting, and not surprisingly also produce high-fat, low-sugar (and water) milks [2, 4]. Their large body size allows them to store large amounts of fat, allowing for some remarkable adaptations. The blue whale gains nearly 100,000 pounds of blubber during pregnancy to maintain lactation for roughly six months [5]. The hooded seal only lactates for four days, but in this time transfers approximately 60 pounds of fat to her offspring [2, 4].

For fasting bears, whales, and seals, the production of high-sugar milks (which are synonymous with high water and low fat) would quickly deplete maternal glucose and water stores, and fail to support infant growth and development. For primates (a group that includes humans, apes, monkeys, lemurs, lorises, and tarsiers), the opposite scenario is true. Primates nurse for longer than would be predicted for mammals of their body size. To put it in perspective, a 12,000-pound elephant nurses for roughly the same amount of time as a 40-pound chimpanzee. The production of high-fat, low-sugar milk among primates would quickly deplete maternal resources [6]. Moreover, most primate species nurse on demand. Frequent nursing stimulates lactose synthesis in the mammary gland, which subsequently increases milk’s water content [6].

The relationship between lactose and water also is clearly demonstrated when looking at milks of mammals, such as zebras, that live in arid environments [6]. Zebra milk is nearly 90% water, and the milk lactose concentration is similar to that of milk from primates (around 7%) [2]. In zebras, selection favored increased lactose synthesis and extremely dilute milks to prevent dehydration in infants with high water turnover; in primates, selection favored the production of low-energy milks to support an extended infancy period [2, 6]. This is an exquisite example of convergent evolution; two different evolutionary lineages converged on the same solution (high sugar milks) to solve different problems.

Lactose is probably best known as the sugar that causes intestinal discomfort in the majority of humans. But taking a step back and looking at lactose across mammals puts it in a much more positive light. Many adult humans may be lactose intolerant, but human infants, like all primate infants, are highly dependent on lactose for successful growth and development. Indeed, much of the diversity we see in mammals’ life history patterns and ecological niches is only possible because of this unique and complex sugar.