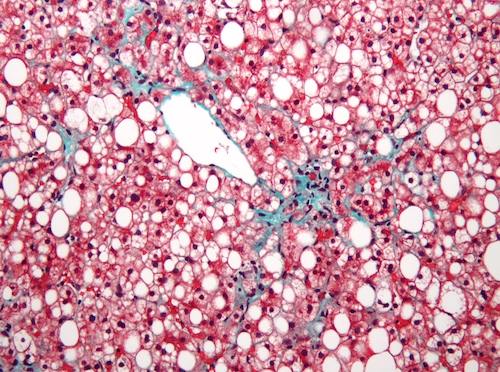 This wonder glycan is called “lacto-N-fucopentaose III,” or “LNFPIII” for short. To understand what’s so cool about LNFPIII, let’s first review how the body handles energy from food and what happens when people chronically eat way more food than they should. Yes, they get fat, but other less visible, yet nefarious things happen, too.

Glucose and fat: The currencies of energy

Glucose is a convenient fuel for the body, readily used by all tissues, while triglycerides (fats) are more compactly stored. The liver acts as a Currency Exchange booth, converting fat to glucose or glucose to fat, depending on whether the fuel is to be burned or stored.

After eating, glucose rises in the blood, and the pancreas releases insulin, which is like a messenger that goes around telling all of the cells, “Hey, get your glucose.” If a person has lots of glucose in their blood all the time (like if a person never stops eating), the cells stop listening to the insulin messenger. They think, “Oh, that guy again,” if they even hear him at all. This is called “insulin resistance,” and it’s a growing epidemic among people who eat too much and move too little.

Amazingly, LNFPIII convinces fat cells to respond to insulin again. In other words, it improves “insulin sensitivity,” at least in mice that became obese as a result of a high-fat diet. Until now, the only natural cure for insulin resistance was the dreaded E-word: exercise.

Just how does LNFPIII convince fat cells to respond to insulin? Ah, the plot thickens (read: gets muddier). Interestingly, it involves resident immune cells (macrophages) that stand guard in every tissue in the body, waiting for a pathogen to appear. There are two types of macrophages: M1 and M2. M1 macrophages are like warriors. When they sense a foreign invader, they spew pro-inflammatory signals somewhat indiscriminately, often causing collateral damage to innocent neighbors. The M2 macrophages are like “peace keepers.” They repair the damage caused by the warrior M1s.

When cells detect LNFPIII, they produce an M2-like, pacifying signal (IL-10) to dampen the effects of the warriors. In addition to this anti-inflammatory effect, the pacifying signal also causes neighboring fat cells to upregulate insulin receptors and their friends. With more receptors to detect insulin, the cells can “hear” the message to consume glucose again. “Insulin resistant” transforms into “insulin sensitive.”

Foie gras, not so tasty after all

When a person chronically overeats, their liver goes into fat-making overdrive. Instead of packaging the fat to be sent to other tissues, so much fat is produced that it gets stuck in the liver. This is called nonalcoholic fatty liver disease, or hepatosteatosis. Or “foie gras,” in the case of a force-fed duck.

LNFPIII transforms the liver: fat production slows, fat destruction quickens. And this is not merely a nice side-effect of the improved insulin sensitivity of distant tissues. LNFPIII exerts these effects locally as well as systemically.

Milk is the drug

No pharmaceutical can deliver such multi-modal positive health effects. Someone, somewhere, must be productizing LNFPIII. In the meantime, the choice is parasitic worms or human milk.