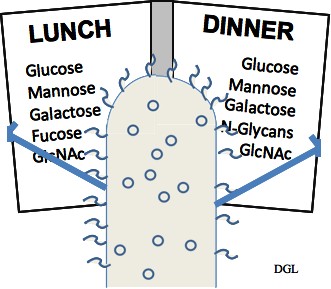 If a bacterium walks into a Bar & Grill, what does he order to eat?

If there are any simple sugar molecules on the menu, such as glucose, galactose, or mannose, then he’ll order a plate of them. But given that these simple sugars are the first choice of pretty much any type of bacteria, the Bacteria’s Bar & Grill is likely to run out quickly. Then what?

Some bacteria can eat linear polysaccharides (strings of simple sugar molecules) like fructooligosaccharides (FOS), galactooligosaccharides (GOS), and inulin. If the simple sugar galactose was drawn as a Stick Man, then GOS would be several Stick Men holding hands. Likewise, if fructose is a Stick Woman, then FOS is several of them holding hands. Inulin is a lot like FOS, except there are a lot more fructose molecules—20 to 1000s—and there is usually one glucose molecule at the end. So, in our Stick Person Chemistry world, if we assign glucose to be a Stick Child, then inulin would be a string of hundreds of Stick Women holding hands with one Stick Child holding the last woman’s hand. 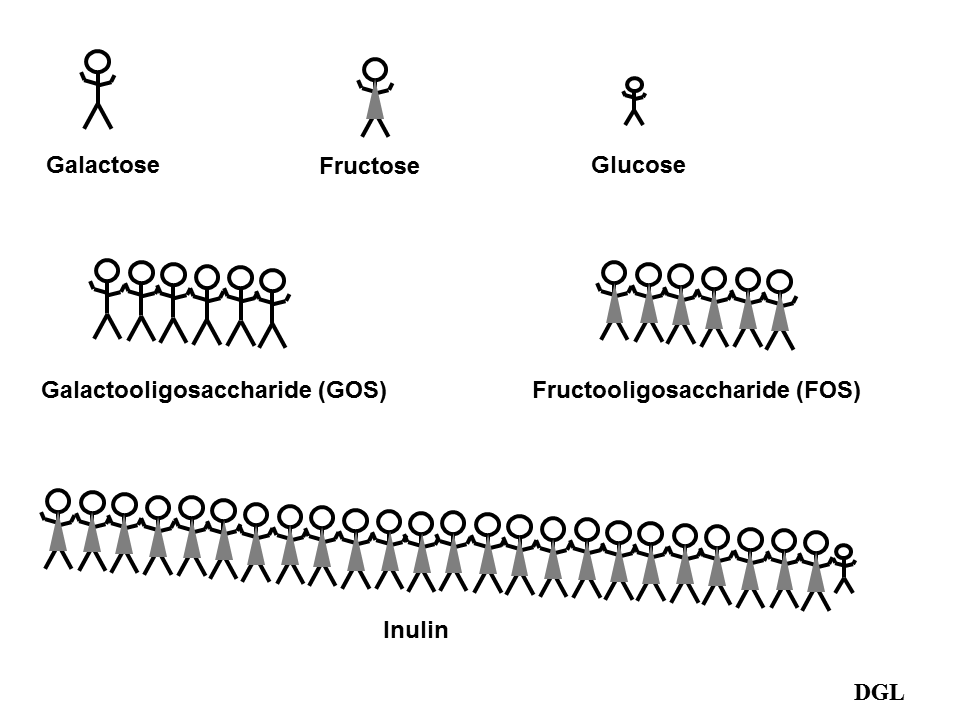 While we people eat FOS, GOS, and inulin, they are indigestible by our own digestive enzymes, leaving them available in our guts for bacteria to digest and absorb. However, not all bacteria can digest polysaccharides. Bacteria that consume only simple sugars like glucose would generally starve in the human colon because such sugars are completely absorbed much earlier in the digestive tract.

Even fewer bacteria can digest the complex sugars in milk. These milk sugars (milk oligosaccharides) contain a greater diversity of simple building blocks, so our Stick Person Chemistry is about to get more complicated. In addition to glucose and galactose, we now include fucose, GlcNAc, and Neu5Ac. Fucose is a simple sugar like glucose, but missing a hydroxyl group. In other words, fucose is like glucose but smaller, so let’s say that fucose is a Stick Baby. Another milk sugar building block is N-Acetylglucosamine (GlcNAc), which is something like a glucose molecule plus a nitrogen and an acetyl group (two carbons and an oxygen). It is different from glucose, our Stick Child, so let’s represent large GlcNAc with a Fat Stick Man. The final milk sugar building block we’ll introduce is N-Acetylneuraminic acid (Neu5Ac, a sialic acid), which is even more complex than the bulky GlcNAc we just met, carrying several extra carbons and hydroxyl groups (OHs). Neu5Ac is Morbidly Obese Tall Stick Man who is too big to even find clothes at the Big & Tall store. 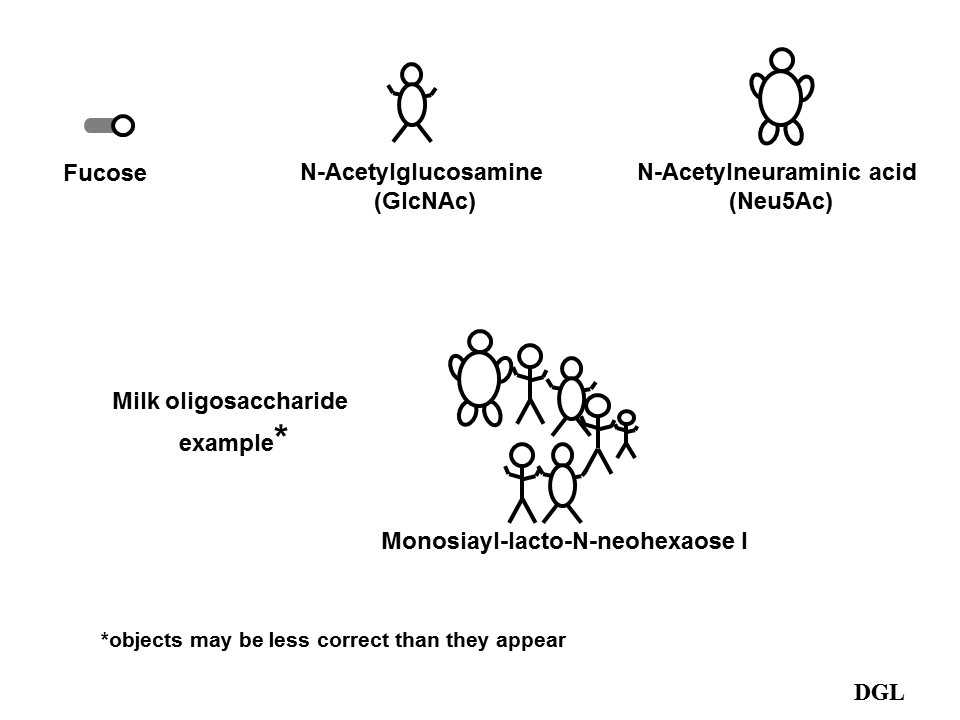 So what do milk oligosaccharides—those special sugars unique to milk—actually look like? Well, they’re really complicated: picture a jumble of Stick Men, Stick Women, Stick Children, Stick Babies, Fat Stick Men and Morbidly Obese Tall Stick Men all joined together in myriad ways: some by hands, some by feet, some by the arm, some at the hip. Despite the complication, there appear to be less than 200 unique oligosaccharides in human milk [1]. So, while thousands of these Stick People Jumbles are theoretically possible, hardly any of them actually exist in nature.

Very few types of bacteria that walk into the Bacteria Bar & Grill would order milk oligosaccharides because they can’t digest them. Digestion of these milk sugars requires an arsenal of special enzymes—fucosidases, sialidases, etc.—to break apart the unique bonds (joined hands, feet, arms, hips) in the Stick People Jumbles. Bifidobacterium longum subsp. infantis (B. infantis), which populates the guts of breastfeeding infants, is able to digest milk oligosaccharides [2]. In 2008, David Sela and colleagues discovered the particular arsenal of enzymes in B. infantis that enables this special bacterium to digest complex sugars that are unique to milk [3].

Last month, we explored how most proteins have sugars attached to them. Yet the sugars we have discussed so far—Stick Men, Women, etc. and even the Stick People Jumbles—are all floating free of proteins. While Sela et al. found that B. infantis can eat Stick People Jumbles, can it eat them even when they are attached to proteins?

Before bacteria can eat sugars attached to proteins, they first have to be able to separate the sugars from the proteins. This requires—you guessed it—more special enzymes. Last month, Daniel Garrido and colleagues published the secret weapon of B. infantis, a special enzyme called EndoBI-1 (an endo-beta-N-acetylglucosaminidase) that cleaves a special type of sugar from proteins [4]. Most proteins in milk have sugars that are attached very strongly to the Nitrogen of specific amino acids in the protein (usually the amino acid asparagine), and they are therefore called N-linked. These N-linked sugars contain various types of Stick People Jumbles that are hard to reach and cleave even for “professional” (i.e. store bought) enzymes, especially when the Morbidly Obese Tall Stick Man and the Stick Baby are present. And yet, astoundingly, B. infantis can chop any of these Stick People Jumbles off of the protein. So now we have this amazing bacterial species that can liberate any complex N-linked sugars from milk proteins and can easily consume them in their own privacy, away from the other bacteria at the bar.

If this secret weapon wasn’t potent enough, there’s one more thing. EndoBI-1 works in every condition. Most enzymes will unravel in hot water and become incapable of performing their normal functions. Even after 5 minutes in boiling hot water, EndoBI-1 can still cleave Stick People Jumbles. As a weapon, EndoBI-1 is not just a sword, it is Excalibur—the sword that makes B. infantis the King of Bacteria.

The bottom line is this: when B. infantis walks into the Milk Bar & Grill, it can order pretty much anything on the menu.