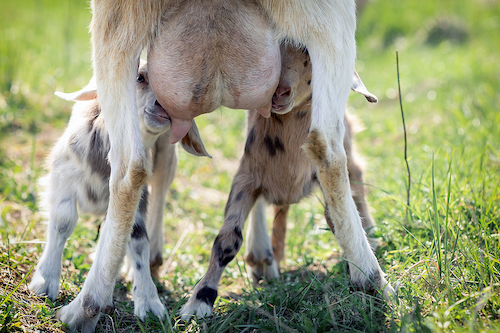 Low-fat, reduced-fat, whole-fat—we talk about milk fat as if it were a singular ingredient, when milk fat is actually made up of several thousand different fats. Mammalian milk fat is, in fact, the most complex lipid in nature [1]. A new research field, called lipidomics, allows researchers to quantify this complexity, by identifying and measuring all the thousands of fats at once.

For the first time, this systemic approach was applied to milk fat from multiple mammalian species, including humans, pigs, and cows [2]. Just as genomic comparisons across species can identify conserved genetic traits and those that are unique to a species, comparing milk lipidomes can uncover fats shared across mammalian lineages as well as species-specific patterns in milk lipid composition.

The study focused on triglycerides (TGs), which make up 98% of milk lipids. TGs are comprised of three fatty acids attached to a glycerol backbone. Their diversity comes from the combinations of fatty acids, of which there are hundreds [1]. From seven mammals—humans, rhesus macaque, crab-eating macaque, pig, cow, domestic yak, and goat—the researchers detected 472 distinct types of fat [2]. Eighty-five percent of these fats demonstrated intensity differences among species. For example, cow milk had more TGs made up of long-chain monounsaturated fatty acids, human milk had more TGs with medium- and long-chain polyunsaturated fatty acids (LCPUFA), and pig milk, which was the most distinct, had more TGs made from LCPUFA and very-long-chain PUFA (VLCPUFA) [2].

The researchers suggested that the higher LCPUFA and VLCPUFA in pig milk could reflect the need to pass on essential nutrients in a relatively shorter lactation period (pigs usually nurse for just over a month, whereas cows nurse for up to 10 months, and humans can nurse for several years) [2]. In humans, however, higher quantities of LCPUFA and a distinct lipidome profile from the two other primates included in the study were hypothesized to represent an adaptation to increased requirements for neonatal brain growth. The authors go on to argue that their results “show that after the human-monkey species’ divergence approximately 30 million years ago, human ancestors started to produce milk with a higher abundance of [TGs] containing long-chain fatty acids with high levels of unsaturation” [2].

This proposition fits nicely with our understanding of fatty acids and brain growth. In mammals, brain growth is associated with increased incorporation of LCPUFA, particularly omega-3 LCPUFA such as docosahexaenoic acid (DHA), in neural tissues. The faster the brain is growing, the more LCPUFA it is incorporating [3]. Humans, relative to other mammals (including other non-human primates), have a unique pattern of postnatal brain growth; they continue to grow their brain at the fetal rate of growth for the first 18 months of life [4]. All of this suggests that human infants, relative to other primates and mammals, would have an increased need for milk LCPUFA, which would be reflected in increased production of milk LCPUFA by human mothers.

Unfortunately, the lipidome study lacks sufficient data to support this evolutionary hypothesis. Fatty acids are the most variable milk nutrient, particularly LCPUFA. The mammary gland is unable to make LCPUFA; milk LCPUFA represent LCPUFA from the mother’s current diet, LCPUFA from maternal fat stores (representing the mother’s past diet), or synthesis from precursor fatty acids that come from the maternal diet [3]. The lipidome study included only 19 human milk samples from two human populations (Russian and Chinese) and did not control for or discuss their results in the context of diet.

The same can be said for their non-human primate data, represented by only two milk samples from each of the two monkey species. It is not specified, but one can assume that these are captive-living monkeys and could be consuming diets that differ from their wild counterparts in the types and quantities of fatty acids. As such, they are unlikely to represent “monkey milk fatty acid patterns” in a way that would permit discussions of evolutionary divergence in milk composition.

My colleague Richard Bazinet and I previously demonstrated [5] that captive and wild-living primates have distinct milk fatty acid profiles due to differences in preformed sources of LCPUFA in their diet, the same phenomenon seen in cross-cultural studies of human milk fatty acids [6]. Captive-living primates are often fed Monkey Chow, which can contain soy, corn, or vegetable oils as well as dried fish meal, all of which are sources of LCPUFA that would be lacking in a wild diet. As a result, many of the non-human primate milks we studied exceeded human milk in the proportion of LCPUFA, even DHA. Contrary to the lipidome study, we found that human milk fatty acid profiles fit well within a larger anthropoid (i.e., monkeys and apes) pattern rather than demonstrating a distinct composition [5].

In addition to diet, there are several known genetic variants that can influence the concentration of milk LCPUFA, such as the FADS1 and FADS2 genes, which code for enzymes that influence PUFA metabolism [7]. It was surprising that both maternal diet and genetic variants were mentioned in the lipidome paper’s introduction as factors that could influence milk fat composition but were not discussed in the context of the results.

Milk fat is the most complex lipid in nature. And lipids, because of their interaction with maternal factors like diet, might be the most complex nutrient to study in milk. Lipidomics, when integrated with maternal dietary and genetic data, could be the ideal way to capture the complexity of milk fat composition and investigate shared and unique features across mammalian milks.