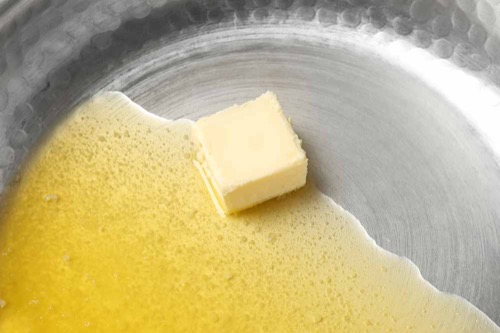 The fat component of milk is not sludgy and unstructured, as most people imagine. Rather, it is a complex mixture of different kinds of lipid molecules organized into membrane-bound bubbles called milk fat globules. Common fats, or triglycerols, occur in the middle of these globules. Fats that are known to have various regulatory functions, such as sphingolipids, phospholipids and glycolipids, are found in the surrounding membrane. Because these membranes have been found to have positive effects on human physiology beyond raw energy provision, scientists have gathered evidence that consuming milk fats—that is, whole globules, core and membrane combined—can be on-balance health promoting. Now researchers based mainly in Lyon, France, led by Marie-Caroline Michalski, have shown that when healthy mice consume butter serum, which is rich in milk fat globule membrane, on top of a high-fat diet, the mice gain less weight than when they eat a high-fat diet lacking this addition. Surprisingly, consuming the high-butter serum diet also led the mice to gain less weight than when they consumed less energy in the form of a low-fat diet.

Michalski and her colleagues fed the mice in their experiment butter serum, which is the watery part of butter [4]. “If you take butter and put it in a frying pan, the first thing that happens is you bubble off the water—that’s butter serum,” explains Bob Ward, an associate professor at Utah State University, who spent his sabbatical year working with the Lyon-based research group behind the recent findings. “It’s basically a component of butter that has been separated from the triglycerides, so it’s a particularly rich source of milk fat globule membrane.”

The experiment involved four groups of 15 mice each. For eight weeks the mice received different diets, while their body weight and food intake were monitored. The reference group received a low-fat diet of vegetable matter, known to scientists who work with mice as “chow.” A high-fat control group ate chow mixed with palm oil. Two treatment groups also got the chow and palm oil diet, however, their food either contained an addition of a small amount (1.9%), or a more significant amount (3.8%), of butter serum. “One of the points they make in this paper is that they are working with chow [as opposed to completely purified diets]. I think that’s important for gut studies because a lot of purified diets don’t have much fermentable substrate for gut bacteria,” says Ward. This also adds weight to the findings. “It’s a bigger challenge to show an effect in this model than using a purified diet,” he adds.

“The first law of thermodynamics states that something has to be happening,” says Ward. Michalski’s team checked that the results were not due to mice on the high-butter serum diet less efficiently absorbing nutrients from food: they did this by drying the mice’s feces under a stream of nitrogen, crushing the feces with a pestle and mortar, and then analyzing the lipid contents. Instead, the explanation appears to have something to do with metabolic changes. “I think the hypothesis would be that these mice are being more active,” adds Ward.

Further studies are needed to understand the mechanistic details. Although the paper reports some changes in the microbiomes of the mice in the different groups—such that the intestines of the high-butter serum group harbored less Lactobacillus reuteri—in Ward’s view, the diet-induced microbiome shifts were subtle, and probably insufficient to explain the main result. Michalski’s team also reported decreases in gene expression levels of a macrophage marker in the liver cells of the mice fed the high-butter serum diet, however it is unclear whether this explains the findings either. Gaining body fat is linked to higher levels of these immune cells in the liver, but one would expect this to occur alongside a rise in inflammation [5], which Michalski’s team did not find. Overall, they conclude that more research should be done to better understand what exactly it is about consuming lots of milk fat globule membrane that seems to make it possible for mice to eat so much energy and gain so little weight.

It is even harder to understand what this work implies for human beings. Clearly, if the results are replicated in people, all kinds of food supplements to treat obesity could soon appear on the horizon. That said, many findings that have been reported in mice do not straightforwardly correlate to health effects in humans. If these extraordinary results are replicated and the mechanism behind them elucidated, however, the physiological insights might offer ideas for how to better create foodstuffs to help folks who struggle with their weight.