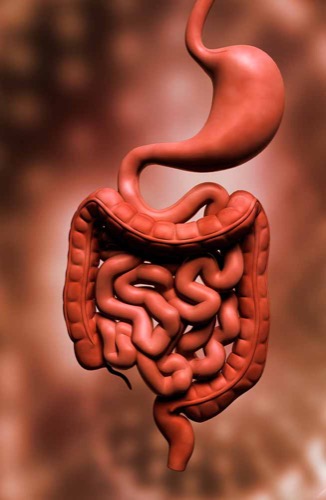 If left to settle, fresh whole milk separates out into an aqueous phase on the bottom and a lipid (or cream) phase on the top. The lipid phase adds more than calories to milk. Hidden in this lipid layer are brain-building molecules like DHA and fat-soluble vitamins like vitamin A. But in order for these lipid-bound components to do their job, they need to get from the digestive tract to the circulatory system. Just how is this accomplished?

For all the research that has been done on the importance of milk fat for infant growth and development, we know surprisingly little about the process of milk fat digestion. A new study by Salentinig et al. (2013), using store-bought homogenized and pasteurized cow’s milk, demonstrates for the first time that fats in milk self-assemble to form highly ordered “nanostructures” not seen in the digestion of other dietary fats. And importantly for consumers of milk, these nanostructures increase the absorption of milk fats and all the other good things that are part of the lipid layer. Milk fat, it appears, is built for digestion.

Fat digestion requires making fats more soluble so they can be absorbed into the intestine and transferred to the circulatory system. One of the primary ways this is accomplished is through the activity of digestive enzymes called lipases. Lipases break down the most common type of dietary fat, triglycerides (three fatty acids on a glycerol backbone), into a monoglyceride (one fatty acid and a glycerol) and two free fatty acids, which can then be absorbed by the cells of the small intestine.

There’s just one catch—lipase enzymes are water-soluble and, therefore, only able to work on the surface of the fat molecule. But in the aqueous environment of the digestive tract, the hydrophobic (“water-fearing”) fat molecules are attracted to one another and form large fat masses. Here’s where bile enters the story (or, rather, the intestine). Bile breaks large fat globules into smaller fat particles in a process known as emulsification. These emulsified fat droplets have a larger surface area (relative to their internal volume) and thus can more easily be digested by lipase.

From micro to nano

When it comes to fat digestion, the smaller the better. Emulsified fats—those that have been broken down into smaller droplets—are more rapidly digested by lipase. But milk fat, unlike fat from vegetables or animals, is already present as part of an emulsion (small fat droplets dispersed into an aqueous solution). How might milk fat’s unique structure influence its digestion?

To address this question, Salentinig et al. (2013) did experiments in test tubes to simulate milk digestion by the intestine. When milk fat enters the digestive tract, they are micrometer-sized emulsion particles. However, when they reached the intestine, Salentinig et al. made a surprising discovery. Instead of grouping together to form larger fat masses, milk fat self-assembled into even smaller emulsion droplets. These nanometer-sized structures (or nanostructures) have a high internal surface area, facilitating the action of lipase.

The key phrase to highlight from the previous paragraph is “self-assembled.” Although smaller fat molecules are usually formed by the action of bile, Salentinig et al. observed the formation of these nanostructures even in simulations of milk fat digestion that lacked the addition of bile acids.

No bile, no problem

Why might other dietary fats require bile for digestion whereas milk fat does not? Salentinig et al. propose an adaptive explanation. Newborns and infants have reduced bile production, but are also dependent upon milk fats for brain growth and development, immunity and even skeletal growth. The self-assembly of nanometer-sized milk fats may have evolved as a compensatory mechanism to ensure the delivery of fatty acids, fat-soluble vitamins and other bioactive components from milk to the developing infant’s circulatory system (Salentinig et al., 2013).

This is an exciting evolutionary hypothesis, suggesting that milk fat digestion may be adapted to the digestive chemistry of the infant gut. But Salentinig et al. are quick to highlight that infants are not the only consumers of milk that may have compromised bile production. Humans living with gall bladder or liver issues and the elderly have difficulty with fat digestion because of poor bile production. If bile salts are not required for milk fat digestion in adults, milk and milk-derived products such as yogurt and cheese may provide superior sources of dietary fat. Nanostructure formation might have evolved as a mechanism to facilitate milk fat digestion in infants, but it may prove to be advantageous for millions of adults.