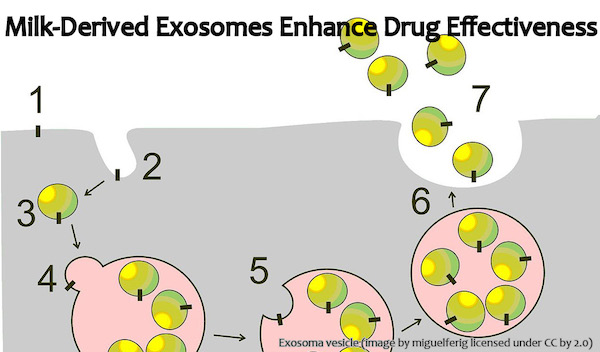 Delivering parcels around the world is a tough business. The company must deliver an individual parcel to the correct address, on time and without damage. A problem in any one of these areas results in a very unhappy customer. Ideally, the delivery of a therapeutic drug to a specific diseased tissue within a person has similar stringent requirements to the delivery of a parcel.

Luckily, nature has already mastered the intricacies of accurately delivering chemical parcels between the tissues of an individual. Using nature for inspiration, a research group led by Ramesh Gupta from the University of Louisville recently highlighted a new approach for improving therapeutic drug effectiveness by artificially packaging drugs in milk nanoparticles called exosomes [1-4]. The group also may have identified a future business opportunity for the dairy industry. Their principal research was published in Cancer Letters in 2016 [1].

Gupta and many others have demonstrated that milk, like most body fluids, naturally contains secreted exosomes that enable biological communication between tissues within an individual [1, 4-14]. An exosome is a very small secreted particle, typically measuring less than 100 billionths of a meter in diameter, i.e., about one-thousandth the diameter of a human hair and only a small fraction of the diameter of a cell. An exosome is structurally characterized by a phospholipid coat wrapped around a biochemical cargo consisting of an assortment of molecules that change the functions of target cells. Exosomes release their cargos into target cells in other tissues, sometimes in a highly specific way through the joint action of specialist proteins embedded in the phospholipid coat of the exosome and partner proteins on the target cell surface. Scientists are still discovering the natural functions of milk exosomes, but there is consensus that they probably provide maternal help to enhance offspring immune defense systems and accelerate maturation of offspring gastrointestinal tissues.

Gupta and colleagues initially identified a highly efficient process for purifying exosomes from cow’s milk [1]. They noted that the process is potentially scalable to a larger exosome production system, which is essential for any commercial application. In contrast, the investigators highlighted the limited availability and lack of scalability of alternative body fluids or fluids harvested from cells grown in the laboratory [1]. After providing comprehensive and convincing evidence that the purified material from milk did indeed have the known physical characteristics of exosomes, the investigators showed that the exosomes were stable when frozen, another commercially relevant attribute [1]. Subsequently, Gupta and colleagues artificially loaded cow milk-derived exosomes with a cargo of fluorescent dye and demonstrated that exosomes delivered the dye into human lung cancer cells grown in the laboratory, i.e., the purified bovine milk exosomes delivered their cargos into cells and were therefore functional.

Gupta and colleagues then loaded cow milk-derived exosomes with different types of chemotherapeutic drugs used to fight cancer and tested the abilities of these drugs to slow the growth of human lung cancer cells grown in the laboratory [1]. They demonstrated that those drugs, when delivered by exosomes to the cancer cells, had enhanced effectiveness compared with a control. Research often turns up the unexpected. The cow milk-derived exosomes by themselves (the control for the experiment) also decreased the growth of the cancer cells but to a lesser extent than the drug loaded exosomes [1]. This result alone is intriguing and it invites further investigations into the natural cargos of the milk exosomes. Finally, the investigators transplanted human lung cancer cells into mice susceptible to developing cancer from these cells and showed that the injected cow milk-derived exosomes loaded with a cargo of an antitumor drug inhibited tumor growth in the mice to a greater extent than did the drug administered alone [1]. How this happened is unclear, but the investigators suggest that the exosomes protected the drug from damage within the body of the mouse and may have preferentially targeted the developing cancer cells.

The investigators’ strategy of using exosomes to improve the effectiveness of drugs not only worked for anticancer drugs. Gupta and colleagues also demonstrated improved effectiveness of anti-inflammatory drugs packaged into cow milk-derived exosomes [1]. Thus, the overall strategy may have broad applications.

Improving the effectiveness of drugs whilst minimizing their side effects is a major aim of the pharmaceutical industry. Gupta and colleagues demonstrated that delivery of drugs packaged into cow milk-derived exosomes was more effective than direct administration of the drugs. This research is preliminary but promising. They also demonstrated the safety of using cow milk-derived exosomes. Gupta noted that the pharmaceutical industry still needs substantial additional research before commercial applications can be available for routine human use. This will take time. However, if the additional research is successful, the dairy industry may have a new commercial opportunity—the production of cow milk-derived exosomes for use in the human pharmaceutical industry.