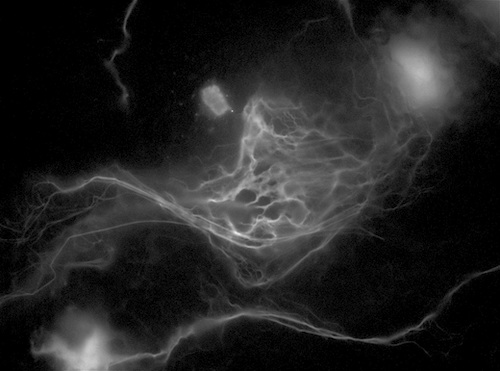 The list of proteins in cow’s milk just keeps getting longer. Tim Reinhardt and colleagues have now discovered nearly 3000 unique proteins in cow’s milk (1). While that would be a story by itself, they also reveal evidence for web-like nets that immune cells secrete into milk when pathogens are present. Yes, milk is cooler than fiction.

Why does the list of milk proteins keep getting longer?

With each publication of the cow’s milk proteome—a catalog of all of the proteins in cow’s milk—the number of proteins in the catalog increases. Why? While mass spectrometry does improve, the biggest gains have occurred in fine-tuned separation of milk into fractions such that the highly abundant proteins in one fraction no longer eclipse the minorly abundant proteins in another. Reinhardt and colleagues have perfected this technique for cow’s milk and published, for the first time, all of the proteins identified in all of the fractions (1). They also included milk from cows with a mammary gland infection (a.k.a. mastitis). With mastitis, an assortment of other immune-related proteins are secreted into milk, and these add to the long list of milk proteins.

What do all these milk proteins do?

Dietary proteins provide a source of building blocks that can then be used by our bodies to build our own proteins. Unlike most plant proteins, milk proteins actually provide a well-balanced assortment of building blocks so that consumers can build the proteins they need without running out of a particular type of block. But milk proteins do even more than that. Some proteins form structures to escort calcium and fat, some are digestion-aiding enzymes, some are antimicrobial, and more. Perhaps the most fascinating milk protein is alpha-lactalbumin (LALBA), which transforms into HAMLET, a protein-fat complex that kills infected cells but spares normal ones (2).

Undoubtedly, the most surprising finding in the latest paper from Reinhardt and colleagues, is the presence of neutrophil extracellular traps (NETs) in the fat fraction of milk. Neutrophils are a type of immune cell, and NETs are a web-like network of DNA and proteins that are secreted by these cells. NETs are able to trap bacteria and kill them (3). While a spider spins a web to catch a fly and then kills the fly with venom, NETs are like both the web and the venom together in one package.

After such compelling work, how is it that the next (and only other) paper on NETs in milk does not occur until 2013? In this next paper, the authors provide proteomic evidence consistent with NET presence and, more importantly, visual confirmation (1). The web-like structure of NETs is an image of beauty. Well, unless you’re a bacterium.

What is next for milk NETs?

The most obvious application for NETs in the dairy industry is in the area of diagnostics. Mastitis is currently tracked in dairy herds using the California Mastitis Test (CMT). The CMT is cheap and simply performed, but has imperfections as it is based on the number of immune cells present, which can change with age or noninfectious sources of inflammation (e.g., injury, irritation). Perhaps NETs, which are specifically secreted in the presence of mastitis-causing bacteria, could be used to design a new diagnostic to complement the CMT?