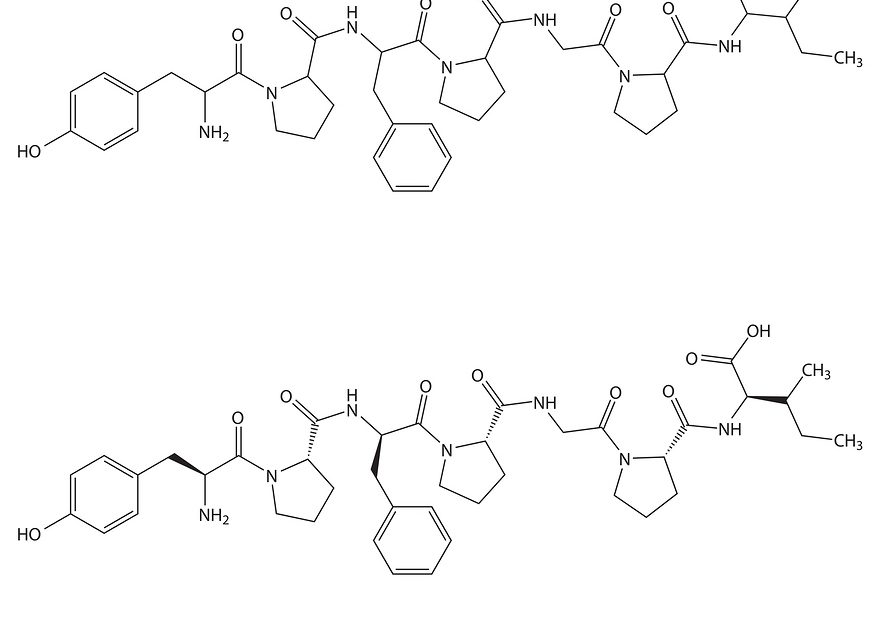 Grab your nearest carton of milk. Find the nutrition label. Under total fat, you’ll likely find information about how much of that fat is saturated, unsaturated, and even trans fatty acids. Under carbohydrates, you’ll learn how much fiber and sugar your milk contains. But there is just one row of information when it comes to protein, giving the false impression that milk protein is not nearly as complex as milk fat or sugar. However, cow milk is made up of two different types of proteins, whey and casein, the majority of which is are caseins. There are four different subtypes of casein proteins, and for each of the four subtypes, there are dozens of different genetic variants. How’s that for complex?

Until recently, just which types of casein proteins were in any given carton of cow milk was never of much concern. But that may be changing with the arrival of A2 milk in dairy cases across the U.S., and claims that some casein proteins are healthier than others. Simply knowing how much protein is in a glass of milk may no longer be sufficient; it’s time to get complex, move beyond the nutrition label, and understand the diversity of caseins in your glass of milk.

Milk of all mammals, from the egg-laying platypus to the social-networking human, contains a mix of whey and casein proteins. In humans, the concentration of the two is almost evenly split, with 60% whey and 40% casein. In cows, caseins dominate, comprising nearly 80% of the milk proteins. These differences in proportions relate to different developmental needs of human and cow newborns. Whey proteins are easier to digest, and as a result, provide a more rapid source of amino acids. In contrast, the unique structure of casein proteins—called the casein micelle—makes them harder to break apart and requires a longer digestion time.

Both whey and casein proteins provide mammal infants with the amino acids needed for growth and development. But casein micelles provide something else important for growth: calcium and phosphorus. The unique packaging of proteins and minerals is only accomplished by cells in the mammary gland and allows for these nutritious molecules to be suspended in liquid (milk is, after all, mostly water) as if they were soluble (even though, technically, they are not).

Casein micelles contain two types of casein proteins, calcium-sensitive (which includes the three subtypes αs1-, αs2-, and β- caseins) and calcium-insensitive (κ-casein only). The three calcium-sensitive caseins are responsible for binding the calcium and phosphorus, whereas the κ-casein is responsible for stabilizing the structure [1]. When these protein-mineral spheres reach the digestive tract, specific digestive enzymes snip away the κ-casein, turning the once soluble micelle into an insoluble curd. This may sound like a bad thing, but in fact, it is of great benefit to all milk consumers because it keeps you feeling fuller longer, and gradually releases nutrients into the bloodstream. What was once liquid is now a solid, requiring more digestion effort and time.

But the time and effort the infant puts into digesting casein curds are worth it—the micelle structure of caseins allows the concentration of calcium and phosphorus in milk to exceed what would be possible if these minerals were delivered on their own [1]. All mammalian newborns and infants have high calcium and phosphorus requirements, as these minerals are essential for skeletal growth. But the requirements for these minerals are particularly high in the oldest lineages of mammals—monotremes (egg-laying mammals) and marsupials (mammals with a pouch)—which give birth to extremely immature offspring. To say that caseins are responsible for the success of the mammalian lineage is not an overstatement. Casein protein’s ability to bind calcium and phosphorous, while simultaneously delivering high-quality protein to the neonate and infant, allowed the earliest mammals to successfully reproduce immature offspring in a variety of environments [2,3].

The genes that provide the instructions for assembling calcium-sensitive and calcium-insensitive casein proteins are unique to mammals and are found in all living mammals [2]. Investigations of the casein protein genetic family tree suggest they are most closely related to genes responsible for mineralization in teeth and bones in vertebrates [2]; apparently caseins have always had an affinity for calcium and phosphorus.

Although all mammal genomes have the instructions to make αs1-, αs2-, β-, and κ-caseins, the language of those instructions (the A, C, T, and Gs of the DNA code) differ greatly across and within species [2–4]. Indeed, in a comparison of milk genes among distantly related mammals (e.g., platypus, opossum, cow, and human), casein protein genes were the most divergent of the milk proteins [4]. Rijnkels [3] reports that differences across species in the amino acid sequences of the αs1- and αs2-caseins are primarily due to shuffling of the coding portions of the genes, known as exons. In contrast, β-casein variation is primarily the result of point mutations, a change in just one letter of the DNA code [3].

Changing the words around in an instruction manual is unlikely to result in making a working final product. In the same way, changing around amino acids in the coding portion of a gene usually changes the protein’s function. Such is the case with sickle cell hemoglobin—one letter change in one amino acid in one of the four protein chains that make up the hemoglobin protein produces sickle-shaped red blood cells, which are functionally inferior to their round hemoglobin ancestors in transporting oxygen throughout the body. How can casein protein genes have rearrangements of coding portions or changes in the amino acid sequence without having major functional changes?

The reason may be related to the shape of casein proteins. Many proteins are coiled up tightly, like little balls of yarns. The amino acids that make up the protein chain are either positively or negatively charged, and thus as they coil up they react with one another and alter the shape of the protein. Casein proteins, however, are described as having a more open (or unfolded) shape, with more space between the different amino acids. Thus, mutations that change the amino acids in an open protein are less likely to change the shape, and thus the function, of the protein. As a result, casein proteins can handle frequent mutations better than other types of proteins. They are highly divergent because they can be; caseins are not under the same constraints as other proteins [3].

Much Ado about A2

Most consumers may be aware that their milk contains whey and casein proteins, but they could probably not tell you a specific type of cow milk casein protein. That may be about to change for U.S. consumers, however, as A2 milk is becoming more prevalent in local grocery stores. A2 refers to a genetic variant of cow milk β-casein, and it is believed to be the ancestral type of β-casein. A point mutation (a C was changed to an A) resulted in the A1 gene variant over 8000 years ago [5]. It is believed this mutation occurred in European herds, as cows of European descent produce both the A1 and A2 β-casein proteins, but cows native to Asia and Africa have only the A2 allele [5].

A2 milk contains only A2 β-casein proteins, whereas regular (or conventional) milk contains some A1 β-casein, where some is the operative word. Most milk found in the U.S., Canada, and Europe actually contains a combination of A1 and A2 β-casein proteins. The genes for these proteins are considered co-dominant, meaning that A1/A2 cows produce both protein types in milk. If a herd has mostly A2 genes, the milk they produce could contain only a small amount of A1 milk; a predominantly A1 herd will produce quite different milk. Thus, regular milk could be mostly A2, mostly A1, or somewhere in between.

Talking about only A1 and A2 makes it seem like there are only two types of cow β-casein protein, but there are actually 13 [6]. A2 and A1 are genetic variants but are also used to represent “types” of β-casein proteins. This makes it easier to talk about cow milk proteins but masks the diversity of caseins across and within breeds. The eight β-casein proteins grouped under A2 share the same amino acid at position 67 (proline), whereas the five grouped under A1 have histidine at position 67. This difference in amino acid is relevant to the way the proteins are digested. Digestive enzymes cut the A1 β-casein types at position 67, producing a seven amino acid-long peptide called β-casomorphin 7 (BCM-7). Because proline forms a strong bond with its neighboring amino acids, A2 β-casein types stay intact at position 67 and do not produce BCM-7.

The production of a seven amino acid-long chain seems somewhat inconsequential when considering all the ingredients passed along in milk, but there are claims that BCM-7 may cause digestive issues in some consumers. Currently, there is little scientific support for digestive differences between milks containing some A1 proteins and those containing only A2. On the other hand, both types of β-casein are associated with well-established health benefits derived from their essential amino acids, calcium, and phosphorus.