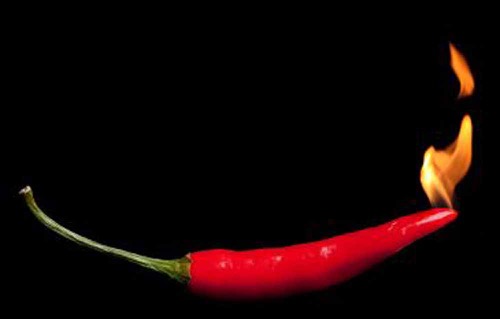 Hot chili peppers have been grown as a domestic crop in some parts of South America for between 5,000 and 7,000 years. Today, they can be found in almost every corner of the world. But their biology—and how it interacts with our biology—can still be a source of surprises. Few people realize, for example, that chili fruits are actually berries, and that the substance that makes them hot, capsaicin, isn’t present in the seeds at all but is concentrated in the white pithy part [1]. Recently, Mexican researchers investigating a local hot sauce reported another surprise: that the palate-relieving properties of ice cream and milk beat those of olive oil [2]. Initially, this didn’t make sense, given capsaicin’s chemistry. 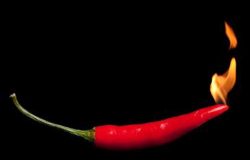 When you put hot sauce in your mouth, the capsaicin in the sauce binds a kind of receptor that surrounds your taste buds called transient receptor potential vanilloid-1 (TRPV1) [3]. Capsaicin is able to form a temporary bond with TRPV1 receptors because it is a nonpolar molecule—in other words, because positive and negative charge is spread evenly over its chemical structure. This temporary bond causes part of a TRPV1 receptor to separate, allowing calcium ions to flood into the sensory neuron to which it is connected. That’s why your brain gets the message you just ate hot sauce.

Stopping the message requires releasing capsaicin from TRPV1 receptors, such that the part of the receptors that was separated falls back into place, stopping more calcium ions from entering sensory neurons. Basic chemistry suggests that other nonpolar molecules are needed for that task. Fats are nonpolar molecules, but water is strongly polar. So, for this reason, Mónica Avendaño-Rodríguez and her colleagues from the Monterrey Institute of Technology and Higher Education, in Cuernavaca, Mexico, began their investigations into hot sauce by positing that the more fat and the less water a foodstuff contains, the better it will be at relieving hot sauce-induced burning sensations. Milk contains a little fat and a lot of water. Thus a pure fat like olive oil should be better at removing capsaicin from TRPV1 receptors.

The team’s experiment had two parts. First, they had to evaluate the spice-tolerance of the study participants. Spice tolerance is not merely related to experience eating spicy food but also how many TRPV1 receptors you happen to have been born with. Over five days of repeated testing, the courageous volunteers were asked to rate the spiciness of their local hot sauce on a scale from 0 (not hot) to 10 (extremely hot). This enabled Avendaño-Rodríguez and her team to separate the volunteers into three groups of low, medium and high tolerance.

The second part of the experiment tested the effectiveness of different foodstuffs at cooling the burn. Again, the participants showed up for five days in a row, each time receiving a portion of hot sauce. This time they rated the sensation of hotness that they experienced after consuming a second item—one of either olive oil, water, milk, ice cream or a soft drink. Over the course of five days, every participant tested the cooling abilities of all of these liquids. The sequence of the cooling liquids was also randomized, to account for participants potentially building up a tolerance to the hot sauce during the experiment.

The surprise came at the end of this second test: no matter the participants’ original spice-tolerance level, ice cream and milk always outperformed olive oil at cooling their mouths. In fact, olive oil provided no more spice-relief than water. The soft drink consistently performed worst.

Why might dairy have beaten a pure fat? One answer points to a fault with the experimental design. While the courageous participants had mentally prepared themselves to eat hot sauce, they weren’t, for some reason, willing to consume more than a tablespoon (15 ml) of oil—while they merrily guzzled 100 ml of milk and ice cream.

A second answer points to chemistry. Although olive oil might be good at removing capsaicin from TRPV1 receptors, it probably isn’t good at getting to all of the mouth’s TRPV1 receptors. This is because it doesn’t mix well with watery saliva; instead, it forms large blobs that probably hit only patches of TRPV1 receptors as a taster swallows it. But dairy products are emulsions: they consist of microscopic globules of fat floating around in water. Therefore, when mixed with saliva, milky products have nonpolar parts that are able to move freely into all of the tiny crevasses of the mouth. This might be why milk and ice cream appear to have ripped more of the capsaicin delivered in Mexican hot sauce away from TRPV1 receptors than did the olive oil.

This study offers advice for lovers of spicy food, even if they aren’t particularly partial to Mexican cuisine. Capsaicin isn’t just what makes Mexican food hot. It is found in paprika—traditionally, a spice typical of Hungary [4]—and packs the heat into many Thai delicacies like tom yum soup. When these other cuisines have undergone tests similar to the one carried out by Avendaño-Rodríguez and her team, milk has consistently been shown to be a highly effective oral fire retardant [5]. So next time you head out for a hot Indian curry, remember to ignore the water and sip mango lassi instead.