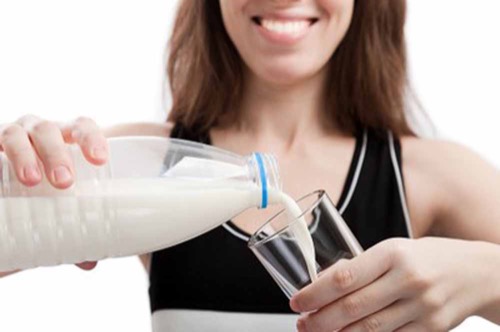 Working out means losing liquid, for some of us more than others. The lost liquid needs to be replaced, particularly if you intend to exercise more on the same day. A whole industry has been built around creating sports drinks to rehydrate athletes—and those of us who can only dream of becoming athletes—quickly and effectively. But for all these branded drinks’ isotonic technicalities, hyperactive coloring, and celebrity sponsorship deals, they tend to come second on rehydration tests behind humble, old milk.

There are various reasons why this is the case, starting with the basic fact that milk, too, has an electrolyte content equal (or isotonic) to that of the body and roughly the same concentration of carbs as commercial sports drinks. Beyond that, to understand what’s going on first requires understanding how the body responds to strenuous exercise.

To be sure, people sweat to keep cool. But sweating isn’t the only reason we are dehydrated after a work out. Intense exercise creates various metabolic waste products, which can only be eliminated in urine. So even when you are quite severely dehydrated after sport, you will need to pee not long into your recovery period. What’s more, if in your hurry to rehydrate you drink a lot of water—or another liquid with little solute content—the temporary increase in your blood serum’s volume, and concurrent decrease in its osmotic pressure, will trigger excessive urine production. Cue all that marketing about engineered isotonic goodness.

The idea, in short, is to take on board liquid that stays on board. And because of the need to expel metabolic refuse molecules, the evidence suggests that to truly replace all the liquid that is lost through exercise, you need to imbibe a volume of drink equal to about 150% of the body mass that you lost through sweating.

This rule of thumb explains the experimental set up of studies that compare milk’s rehydrating capabilities to those of Gatorade and other branded sports drinks. Typically, a group of young and fit volunteers are told to follow a list of behavioral procedures to ensure they arrive at each of the tests, which are usually scheduled a week apart, in the same physiological state on every occasion. On the test days, the volunteers exercise so hard and for so long that they sweat off a percent or two of their body mass. Then they drink 150% of that amount of one of the test liquids—they drink Gatorade on one of the days, chocolate milk another, water on the third test day, and so on. After three or fours hours of rest, the volunteers are often put through their paces again, and closely monitored. If they haven’t rehydrated reasonably well after the first bout of physical activity, it should show in their performance.

The downside of these experiments is that they tend to have small sample sizes, which is unsurprising, perhaps, given the nature of the tasks required of them. Nonetheless, the results are similar across the board.

For example, Karp et al. (2006) studied trained endurance cyclists, pushing them to exhaustion during the second exercise period. These poor souls maintained 70% of VO2 max—that is, 70% of their peak aerobic capacity– until they wilted. This happened after a significantly longer period (40 minutes) when they consumed low-fat chocolate milk during the recovery period that followed their first exercise session, than when they drank Gatorade (27 minutes).

Shirreffs et al. (2007) tried to improve on low-fat milk’s rehydration capabilities by dissolving salt in it. Her team recorded their volunteers’ urine output in the five hours after exercise. Following an hour or two of recovery, urine production rose when the volunteers drank water or a sports drink (Powerade), leaving them dehydrated despite swallowing the prescribed 150% of the volume they lost through exercise. But when they drank milk, or salty milk, there was no change in their urine production over time, and the volunteers ended up with a net positive fluid balance. The extra salt helped a bit, but wasn’t as palatable.

James et al. have instead explored the role of protein in recovery drinks. In an experiment in 2011, they tested not milk per se, but a solution of milk protein and carbohydrate that had exactly the same energy and electrolyte content as a carbohydrate solution. The protein-carbohydrate mixture did a better job at rehydrating the volunteers.

What do these results suggests about the mechanisms at play? One simple idea is that milk – and protein solutions – spend longer in the stomach than sugary drinks do, and so the associated water content enters the blood more slowly. This could avert the diuretic effect that a transient fall in blood osmotic pressure causes. Some data collected by Calbet & Maclean (1997) suggests it takes about 14% longer for half of one of the milk drinks in the above experiments to leave the stomach than for half of one of the sports drinks.

More elaborate ideas have been proposed. Exercise depletes muscle glycogen. Karp et al. reckon the cyclists in their study did not have sufficient recovery time to digest the more complex sugars in Gatorade (which include maltodextrin, a long sugar derived from starch), but did have time to break down the sugars in chocolate milk (the monosaccharides glucose and fructose, and the disaccharide, lactose). This, they say, led to more limited glycogen replenishment in the Gatorade trial. They also think chocolate milk may have delayed glycogen depletion during the second cycling session, allowing the cyclists to hang on for longer because, unlike Gatorade, the milk supplied free fatty acids to the cyclists’ bloodstreams.

Milk’s protein content has a more contentious role in rehydration than its sugar and salt components. Ingesting protein during the couple of hours after exercise is considered by some nutritionists to quicken glycogen synthesis, while others think the data on this is equivocal. There is also data supporting the idea that milk, when used a sports recovery drink, helps with muscle protein synthesis—which makes sense, given that milk contains all nine essential amino acids. Theoretically, this should reduce injury.

What this field really needs are longer data sets in which milk is used day in, day out during athletic training. One study involving soccer players by Gibson et al. (2010) did follow its subjects for a week—and indeed reported less muscle damage among those who drank milk compared to those who stuck to a traditional carbs-only sports drink. But there was no difference in the players’ performance, and one week and one soccer team doesn’t really do the research question justice.

So here’s a challenge for any enterprising sports coaches out there: test milk’s capacity to rehydrate your teams on a daily basis for a whole season. You are likely to see fewer injuries, plus better performances on the hottest days and in the longest, most unforgiving matches when winning comes right down to the wire. Plus, milk’s probably cheaper than whatever hyperactively colored drink you’re currently using.