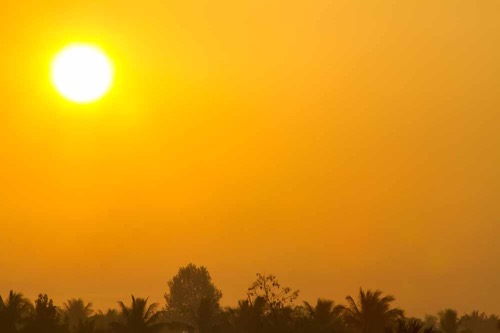 A concern facing dairy farmers as the long, hot days of summer approach is the threat of heat stress in their cows. Experienced at temperatures above 80°F, heat stress affects growth and development as well as milk composition and volume [1]. Heat stress is a major cause of low fertility in dairy cattle [2]. It also increases susceptibility to metabolic disorders, mammary gland pathogens and mastitis. Compared with other livestock, cattle are unable to dissipate their heat load efficiently [3]. Additional heat generated by the fermentation of food in the rumen compounds this problem. Cows’ sweating response is not highly effective, and the animals rely on respiration to cool themselves. Because of their inefficient response, cattle accumulate a heat load during the day that must be dissipated in cooler nighttime temperatures. In extreme weather conditions with overnight temperatures above 70°F, however, this doesn’t happen. Cattle experiencing increasing heat stress will stop feeding and become restless. They will then begin drooling and breathing more rapidly and with increased effort. They will also begin to group together, further exacerbating the problem. If not controlled, severe cases of heat stress will result in death. Economically, decreased milk yield and reproductive losses through hot summer months seriously affect the dairy industry. Increased occurrences of extreme weather conditions caused by ongoing global warming will only worsen these losses.

At the cellular level, heat stress elicits a complex molecular response. Environmental stressors cause changes in the expression—that is, the translation from DNA to protein—of various genes. These are up- or down-regulated, creating more or less, respectively, of their corresponding proteins, and thereby changing their effect. In recent years, microRNAs (miRNAs) have come to be recognized as important modifiers of gene expression levels related to a wide array of biological processes [4,5]. MiRNAs are small, noncoding RNA molecules, typically 21–25 nucleotides in length, that are widespread in the plant and animal kingdoms. First described in 1993, they function by pairing with the messenger RNAs (mRNAs) that are the intermediaries between DNA and protein assembly, preventing their translation into proteins. More miRNA means less of the corresponding protein. Every miRNA has one or more target genes whose expression it affects. Changes in the levels of key miRNAs have previously been identified as part of the response to heat stress in cattle. For example, a decrease in one miRNA, called miR-181a, reduced heat stress damage in certain blood cells of Holstein cows [6].

A recent paper by Li et al. in BMC Genomics compares the miRNA profiles of mammary glands of heat-stressed lactating cows with those that aren’t heat stressed [7]. The goal of the research is to better our understanding of how heat stress affects milk production by identifying miRNAs that may be involved in that process. The authors collected samples from eight mammary gland tissues of four lactating Holstein cows, first in spring, while temperatures ranged from 59°F to 68°F, and then in summer, when temperatures sat between 86°F and 100°F. These were defined as the non-heat-stressed (NHS) and heat-stressed (HS) groups, respectively. A temperature humidity index above 72 and cows with a rectal temperature above 102°F were considered to be indicators of heat stress.

The researchers used a technique called RNA-Seq to sequence purified miRNA samples from each group of cows. They then compared the expression levels of individual miRNAs from cows under heat stress with the non-stressed controls. The idea here is that genes that are differently expressed between the groups have a greater chance of being involved in the physiological processes related to heat stress. The authors used bioinformatic software to predict the target genes of miRNAs with high or varying abundance between the two experimental groups. Because a great deal of data have been accumulated over time on the functions of various genes, by using comparative methods, researchers are able to identify target genes and extrapolate on their functions without having to test them experimentally.

The authors looked closely at seven miRNAs that changed significantly in their abundance under heat stress, and eight that were the most highly abundant overall. Bioinformatic methods predicted a large number of possible target genes for these miRNAs belonging to a number of broad functional groups and chemical pathways. Several of these chemical pathways are known to play an essential role in the normal development of the mammary gland. Taken together, the results suggest that the key miRNAs identified in this study might act as a dominant regulator during heat stress.

Though the study didn’t attempt to determine the exact functions of the miRNAs involved, several studies have previously done so with some of the relevant miRNAs. Of these, three were found to promote the creation and/or development of fat cells, which is part of the early lactation response [8-11]. Another contributes to the creation of mammary stem cells as well as fat cells [12]. A fifth is involved in immune function related to mastitis [13]. Overall, several of the most highly abundant miRNAs in the mammary gland appear to be related to mammary gland structure, milk synthesis, and the lactation process.

The experimental setup used to test the cows in this study is of concern, however, because the authors, who were unavailable for comment, seem to have used the same four cows in both spring and summer, meaning they were at different lactational stages for the two samples. Dr. Monique Rijnkels, an assistant professor in the College of Veterinary Medicine & Biomedical Sciences at Texas A&M University, who was not involved in the study, says “It is not clear at all how long the animals had been lactating and if all cows were lactating the same length of time at sampling,” noting that the length of time between samples “could already be the cause of the changes observed, regardless of heat stress.”

Although this research doesn’t begin to solve the problem of heat stress in dairy cows, it has produced some basic data to help direct future studies. The authors note that direct experimentation in vitro will be needed to confirm both the structure and functions of the miRNAs identified by this study. Eventually, they hope these results may prove valuable for developing miRNA-based biomarkers for the control of heat stress in cows. More speculatively, genetic engineering to adjust miRNA activity may one day help reduce heat stress damage in dairy cows.