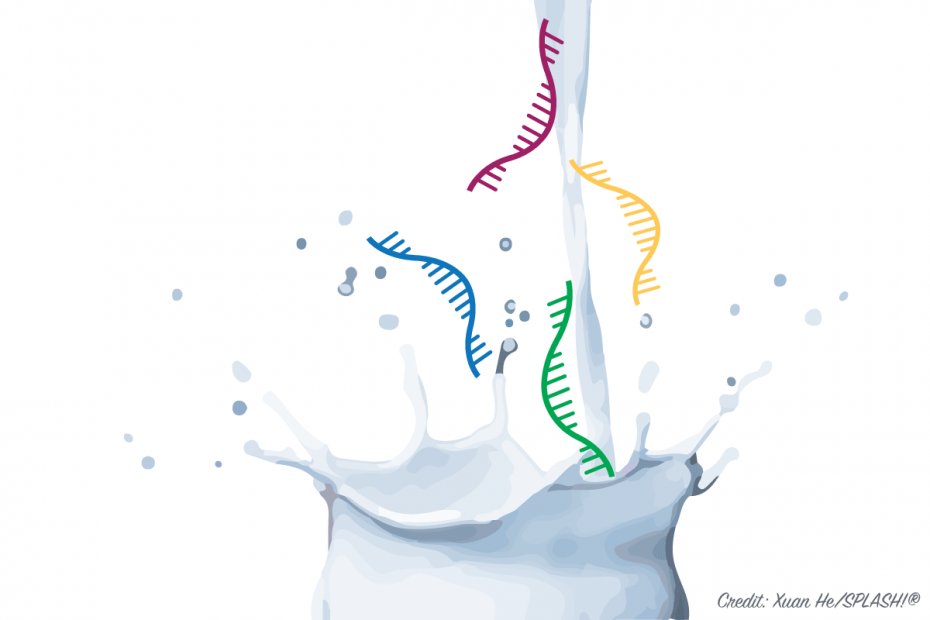 It is nearly thirty years since the discovery of the first microRNA. These non-protein encoding sections of RNA, typically in the region of 20 nucleotides long, are now understood to have important roles in gene regulation. And yet scientists are far from clear on how and when they work exactly, and novel assessments of which are involved in key biological tasks still breaking fresh ground. A recent sweep of the microRNAs found in breastmilk is one such study. In this case, an international team of researchers surveyed the most consistently occurring microRNAs appearing in breastmilk produced 3, 60 and 90 days after a full-term birth [1].

The team behind this study had plenty of reasons to anticipate that they might uncover something interesting. For one thing, other researchers had already shown that breastmilk, like many body fluids, is rich in microRNAs (or miRNAs, for short), but breastmilk is unusually so [1]. Moreover, studies that have treated sedentary mice with merely the vesicle-encased miRNAs of physically active mice have reported that the sedentary mice started to gain some of the benefits of exercise. Despite continuing to not move around much, the mice improved their glucose tolerance [2]. This finding may have little to do with the regulation or effects of mammalian milk, but it does demonstrate the regulatory power of miRNAs.

Most of the time, miRNAs operate by interfering with messenger RNA (mRNA) [3]. This is the kind of long, single-stranded RNA that carries information stored in DNA code out of the nucleus for protein synthesis, known as “translation.” In many instances, miRNAs have been reported to interact with a particular end (the 3’ end) of a target mRNA in such a way as to suppress its expression, and in the process of controlling the rate of translation, they have been found to shuttle between subcellular compartments [4]. Yet miRNAs have many more modes of action. For example, they are known to affect transcription (the production of mRNAs inside the nucleus) as well as translation, by interacting with gene promotor regions [3]. Such is the extent of miRNA activity that they are believed, collectively, to exert control over more than 80% of the protein-coding genome [1].

In the new study, the authors began by recruiting pregnant women who regularly visited a medical center in the city of Lyon, France, and who were happy to provide milk samples after they were to give birth. Providing milk for the study required following standardized procedures, such as pumping from the same breast at about 11 AM in the morning and each time emptying the other breast manually. Then, from the group of women who supplied milk, the researchers randomly selected 44 individuals. The milk samples from these women were then frozen and sent to a research center in Lausanne, Switzerland, where the miRNAs in the milk could be profiled using a special machine, and via further treatments, their relative levels could be assessed. The members of the research team in Switzerland also transfected cells in culture with some of the miRNAs that were prominently present in breastmilk to seek clues as to their functions.

In all, the study found over 2,000 miRNAs present in breastmilk. Of these, 685 were commonly identified at all three time points across the longitudinal sampling, and 35 of them were particularly common and expressed at similar levels over time. Eleven of the 685 miRNAs showed interesting variation in their levels over the three time points. Even though the types and levels of different miRNAs have been measured longitudinally in other mammals, including rats, marsupials and cows, this study is the first to assess miRNAs in human milk over different time points in lactation [1].

As their investigations continued, the team decided to focus extra effort on the activities of two miRNAs—miR-3126 and miR-3184—which both showed stage-specific upregulation. Having transfected the culture cells with these miRNAs, they then looked for changes in the cells’ gene expression. Among the 41 upregulated genes in the transfected cells, the team identified, among the common target genes, glyoxalase 1 (which among other things induces apoptosis, or “cell suicide”) and insulin-like growth factor 2 (a member of a signalling pathway that regulates cell growth and differentiation during embryonic and postnatal development). These insights led the researchers to hypothesize about the roles that these miRNAs might have, such as their possible involvement in breast gland malignancies and in the maturation of the infant gut.

To be sure, the evidence of these possible effects on both mom and infant is speculative. But it is intriguing to imagine that the investigation of miRNAs in breast milk could, over time, add more detail to our understanding of the mechanisms by which breastmilk confers so many benefits to infants who consume it. As is true with any area of research, more studies are needed. In this area, however, it is especially so.