Mercury in the Amazon, and Lysozyme C 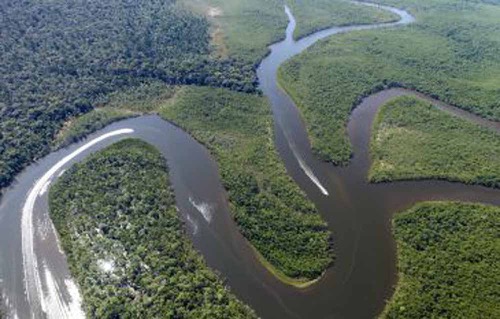 Mercury can accumulate in the bodies of animals, humans included. When it does, it has been known to have harmful effects. But for remote communities living where mercury has occurred naturally at high levels for thousands of years, responding to new knowledge about the chemical is far from simple. Recently, researchers from several city-based universities in Brazil travelled to small settlements along the Amazon River’s largest tributary to measure levels of mercury in women’s breast milk [1]. This research is noteworthy because it has identified the enzyme in breast milk that mercury can become associated with—which is a first step to understanding how to remove it.

The Amazon region has been known to have high levels of mercury in many of its watercourses for decades. Responsibility for this has been laid squarely at the feet of gold miners, who have used and continue to use mercury to extract gold from soils. But while gold mining has certainly accentuated the problem, the region appears to be naturally high in the element, says study author Bruna Cavecci of São Paulo State University, “The rock formations of the Andes have mercury, so it is not only human action.”

Other activities, such as the construction of hydroelectric power plants, have also been thought to influence local mercury levels by disrupting river sediment and creating the conditions for chemical change. Upstream of many reservoirs, the mercury in sediments and plankton tends to be in its inorganic form, but the concentration of the organic form often increases over time in the deep water parts of reservoirs near to dam walls. Both forms are considered toxic, but this matters because it is the organic form of mercury, often taken in by eating fish, that is more easily absorbed by the human body, where it can accumulate over time.

Cavecci and her colleagues chose the Madeira River for their study in part because a hydroelectric complex along its course has led to concerns about local organic mercury levels. The first phase of their research involved travelling to six communities situated along the river’s edge, from which the researchers took hair samples from the nape of the necks of lactating women who had lived in the community for at least a year and reported eating fish often [1]. These hair samples allowed the team to create a rough map of the relative mercury exposures of the six communities. Returning to the communities with the highest exposure, the researchers then asked to take samples of breast milk from individuals whose hair had registered a significant mercury concentration.

Back in the lab, it soon became clear that 4 of the 18 women’s breast milk samples had mercury concentrations higher than the World Health Organization’s reference standard of 6.0 mg per kg. The maximum found was 9.9 mg per kg, which was in breast milk from a woman in the community of Fortaleza do Abunã. The second-highest concentration found also came from a woman in that community. Cavecci noted that the geographic pattern of mercury levels in the communities did not appear to implicate the hydroelectric facility; Fortaleza do Abunã is, in fact, upstream of the dam.

But Cavecci and her colleagues wanted to know more than the concentration of mercury in breast milk. They were interested in the biochemical details of how mercury came to be incorporated into it, and therefore, exactly how infants and young children consuming the milk might be exposed. So they set about a two-step chemical analysis of the milk sample that contained the highest mercury level.

First, the investigators separated the constituent proteins in the breast milk sample using a technique called gel electrophoresis. Then they looked for big and heavy atoms associated with each kind of protein, using a machine called an atomic fluorescence spectrometer. This analysis showed that most of the mercury in the breast milk—87% of it—was bound up with just one protein, the enzyme lysozyme C, and that one mercury atom was chemically associated with each molecule of the protein.

This kind of knowledge has the potential to help exposed communities. Simply replacing breast milk with formula comes with potential health costs to infants and young children because they miss out on many of breast milk’s health-giving ingredients, which even the best formulas lack. Some of these, such as oligosaccharides that help good bacteria to flourish in the gut and also help fight viruses, are especially important in environments with questionable hygiene.

In the short term, at least, communities along the Madeira that have high levels of mercury are lucky to be situated in the country that has probably the most extensive national breast milk banking system in the world [2]. Using donor milk could be an alternative to breastfeeding for some women because there is one such milk bank in the state capital of Porto Velho, four hours’ drive from Fortaleza do Abunã. Another option would be for new mothers to avoid eating fish that eat other fish, which are more likely to contain high levels of mercury.

However, knowing that mercury is almost entirely bound to one kind of protein also suggests how to target new methods to remove it from breast milk. “The binding of mercury to lysozyme C causes deactivation of [the enzyme’s] bactericidal effect, but there are other proteins that protect the baby who breastfeeds,” says Cavecci. In other words, removing lysozyme C from breast milk should, in theory, result in milk that is almost as effective as the original at helping infants fend off germs in the first few months of life. That is a significant advance—and Cavecci says that her group is due to have more studies published soon.