In Memoriam: Legacy Lives On 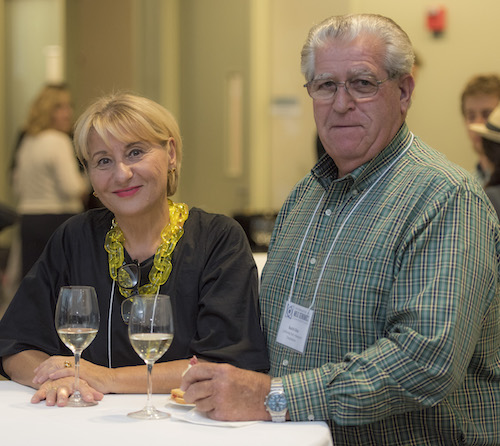 In boxing, a one-two punch is a combination of two blows delivered in rapid succession. The milk community has recently suffered a one-two punch with the loss of Gregory “Butch” Dias, Jr., California dairy farmer and chairman of the board of the California Dairy Research Foundation (CDRF) in December, and of Dr. Gonca Pasin the Executive Director of CDRF this month.

To those who may not know, Gonca via CDRF has been the primary funder of our newsletter, “SPLASH!® milk science update,” since its inception in 2012. With her financial and spiritual support, we have published more than 280 articles on topics in milk science for the lay public. Year after year, her commitment to exceptionalism pushed us to be our best.

SPLASH!® is the official newsletter of the International Milk Genomics Consortium (IMGC). The IMGC was established 15 years ago jointly between academic and dairy centers around the world with a broad mission to advance the scientific understanding of milk and lactation. Gonca and Butch were two of the IMGC’s most active and vocal supporters. Both Gonca and Butch saw a bold role for IMGC and a means to stand apart from the rest of the dairy programs. Their dedication has been instrumental in the singular success of IMGC, and while they were unheralded while doing it, their loss will be deeply felt.

One of Gonca’s visions for CDRF was for a world-wide surveillance system that could keep the industry apprised of the latest breakthroughs in all of the scientific disciplines related to milk. This is a daunting task to contemplate much less execute. Gonca saw IMGC’s SPLASH! as an unprecedented opportunity to position milk in the center of the debate on health research and simultaneously keep the dairy industry strategically alerted to all opportunities. Gonca supported SPLASH! to become a world class, academically-independent entity dedicated to the unbiased evaluation and communication of all scientific advances related to milk. Gonca was conspicuously courageous in supporting SPLASH!, not as the means to speak for the dairy industry but as the means to accelerate the progress of milk science and human health globally.

The hallmark of a great host is someone who makes everyone feel welcome, who encourages conversation and open access to all opinions, and who makes work fun and every meeting an occasion. Gonca Pasin and Butch Dias have been the hosts of the IMGC. While we will miss them, they have established a program and a momentum that will keep their vision and enthusiasm alive and well as a living legacy.