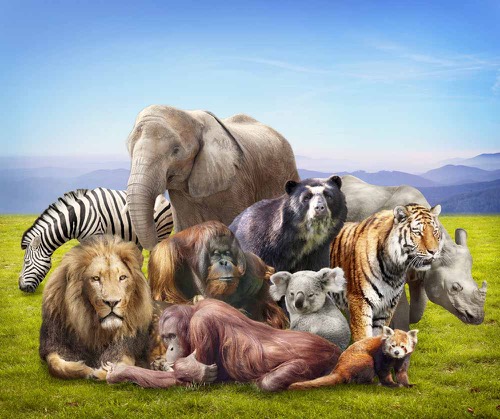 Fifty years ago Devorah Ben Shaul published the seminal paper “The Composition of the Milk of Wild Animals” (1963). She had spent ten years aggregating published papers of milk composition as well as directly analyzing dozens of species’ milks. Eyeballing the data from 101 species, Ben Shaul posited that the composition of milks–the percent fat, protein, and sugar–did not necessarily cluster by the evolutionary history of taxonomic groups (a.k.a. phylogeny). She noted that “grizzly bear milk and kangaroo milk had virtually the same basic milk composition” (p. 333). Therefore, Ben Shaul approached milk from the perspective of environment and nursing behavior. She posited that milks clustered in relation to the degree of maturity at birth, maternal attentiveness and nursing frequency, and the exposure to water and ambient temperature. Mammals that park their infants and forage for extended periods of time, such as the echidna, rabbit, and lion, produce milk with high fat content to sustain infants until the next nursing bout. High fat milk also is typical in many seals and sea lions in cold, aquatic environments because the pup’s thermoregulatory needs are high, as is the need to develop a fat blubber layer. Species produced more dilute milk when young were “precocial,” born at a relative mature condition, like ungulates, with eyes open, able to follow their mother on foraging trips from an early age, and with frequent access to suckling.

In subsequent decades, as more data both across and within species became available, two more very large reviews of milk composition were helmed by Olav Oftedal. He further considered milk composition through the lens of behavior and environment, as well as phylogeny (Oftedal, 1984; Oftedal & Iverson, 1995). Although milk composition was more likely to be similar among closely related species, behavioral care, environment, and other traits like body mass, also seemingly influenced milk synthesis. However, systematic statistical techniques for rigorously detecting “signatures” of phylogeny, environment, and behavior in milk composition across mammals remained absent from the literature.

Skibiel et al. (2013) used two different statistical approaches: one that did not account for phylogeny (ordinary least squares regression) and one that did (phylogenetic generalized least squares regression and regression with an Ornstein-Uhlenbeck transformation). Yeah, at first it seemed like gibberish to me, too. Basically, traditional regression models operate on the assumption that all data points are independent. BUT we know that milk synthesis has a genetic component and that closely related species will have vast similarities in their genomes. For this reason, two closely related species have a high probability of sharing many genes because they share a recent common ancestor. Regression analyses that compare species without accounting for phylogeny are violating assumptions that data points are independent. As a result, comparative analyses controlling for phylogeny are becoming increasingly important for understanding how selective pressures have shaped biological traits in animal and plant species (Nunn, 2011).

Skibiel and colleagues revealed that the “phylogenetic signal” in milk is very strong. Milk composition in a very large way reflects shared ancestry from a common ancestor. However, after controlling for phylogeny, duration of lactation and diet were both significantly associated with milk composition. Species that had longer periods of lactation produced more dilute milk–protracted lactation is seemingly not physiologically compatible with synthesizing higher energy density milk. This makes sense; mothers would too quickly become depleted if milk composition was energetically dense. Diet also had a strong influence on milk composition–carnivores synthesize milk higher in fat and protein (and consequently with higher dry matter content and caloric density (kcal/g)) than vegetarians or omnivores. Maternal body mass, arid environment, reproductive output (litter size and mass), and precociality were not associated with milk gross composition in this cross-mammal analysis (Skibiel et al., 2013) despite previous studies showing an association with some of these parameters within some clades (Hinde & Milligan, 2011). Mammals in aquatic environments produced richer milk after controlling for phylogeny, but this correlation was no longer important once diet and lactation length were included in statistical models. Importantly, the present analysis only investigated milk composition, but not milk yield. Total energy output, the combination of milk energy density and milk volume, is going to be a very critical component in understanding the effects of phylogeny, environment, and behavior (Riek, 2008).

So just like theoretical physicists, we still do not have a milk “Theory of Everything” because the mega mega analysis integrating all key data remains to be done. Milk synthesis exists at the complex intersection of the other dimensions of the lactation strategy: the duration of lactation, nursing pattern, and litter size. Skibiel and colleagues admirably tackled duration of lactation and total reproductive output (a measure related to litter size). But each of these dimensions involves many untested nuances, including the fact that the period of time between birth and weaning can involve substantial changes in milk composition across time as young transition from colostrum to exclusively milk feeding, to a period of mixed milk and solids feeding (Langer, 2008; Trott et al., 2002). Patterns of nursing–the frequency and duration of nursing bouts–can complicate milk throughput in the mammary gland, affecting milk composition (Miller et al., 2013). And litter size doesn’t account for the ratio of sons and daughters in the litter despite a growing literature suggesting that infant sex may influence milk synthesis (Hinde & Milligan, 2011). How mothers “pay” the costs of lactation may also have important interactions with milk synthesis. For most mammals, synthesizing milk reflects differential reliance on “capital” (the reliance on body stores) versus “income” (dietary intake) tactics to varying degrees across species and across individuals within species, and across time within an individual (Hinde et al., 2009; Jönsson, 1997). Also, across mammals the developmental priorities of young vary among growth, development, and behavioral activity budgets, so not only should nursing behavior be considered, but how infants are assimilating and utilizing the milk they ingest from their mother (Hinde, 2013). Natural selection is acting on adaptations for milk synthesis in the mother as well as adaptations in the infant to extract and use milk from the mother.

Yeah, it’s a complex system. And for most of these parameters, reliable data are not yet available across the mammals for which we do have milk composition information, much less the thousands of other mammals whose milk composition we still haven’t analyzed. Oh, and this is just talking about gross composition—the total percent fat, protein, and sugar—and doesn’t even include description of the specific fatty and amino acids, or disaccharides and oligosaccharides, or the hundreds, possibly thousands, of other bioactive constituents in mammalian milk: hormones, minerals, immunofactors, etc. etc. etc. ad nauseum.

But even though we don’t yet have the data available for the ONE ANALYSIS TO RULE THEM ALL!, we can be more confident about the things that we think we know. Milk reflects the immediate conditions of the mother and the environment as well as the conditions experienced by ancestors in the past. Species can have milk of the same composition as a result of different selective pressures. Conversely, species living in the same environment, with the same diet and same length of lactation, may still have very different milks because they evolved from different recent ancestors. Importantly, our fearless SPLASH! editor-in-chief, Danielle and colleagues, demonstrated that the genes underlying milk synthesis change at a slower rate than does other areas of the genome (Lemay et al., 2009), further complicating our studies of the evolution of mother’s milk. Populations of a species may have recently expanded into a new environment, possibly leading to consumption of new types of food or tangling with new predators that require different vigilance and interactions with their young, all of which are likely to have important consequences for milk. In this way, milk synthesis reflects both the “here and now” AND the “there and then.”

Jönsson KI (1997) Capital and income breeding as alternative tactics of resource use in reproduction. Oikos 78:57-66.