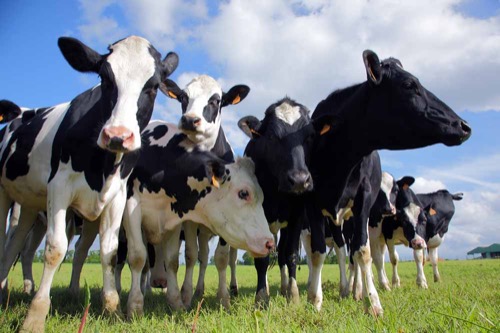 Selective breeding has been used for many centuries—initially in a crude form by early farmers, but today using highly sophisticated genome analysis and complex algorithms. However, the goals have remained the same: to improve the efficiency of dairy production. This translates into breeding the healthiest, most productive cows suitable for the appropriate farming system and environment. New technologies have provided the capability to monitor the changes that occur with selection in great detail. Two recent papers explored the most effective methods to accomplish this and investigated changes in North American Holstein [1] and South American Gyr dairy cattle [2].

Genomic Breeding Values (GBV) are now part of many national programs for dairy herd improvement. GBV predict the value of using an individual bull or cow for breeding the next generation of cattle for the farm. They are the culmination of over 10 years of intensive international dairy science research investment in cattle genetics, and build on 30 years of nationalized production trait measurements and the previous system of estimating these breeding values. Implementation of precise genomic measures as a means of selection for herd improvement has led to a rapid rise in the rate of gain in many herds. It has also meant that the impact of selecting in this way can now be modelled and evaluated in great detail.

Selective breeding programs by their nature tend to reduce genetic diversity in dairy cattle populations. A similar effect can occur in nature, for example when the number of individuals in a species is markedly reduced, but it is more common in artificial selection, especially when selection is focused on a limited number of traits [3].

The reduced diversity may not be obvious in the way cattle perform in the short term but may eventually lead to an inadvertent increase in undesired or deleterious phenotypes, or traits, reducing performance of a herd or increasing the risk of health problems.

With this in mind, scientists have begun to measure and model the changes in the genome that the increased use of selective breeding using genomic markers is having on herd genetics.

A very useful way to measure genetic diversity is by calculating the level of inbreeding in a population. This has been previously estimated from pedigree data, but with the availability of detailed data on the genomes of many cattle, there is an expectation that more accurate measurement can be made. Two recent publications consider the North American Holstein [1] and South American Gyr dairy cattle [2]. The Holstein breed is the most widely used dairy breed in North America and many other countries. Gyr cattle belong to the Bos indicus subspecies of cattle. They originated in the Asian sub-continent, and were first imported from India to Brazil early in the 20th century for mixed use but have since been selected for milk production. The Brazilian Gyr has also become a source of dairy genetics for other countries where these animals are suited to warmer climates.

The scientists participating in both studies were interested in changes to the level of inbreeding in the cattle under study. In both the studies reported, they compared methods of estimating the amount of autozygosity in the herds. Autozygosity indicates how similar the DNA is within individuals and across the herd as a result of regions of DNA originating from a common ancestor. Put simply, offspring get one copy of their DNA from their mother, and one copy from their father. Autozygosity is the measure of how similar those sets of copies are to the originals. If the DNA of both maternal and paternal origin is identical, then the offspring would be fully autozygous. There are many strains of laboratory mice, for example, that have been selected to be identical in all but their X and Y sex chromosomes, which are referred to as fully inbred. In cattle this is not a likely outcome, but there are degrees of inbreeding that can be measured as the sharing of identical stretches of DNA derived from sire or dam. The scientists were able to detect where sections of the genomes were identical using DNA sequence and molecular marker data. Technically these regions of the genome are referred to as runs of homozygosity (ROH) [4-9].

Using different ways of measuring ROH, Forutan et al. [1] were interested in how accurately they could predict autozygosity using computer simulation. They then compared these results to actual data from over 40,000 dairy cattle born over a period of 25 years. For North American Holsteins, the effect of selective breeding using molecular methods has been most pronounced in the past 5 years. The introduction of genomic estimated breeding values has accelerated the rate of genetic gain without increasing the level of inbreeding per generation. This is because the molecular data provide more precise selection and can be used to avoid increased inbreeding by selecting a wider range of bulls. The acceleration in production gains arises significantly from the fact that the process of selection using molecular methods is much faster than traditional methods, allowing bulls to be used for breeding from a younger age. However, this has the consequence of an overall increase in the level of inbreeding when examined at herd level.

In the Gyr cattle, the focus of the study was a bit different. The purpose was to determine the level of inbreeding from ROH, and to consider the consequences this may have on expanding Gyr herds being used in dairy production [2]. Peripolli and her colleagues found that the limited number of founder animals imported into Brazil had affected subsequent population structure, as may be expected. The scientists found that using the ROH method could accurately detect and describe the level of autozygosity in these cattle. They also focused on specific regions in the DNA that were affected. Selection leaves a signature in the genome where the genes controlling a trait are located and the surrounding regions that hitchhike because they are found in the same linkage block [10]. They were interested to know which genes were in those regions and what function they may have. Indeed, they found that the most prominent regions of increased ROH were those containing genes that are known to be involved in dairy production traits.

These studies emphasize the growing accuracy that genomics provides for evaluating selective breeding programs. They show that, although improvements in production can be accelerated, it is very important to monitor and manage changes to genetic diversity to ensure sustainable development of highly productive herds. Using the new tools available to measure ROH is an effective approach to achieve this goal.