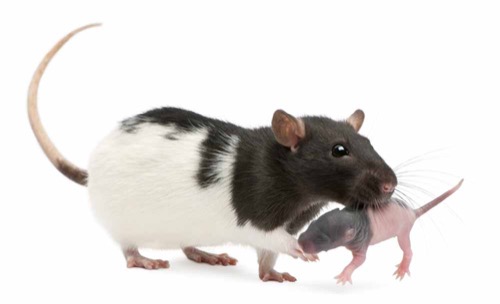 Mothers know that they are eating for two during pregnancy and lactation- but more is not always better. In a recent paper, Mendes-da-Silva and colleagues (2014) reported an experiment designed to gain an understanding of how the diet a mother consumed affected offspring development. This research was conducted in the go-to biomedical animal model- the lab rat. Most interestingly, they teased apart the effects of diet during pregnancy from those of diet during lactation by manipulating rat dams either during one status or the other. Feeding the rat mothers a high-fat diet (HFD), particularly during lactation, affected the pups’ growth, and physical and neurological development, but not in the way you would think. When more calories were consumed by the mother, pup development was actually delayed.

The negative effects of under-nutrition are well known, but Mendes-da-Silva and colleagues (2014) reveal altered development from dams that are “over-nourished.” Specifically, pups nursed by mothers consuming five times the amount of fat in the HFD as in the typical lab rat diet, weighed less than pups nursed by mothers fed a normal diet. Moreover, pups of HFD lactators were shorter in body length for nearly ALL of lactation, managing to catch up with normal pup length the last few days before weaning. In addition, they were delayed in opening their eyes, erupting their teeth and unfolding their ears by 1-2 days. Although a day is nothing to us, and a lifetime for a mayfly, it is an appreciable amount of time for a rat. Indeed, rats are pups for only 21 days before weaning, so multi-day delays are substantial.

The HFD consumed by dams also had consequences for the pups’ behavior. Maternal diet during lactation delayed the unconscious reflexes that are critical for responding to environmental stimuli. Pups suckling from HFD  mothers were delayed by 1-4 days in their abilities to right themselves “head up” after being placed on a sloping surface, respond to loud noises, twist to land on their feet after being dropped and “vibrissa placing,” which is the most boring way ever to say “whisker twitching.”

And most problematic, given that globally more people’s health is threatened by over-nutrition than under-nutrition, even though these pups were little and delayed while suckling from HFD dams, as adults they were a lot heavier.

How did this happen? Well, unfortunately, Mendes-da-Silva and colleagues (2014) did not directly investigate mammary gland morphology or the specific nutritional or hormonal composition of the milk that might explain the causes of some of these effects. Previous research by others, however, suggests that over-nutrition, like under-nutrition, is a form of malnutrition. But this form of malnutrition is an evolutionary novelty (Hinde and German 2012) that can send physiological systems haywire. Specifically to lactation, over-nutrition can cause metabolic effects that alter mammary gland biology and milk synthesis. Previously reported consequences of over-consuming fat include changes in mammary gland function, milk protein synthesis, and milk volume (reviewed by Mendes-da-Silva et al. 2014). A HFD during lactation increases time spent nursing and fat content in milk from mid to late lactation (Purcell et al. 2011, Rolls et al. 1986).

These findings are largely consistent with those of other studies. A maternal HFD changes the metabolism of young, impairing glucose tolerance and higher circulating leptin- a major regulator of appetite (Sun et al. 2012). Interestingly, unlike the recent Mendes-da-Silva et al. (2014) study in which increased weight of offspring was evident in adulthood, previous research showed that offspring weight gain and tendency toward obesity begins before weaning in both rats and marmoset monkeys (Bayol et al. 2007; Ross et al. 2003).

Mendes-da-Silva and colleagues’ paper (2014) is particularly important in several key ways. They demonstrated that maternal diet during lactation delays many milestones of rat pup development across multiple developmental domains. Furthermore, their study followed offspring into adulthood, showing that their “catch-up growth” as they approach weaning seemingly set the stage for being overweight in adulthood.  Such research should next tackle bioactive molecules in milk that account for these offspring outcomes and better unpack the metabolic pathways involved in both mother and pup.