What Makes a Good Dairy Cow? 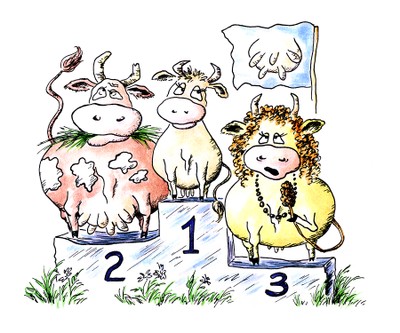 Cattle have been domesticated since the Neolithic Age, but did Stone Age farmers select their cattle? And what about the thousands of years between first domestication and the modern era, how much selection has taken place? Animal geneticists have been interested in estimating the impact of selection on cattle for many years, and since the cattle genome sequencing project was completed, they have developed new and powerful tools that have heightened this interest. In a newly published study, Utsunomiya and colleagues (1) brought together cattle genetic data from around the world to reveal those regions of the genome that light up with the hallmarks of selection.

The process of domestication probably took place more than 10,000 years ago from a founding population of fewer than 100 cattle in modern-day Turkey. We recognize two major cattle sub-species, Bos taurus and Bos indicus, suggesting that cattle were domesticated in two geographical regions. We know that cattle were then adapted for different uses, including as a source of meat and milk, and for pulling wagons and plows, and we can imagine that this gave rise to early breeding practices with some form of farmer-assisted selection. Fast forward to the modern era; breed formation has favored a few breeds of dairy cow that have been progressively selected for being the best performers, especially over the past 50 years. This process of selective breeding is written into the DNA of dairy cows.

Darwinian selection, or “survival of the fittest,” is of course a process that occurs in nature, and is the driving force of evolution. Selective breeding is similar to natural selection in genetic terms, but accelerates the process on the basis of productivity gains for dairy farmers. Just as natural selection leaves its mark on a species, so does selection for breeding purposes. In the case of dairy, intensive selection for milk traits, e.g. milk production or milk composition, means that dairy cattle have been through genetic bottlenecks to improve production. The study by Utsunomiya et al. (1) set out to look for areas of the genome that carry the tell-tale signs of selection, referred to as a “selective sweep,” by comparing dairy breeds with beef breeds, and including Bos taurus and Bos indicus breeds.

How to find a selective sweep?

The project to sequence the entire genome of cattle began in 2003–2004, and the first draft of the sequence was published in 2009. This project provided the tools to study cattle genetics in great detail and also dramatically reduced the cost. As a consequence, there are now thousands of individual cattle that have been genetically scanned, providing a wealth of data to look at the impact of selection on dairy cows (3-4).

Utsunomiya et al. (1) collated data from genome scans in a total of 855 animals. They whittled this number down to 136 animals from 4 breeds to balance the breed representation and remove closely related animals. These included Swiss Brown dairy cattle, a breed favored in Europe that originated in Switzerland up to 8,000 years ago; Angus cattle, a beef breed developed in Europe; Gyr cattle, a breed that originated in Northern India, and is used for dairy and beef production; and Nelore cattle, which are an indicus beef breed that are popular in South America. There are about 3 billion letters in the DNA of dairy cows, but these letters can be divided into genetic islands. This is how Utsunomiya and his colleagues (1) approached the problem, they divided the DNA for each animal into 500,000 pieces—still a large number! Then by comparing the DNA of all cattle in one analysis, they found those pieces that were similar within each breed and those that were common among breeds.

Their tests revealed 153 regions in Angus, 212 in Brown Swiss, 3 in Gyr, and 13 in Nelore that had the hallmarks of selection. They looked more closely at the genes in these regions, and what they found in Brown Swiss dairy cattle were genes associated with fertility and one particular enzyme. The fertility genes are linked to pregnancy and lactation hormones, so that makes sense, but what about the enzyme? The gene is called calpain, and it turns out that it may be one of the factors that can determine whether milk production is turned off by the mammary gland.

Could these regions be what distinguish a good dairy cow from a beef breed? Quite likely, but there were surprisingly few regions identified, and perhaps other breeds could add to this tally. The good news is that there is still enough diversity within the cattle genome to continue to improve production by selection (5-6).

When it comes to finding a perfect dairy cow, about 30-40% is determined by the genes passed down from its ancestors. Although genetics can be optimized by selective breeding, the rest of production improvement is up to the farmer.