Magnesium in Milk: An Overlooked Mineral? 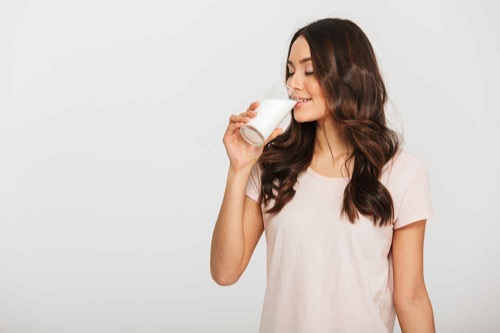 Magnesium is one of the most abundant minerals in the human body and plays a key role in many of the body’s physiological functions. Despite its availability in a wide variety of foods, magnesium is often reported as being consumed at inadequate levels [1].

A new review by H. Eustina Oh and Hilton C. Deeth suggests that “magnesium in milk and milk products is a major contributor of dietary magnesium and warrants more attention from researchers [2].”

Magnesium in milk has so far been relatively overlooked by researchers compared to calcium, possibly because it is present in cows’ milk in about 10% of the concentration of calcium. Oh and Deeth suggest that “until recently it could be termed the forgotten mineral.” However, an ever-increasing number of studies have shown that magnesium is extremely important for the body’s functioning.

Magnesium is involved in protein and nucleic acid synthesis, bone growth, energy metabolism, regulation of blood pressure, and in the activation of hundreds of enzymes [3,4]. Dietary magnesium intake can help reduce the risk of type 2 diabetes, as well reduce the rate of heart attacks and strokes [5-7].

Consuming too little magnesium has been implicated in an array of health issues, including metabolic syndrome, skeletal muscle loss, kidney function decline, and depression [8-12]. Reduced intake of dietary magnesium is also associated with elevated blood pressure and higher stroke risk, whereas magnesium supplementation has been reported to lower blood pressure in adults [8,9].

Magnesium also interacts with many other minerals and nutrients. For instance, it influences extracellular calcium levels and the intracellular actions of calcium [13]. It also plays a crucial role in immunoregulation and bone mineralization by influencing the synthesis of the active vitamin D metabolites [14-17].

Magnesium’s interactions with vitamin D are a particularly important example of the crucial role this mineral plays in the body’s functioning. A recent review by Anne Marie Uwitonze and Mohammed S. Razzaque indicates that magnesium helps vitamin D activation and function. Vitamin D needs to be converted from its inactive form to an active form before exerting its biological functions, and this process is actively dependent on the bioavailability of magnesium [14,15]. The authors conclude that it is “essential to ensure that the recommended amount of magnesium is consumed to obtain the optimal benefits of vitamin D [18].”

Vitamin D and magnesium interact to maintain the physiologic functions of various organs, and abnormal levels of either nutrient can lead to serious organ dysfunctions [19-24]. Deficiency in either nutrient is associated with various disorders, including skeletal deformities, cardiovascular diseases, and metabolic syndrome [25-30].

Razzaque hopes for more studies of the interactions between vitamin D and magnesium in the future. “We need well-designed clinical studies to show that by consuming an adequate amount of magnesium one could reduce the morbidity and mortality related to vitamin D deficiency, perhaps without taking vitamin D supplements or taking a lower dose of vitamin D supplements,” he says.

Despite the crucial physiological roles played by magnesium, more than half of the US population may be consuming inadequate amounts of this mineral [1]. Magnesium is widely present in both animal and plant foods, but the United States standard diet contains about half of the recommended daily allowance for magnesium [32,33].

Given magnesium’s various physiological functions, its interactions with other nutrients such as calcium and vitamin D, and its overall importance to human health, it is important to ensure that it is consumed in adequate amounts. The importance of magnesium in the diet and its inadequate consumption by a majority of the population have led to increased interest in finding dietary sources of magnesium and enriching such foods [34,35].

Milk and dairy products are already one of the main dietary sources of magnesium, particularly for children, contributing approximately 10–30% of the total magnesium intake [36]. Some studies have shown that the lactose in dairy products may help in the intestinal absorption of magnesium in human infants and in rats [37-39].

Milk can also be enriched with magnesium, and commercial magnesium-fortified ultra-high temperature [UHT] processing milk is already available [40]. A recent study discovered an added benefit of enriching milk with magnesium—it can help reduce bacterial contamination and spoilage, and increase the intestinal bioavailability of magnesium from milk [41].