Looks Can Be Deceiving: Similar Gut Bacteria Have Different Functions in Breast-Fed and Formula-Fed Infants 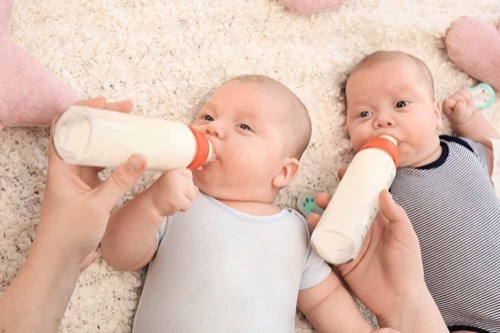 Infant formula manufacturers are faced with an extremely difficult task: they must transform cow or plant-based milks into a liquid that mimics human milk. This mimicry involves more than just copying human milk’s ingredient list, however. Formula must also match human milk in performance, an especially difficult endeavor when considering many components are highly complex and specific to human milk.

Such is the case with human milk oligosaccharides (HMOs), carbohydrates with a prebiotic function. Because of their demonstrated benefits to the development of the infant’s gut bacterial communities (or microbiome), many formulas add commercial oligosaccharides. On paper, these commercial oligosaccharides seem to be perfect stand-ins for the real thing—they are similar to HMOs in molecular structure and are known to promote the growth of breastfed-like bacterial communities. But a new study [1] demonstrates that even though the microbiomes look similar, gut bacteria from formula- and breast-fed infants follow different sets of genetic instructions.

If the goal of formula is to copy human milk ingredients, it’s no surprise that oligosaccharides top the list. They are the third most plentiful component of human milk and are highly diverse, with over 200 different varieties (that is, different structural configurations) discovered so far [2, 3]. The quantity and diversity of HMOs is unique across mammals, with cow milk containing only trace amounts and only 40% of the types found in human milk.

Ideally, formula manufacturers would just add HMOs to their products, but HMO structural complexity and sheer diversity make them extremely difficult to extract or synthesize. In lieu of the real thing, commercial oligosaccharides—specifically galacto-oligosaccharides (GOS) and fructo-oligosaccharides (FOS)— have been added to formula since that late 1990s [3,7]. These carbohydrates are not as complex as HMOs but have been found to promote the growth of bacterial microflora similar to that of breastfed infants (i.e., Bifidobacterium) [1-3, 7]. As a result, infants fed formula supplemented with GOS and FOS have microbiomes that look more similar to breast-fed infants than those fed formula without added oligosaccharides [1]. While this is undoubtedly a major breakthrough in infant nutrition [7], it appears that GOS and FOS may not be enough to fully impersonate human milk.

The real test of the ability of GOS and FOS to fill the role of HMOs in formula is to determine whether the gut bacteria in formula-fed infants are doing the same things as their colleagues in breast-fed infant guts. This requires not only identifying which types of bacteria are present in the gut, but also the types of amino acids and biomolecules, such as vitamins, those bacteria have the potential to synthesize.

A new study [1] from a team of researchers from Washington University in St Louis presents just such a functional comparison. The team tested the hypothesis that even gut microbiomes that appear similar will have drastically distinct functions based on specific components in the infant diet. The community of bacteria that lives in the infant’s gut will also appear in infant stool, allowing for a less invasive way to collect gut bacterial DNA. Genomes from 402 fecal samples representing 30 sets of twins between 0 and 8 months of age were matched with parent-provided data on diet; the sample included breast-fed infants, formula-fed infants (including those consuming formula supplemented with GOS/FOS), and infants that received both breast milk and formula.

As predicted, diet corresponded to the (potential) metabolic function of the infant’s gut microbiome. Infants that received the majority of their nutrition (>50%) from breast milk had microbiomes made up of more bacteria capable of synthesizing branched-chain amino acids, as well as the amino acids methionine, cysteine, arginine, and theorinine [1]. These amino acids are found at lower concentrations in breast milk compared with formula. Conversely, there were fewer bacteria that synthesized amino acids that are plentiful in breast milk, namely histidine and trytophan [1].

A nearly reverse pattern was identified in fecal samples from formula-fed infants; they had fewer gut bacteria with the genetic potential to make methionine, cysteine, and arginine (which formula has a lot of) and more capable of making histidine and tryptophan (which formula has very little of).

Remarkably, it appears that the genetic functions of the gut bacteria correspond to infant nutritional requirements; gut microbes pick up the slack and synthesize amino acids that are lacking in breast milk (or formula). The researchers call this milk-microbiome complementarity, and believe it is an adaptation to infant protein balance [1].

The team only measured potential function of the bacterial DNA rather than which amino acids were actually transcribed, thus this study cannot speak to the health consequences of these different metabolic pathways. However, they speculate that the genetic instructions that are more plentiful in breast-fed microbiomes may relate to the improved immune function associated with human milk. For example, arginine and cysteine (enriched only in breast-fed infant microbiomes) may be involved in preventing infection [1].

Thus, although GOS- and FOS-enriched formulas do mimic human milk in composition, they can’t claim to match it in performance. But studies like this provide critical stage notes for formula manufacturers to improve their product’s performance. Even small changes in microbiome function in early infancy can have profound impacts on individual health years (and even decades) later [4-6].