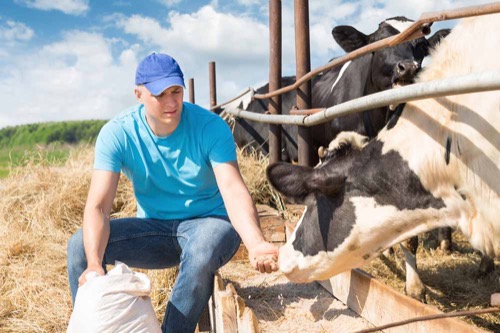 A team of scientists from four continents has gathered evidence to demonstrate that it should be possible to cut methane emissions from dairy cattle without reducing how much milk they produce nor having to change the conditions in which they are kept. The answer is simply to add an ingredient to their feed. In tests lasting several months, this ingredient, 3-nitrooxypropanol, known as 3NOP, cut methane emissions from Holstein dairy cows by about 30% [1]. Achieving such a reduction in enteric methane output across the dairy industry would be a significant contribution to wider efforts to reduce greenhouse gas emissions.

As ruminants, dairy cattle are home to bacteria that ferment their food, readying it for regurgitation as cud before proper digestion takes place. Methane gas is generated during the fermentation process and eventually makes its way into the atmosphere from either one end of the cow or the other. All of this methane—emanating from cattle all over the world—is a prime target for mitigating greenhouse gas emissions, not least because methane is a far more potent greenhouse gas than carbon dioxide. Although estimates of livestock’s contribution to anthropogenic emissions vary [2], it is widely accepted that emissions from cattle dwarf those from other kinds of livestock [3].

The authors of the recent study set out to evaluate the real-world effectiveness of a compound that they knew had the potential to cut how much methane the average dairy cow releases into the atmosphere. 3NOP was first identified by a computer model in a laboratory in Basel, Switzerland. Researchers there singled it out for further testing because after it was found to bind the active site of a methane-producing enzyme that occurs in one of the most common kinds of ruminant fermentation bacteria, Methanobrevibacter ruminantium. By binding this active site, 3NOP stops the enzyme from working and limits the bacterium’s growth (whilst leaving unaffected the growth of non-methane-producing bacteria) [4].

Testing the real-world effectiveness required 48 Holsteins. The cows were randomly assigned to either a control group, or to a group that would continually receive low, medium, or high amounts of 3NOP in its food. Many aspects of the cows’ milk production and health were closely monitored, and all of their methane, carbon dioxide and hydrogen emissions were measured regularly throughout the experiment.

Importantly, the Holsteins were kept in conditions similar to those on commercial dairy farms and monitored for a three full months—which is longer than most methane-inhibitor tests of the past. The extended period offers an insight into whether several key concerns are avoided, such as if the cows eat less over time in the condition where the compound is added to their food; if their milk production tails tailed off; and if methane-producing bacteria can shift their metabolic strategy and adapt to 3NOP. If the latter occurs, methane production may start to rise again after it dips—despite the cows continuing to gobble 3NOP in every meal.

After the three months were up, the Holsteins that ate the most 3NOP consistently emitted the least methane. Indeed, they generated 32% less methane than cows in the control group, which consumed no 3NOP but an otherwise identical diet. The trend in the data showed little sign of abating, indicating that methane-generating bacteria do not readily find a way around the methane inhibitor’s effects. The 3NOP-consuming cows produced more hydrogen, which was to be expected if the fermentation process was interrupted as the scientists foresaw (because hydrogen is an intermediate in this process). Carbon dioxide emissions did not vary, however, whatever experimental group the cows were in.

The cows’ other vital statistics were encouraging. Eating 3NOP did not curb their appetites; instead, it seems to have helped them put on weight. This is probably because the food energy normally lost as methane became metabolically available to these animals. Additional energy availability may also explain the greater milk protein and lactose yields in the 3NOP-eating cows’ milk, since it could, in part, have been plowed into synthesizing these milk constituents. Overall, the concentration of fat in milk was unaffected by a diet containing 3NOP (even though the relative abundances of particular fats did change).

While further testing is likely required on larger herds and different breeds, 3NOP does appear to generate the kind of methane mitigation that the dairy industry is under pressure to achieve, without impacting how farmers go about their business. This matters in many countries where the industry contributes a sizeable portion of total greenhouse gas emissions, such as New Zealand. But it also comes at an auspicious time in the United States because the U.S. Environmental Protection Agency’s estimates for enteric methane emissions over the country have, in the past few years, come under fire. Satellite data have suggested that the Agency underestimates these emissions by up to 85% [2]. 3NOP could help to reduce the problem.