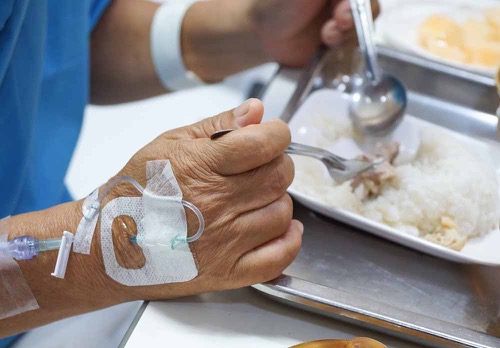 Iron is central to survival. As part of haemoglobin, it carries oxygen around the body. But excess levels have been linked to the development of cancer and to various sensory disorders [1]. When a cancer patient embarks on a course of chemotherapy, he often develops a persistent metallic taste in his mouth that is thought to be caused by iron in his saliva. Realizing this, a team of researchers from Virginia Tech decided to test whether giving chemotherapy patients a substance that mops up free iron, which is naturally present in human tears, milk, bile and saliva, might bring back the patients’ normal sense of taste [2]. Although their study is small, they report remarkable success.

The substance in question is called lactoferrin. It features frequently in SPLASH!® due its versatile anti-microbial properties, and therefore its importance in protecting newborn babies from pathogens. Lactoferrin has several means of destroying bacteria, among them sequestering free iron that bacteria need to keep growing, and using its iron-attracting capabilities in breaking up bacterial cell membranes [3]. In short, if the human body needs to mop up iron, lactoferrin is its go-to molecule.

The team at Virginia Tech had previously studied the emergence of a metallic taste in healthy people. Six years ago, Andrea Dietrich and Susan Duncan were co-authors on a paper that described having healthy participants rinse their mouths with an iron-rich solution. Once the metallic taste was established in this way, the investigators tested substances like the anti-oxidants vitamin C and E, an ion-binding molecule called EDTA (ethylene-diaminetetraacetic acid), as well as lactoferrin, to find out which was best at quenching the flavor [4]. The results clearly showed that only lactoferrin did the job completely. So the next step was obvious: to test whether it worked in cancer patients undergoing chemotherapy.

Their latest paper, published this fall, reports changes in the salivary composition and metallic taste experienced by 19 individuals with cancer, and 12 healthy subjects with normal taste perception and of similar age to the cancer patients. The cancer patients involved had diverse forms of the disease—colorectal, breast, brain, pancreatic, lymphoma and myeloma cancers—but all had found that chemotherapy threw off their sense of taste and turned it metallic. Not only did the researchers set out to measure changes in the participants’ sensory perceptions, but also to profile the minerals and proteins in each participant’s saliva before and after the lactoferrin treatment.

The study results were much as hoped. First, taste assessments that were scored as abnormal were found for individuals with high concentrations of iron in their saliva, and who also had unusual levels of various salivary immune proteins—for example, low levels of salivary alpha-amylase, and of proteins known as PIP (or prolactin-inducible protein) and zinc-alpha-2-glycoprotein. The treatment—taking three lactoferrin tablets per day for a month—significantly lowered the sensory abnormality scores of the cancer patients. Curiously, the improvements continued for another 30 days, even though the treatment stopped. These patterns were reflected in the changes recorded for chemical constituents of saliva. Iron levels reduced in response to lactoferrin supplementation, and also kept reducing for an extra month. PIP and zinc-alpha-2-glycoprotein saw an uptick in their levels at 30 days, and salivary alpha-amylase also appeared to have been upregulated. Generally, however, changes in the levels of relevant proteins did not persist beyond the month of treatment.

The researchers who ran the study believe that several mechanisms explain their findings. The first and most obvious is that lactoferrin in saliva was binding free iron that was more common in the saliva of people undergoing chemotherapy. But the results showing changes in levels of salivary proteins also suggest that the treatment reduced the metallic taste in these individuals’ mouths by triggering shifts in mucosal immunity—in other words, by stimulating the production of anti-inflammatory and anti-bacterial proteins. It is furthermore possible that lactoferrin could have relieved the metallic taste by helping in some way with the repair of neurodegeneration—although this is was not demonstrated by the experiment.

The number of cancer patients in this study is small, but the outcome is very promising and in line with earlier research. Moreover, the healthy subjects did not experience a hike in their salivary lactoferrin levels during supplementation, presumably because their livers were breaking down excess levels of it. This research suggests a straightforward and fairly low-cost way of improving the quality of life for many, many people having a rough time. Indeed, there are thought to be about two million people in the United States alone who experience abnormal taste and smell due to chemotherapy treatment [2]—and many more millions worldwide.