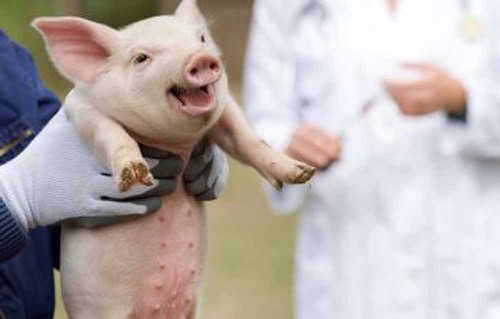 Infants develop rapidly in the first six months after birth, and breastfeeding has been shown to improve various aspects of this early development. Researchers have made efforts to figure out which components of human milk contribute to these beneficial effects. A pair of recent studies find that adding prebiotics and two compounds typically enriched in human milk to piglets’ diets can improve their gut and brain development.

In the new studies, led by Sharon Donovan [1,2] at the University of Illinois, piglets were either fed formula alone, or formula supplemented with prebiotics, the milk protein lactoferrin, and the membrane—called bovine milk fat globule membrane (MFGM)—that encases milk fats and that is rich in bioactive proteins. The researchers found that these additions to the piglets’ diets improved their neurodevelopment, increased their body weight, and decreased the proportion of opportunistic pathogens in their guts.

Both lactoferrin and MFGM have been reported to independently influence brain and gut development [3-5]. “One issue is, most of them have been studied one factor at at time,” says Donovan. “That’s not the way breastfed infants are exposed to these bioactives,” she says. “Basically the goal of this study was to look at these components together, thinking that their modes of action may be different and could therefore potentially have synergistic effects,” says Donovan. The researchers also included a couple of prebiotics that are typically added to infant formulas to their experimental diet. “We were able to show some benefit of the combined ingredients,” she says.

The study was funded by a grant from Mead Johnson Nutrition, which produces infant formula. “They have an interest in assessing the addition of bioactive bovine milk components to infant formulas to basically make formulas more similar to human milk and potentially improve infant outcomes,” says Donovan. Lactoferrin is typically present at much lower concentrations in formula than in human milk, and MFGM is typically absent from formula because of the way formulas are currently made, Donovan says.

Donovan says she expects both lactoferrin and MFGM to be added to formula eventually, and more studies of their effects will help. “Every ingredient added to formula increases the cost, and we also need to make sure that there’s no unforeseen detrimental effect that might occur,” Donovan says. “Our goal is to use the piglet as a preclinical model to help us understand how some of these bioactive compounds are working.”

In one study, Donovan and her group found that piglets given a diet containing lactoferrin, MFGM, and prebiotics were more neurodevelopmentally advanced than piglets without the diet, with differences in gray and white matter concentrations [1]. Donovan suggests that adding these components to formula could potentially also improve neurodevelopment in human infants. A previous study found that infants given formula supplemented with MFGM exhibited higher cognitive scores than infants fed formula without MFGM, and were no different than breast-fed infants [3].

In the second study, the researchers shifted their sights from the brain to the gut. Piglets fed formula supplemented with lactoferrin, MFGM, and prebiotics experienced increased weight gain, and “we found a number of potential benefits to gut development, and differences in the microbiota,” says Donovan. “One of the things that was good was that the relative abundance of potential pathogens was reduced,” she says.

There has been growing speculation about the role of the microbiome in influencing brain function, and as a result, the researchers also looked for certain neurotransmitters found in the gut, such as tyrosine hydroxylase and vasoactive intestinal peptide. The researchers found that their experimental diet increased the number of cells positive for VIP and TH, indicating that the diet may play a role in influencing the gut-brain-axis. This is one of the first attempts to characterize these neurotransmitters in the gut, and it’s something that Donovan plans to look at in more detail. “We’ve learned a little bit, but we obviously know that we still need to do more work in this area,” Donovan says.

The results in piglets are encouraging, and Donovan plans to further characterize the mechanisms of the diet-related changes. “Piglet gut is a very rapidly growing tissue, and typically it’s kind of difficult to increase the growth, because it’s already a system that has its pedal to the metal,” says Donovan. “That suggests that these factors are indeed doing something, because it’s hard to increase a system that’s already growing at its maximal rate,” she says.

The results could have important implications in human infants. “If you have infants that have compromised gut development, or maybe an infant that has had some sort of damage to the gut, then having components that can help in that process can potentially help those infants to recover more quickly,” says Donovan.