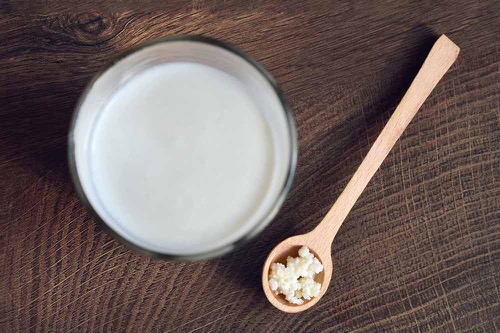 The nearly 100 trillion bacteria that live in our gastrointestinal tract aren’t just involved in food digestion; they influence the health and function of the entire body. Mounting evidence suggests gut microbes may even influence the brain, including behavior [1, 2]. This connection between the gut and the brain is called the gut-brain axis and is a complex network of signaling pathways linking the central nervous system with the enteric (or gastrointestinal) nervous system.

Fermented foods are known to influence the composition and quantity of bacteria living in our guts—does this mean that fermented foods could alter behaviors, and possibly even our moods? A new study [1] in mice demonstrated that kefir, a fermented milk drink, influenced the host’s gut microbiome and in turn, the host’s behavior. If these findings are confirmed in humans, it will give a whole new meaning to the phrase “emotional eating.”

From Milk to Kefir

SCOBY may sound like a 1980s cartoon about a crime-fighting dog but is actually a living culture of bacteria and yeast used to make fermented foods and drinks. The addition of SCOBY (symbiotic culture of bacteria and yeast) to foods transforms them in taste and composition; tea becomes kombucha, cabbage becomes kimchi, and milk becomes kefir. These fermented foods are usually more acidic and “tangy,” and have health benefits beyond those attributed to the starter food [3].

The SCOBY used to make kefir are called kefir grains, which look more like cauliflower than a grain of wheat or rice. Types of kefir grains vary in microbial species but usually include lactic acid bacteria, like Lactobacillus, and acetic acid bacteria, along with yeasts. These bacteria break down much of the lactose in milk, making it easier to digest. But lactic acid bacteria also break apart milk proteins, which increases the concentration of biologically active peptides. Kefir also has significantly more microbes than does milk; as the bacteria and yeast from the SCOBY dine on milk sugars, they increase in numbers.

Higher concentrations of biologically active peptides and micro-organisms give kefir unique health benefits beyond those found in milk, including anti-inflammatory effects, reduction in hypertension, stimulation of the immune system, and anti-microbial properties [1, 4]. In animal models, kefir has altered the composition of the gut microbiome, and a small number of human studies suggest that kefir can improve mood, such as decreased social anxiety [1]. A new study [1] from a team of Irish researchers looks to bridge these two findings by testing the effects of two types of milk kefirs on behaviors related to anxiety and depression in mice.

Is Kefir a Psychobiotic?

Psychobiotics are microbes that influence mental health and mood. Fermented foods like kefir could be classified as psychobiotics if they are shown to regulate mood or behaviors associated with mood (e.g., reward-seeking behavior).

To test their hypothesis, the research team created four treatment groups of mice: group 1 were fed cow’s milk as a control, group 2 were fed kefir type Fr1, group 3 were fed kefir type UK4, and group 4 were undisturbed (as oral tube feeding of milk or kefir could potentially influence behavior). The two kefir types were made with different kefir grains, meaning they differed in the types of bacteria present in the SCOBY. Using two different kefirs allowed the team to attribute the changes in behavior to the action of microbiota, as opposed to some other ingredient found in all kefirs. Behavioral assessments took place after three weeks of daily feeding and involved a series of tests that are commonly used to assign a behavioral phenotype to mice [1].

The researchers predicted that the differences in bacterial species between Fr1 and UK4 would result in behavioral differences between group 2 and group 3, and this was supported by their results. Kefir Fr1 increased reward-seeking behavior whereas UK4 decreased repetitive behavior. Moreover, they could link these behaviors to specific changes in gut microbiota associated with each kefir. For example, Fr1 increased reward-seeking behavior and also increased the gut bacteria Parabaceroides goldsteinii. Higher levels of P. goldsteinii were then linked to an increase in the synthesis of a neuroactive compound, S-adenosylmethionine, known to increase reward-seeking behavior [1]. In humans, depression is associated with a decrease in reward-seeking behavior. S-adenosylmethionine supplementation has been studied as a treatment for depression, providing additional support for a connection between P. goldsteinii and the observed behavioral changes.

Both kefirs were found to regulate the functional capacity of the host’s gut microbiota and both also led to changes in the quantity of compounds that interact with the central nervous system, what the researchers refer to as gut-brain modules or GBMs [1]. Of particular importance was the finding that both types of kefir increased levels of Lactobacillus reuteri, which was linked to an increase in the ability to make the neurotransmitter gamma-aminobutyric acid (GABA) [1]. Low levels of GABA in humans and animal models are linked to anxiety and mood disorders, but further studies are needed to determine whether levels of gut-derived GABA can improve mood [1].