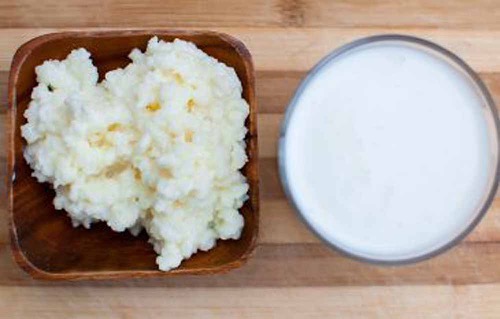 Kefir is a fermented dairy drink that is becoming increasingly popular in the United States, and has been shown to have beneficial health effects [1]. The drink is made by incubating heat-treated milk with “kefir grains,” which contain sugars, proteins, lactic acid bacteria, and yeast [2-4]. The kefir microorganisms are known to ferment milk lactose, but it is still unclear how they affect milk proteins and whether they break these proteins down into peptides.

“It’s sort of this black box,” says David Dallas at Oregon State University. In a new study, Dallas and his team conducted the most exhaustive analysis to date of the milk peptides released during kefir fermentation [5]. “We wanted to find out what’s going on during the kefir fermentation, and what kind of functional peptides are produced,” he says.

The researchers found that the kefir microorganisms extensively digested milk proteins during kefir fermentation, resulting in the release of a large number of peptides. “It was surprising to find that there were thousands of peptides there, and all sorts of protein changes that are not visible to the eye but visible with a mass spectrometer,” Dallas says. “I think that’s pretty cool,” he says.

Dallas’s group identified 1,591 peptides released during kefir fermentation, out of which 609 were unique to kefir, and they also saw changes in the abundance of more than 1,500 peptides. “I think it’s just really interesting to see that these kefir microorganisms are basically chopping up so much of these proteins with these external proteases that they produce, and using those for their growth,” says Dallas. “It’s not just this lactose fermentation picture that we had been looking at for such a long time,” he says.

The researchers then checked whether any of the identified peptides were known to have biological activity. “We basically took all of the peptide sequences that we found and then we compared them to a list that we put together from the literature,” says Dallas.

The group identified 25 peptides with a variety of biological functions, including antimicrobial, antihypertensive, immunomodulatory, and anti-oxidative peptides [6]. “People have a lot of different health beliefs about kefir, and it’s possible that some of those are coming from the peptides as opposed to other components,” says Dallas.

The fact that milk proteins are broken down during kefir fermentation may have implications for digestive health. “The other potential implication is that because you have at least some degree of digestion happening here, that kefir, or other things like it, these could be ideal foods for people who have trouble digesting proteins,” says Dallas [7-10].

Undigested proteins can survive all the way into the colon, where they can serve as a food source for bacteria that produce inflammatory or toxic metabolites. “Clearly that’s something that you want to avoid,” says Dallas. “So if you have problems digesting—people who have different problems like ulcerative colitis or inflammatory bowel disease, people with antacid medication, or the elderly—this might be a good food for them,” he says.

Dallas plans to look in more detail at how protein digestion affects the health, immunity, and microbial profile of the gut. Researchers could compare the effects of kefir to those of other foods with more intact proteins, he says.

The techniques used in the study could also have implications for kefir manufacturing. “You could use peptidomics as a way to monitor the kefir that you’re producing to see how much variation there is from batch to batch,” says Dallas. “Perhaps you could ferment longer to produce more peptides, or select which bacteria you want to use for your fermentation to produce peptides,” he says.

“I think that there could be lot of interesting research in that area, to make specialized kefir,” says Dallas. “I think there’s a lot of ideas that could be followed up on,” he says.