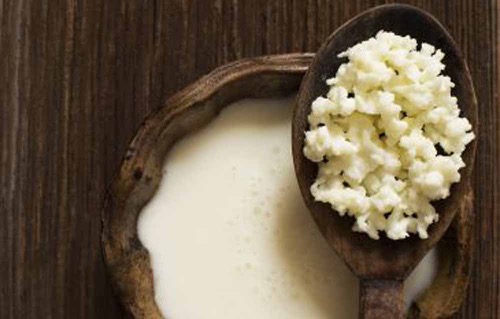 Kefir, an ancient cultured dairy drink touted as a health-promoting probiotic, is coming back into fashion in Europe and gaining popularity in the US. With its fizzy freshness and mildly acidic flavor, kefir (pronounced “keh-FEAR”) likely owes its name to a similar Turkish word meaning “good feeling.” Fermented by yeast and bacteria in a unique way, kefir has been shown to promote gut health and boost the immune system, among other beneficial effects (1, 2). Kefir has even been credited with beginning “a new dawn of food” (1), while commercial producers and home brewers are experimenting with modern recipes and flavored variants.

Perhaps not since the dawn of time, but at least for some 12,000 years, humans have exploited fermentation of certain foods, including milk, to keep it from spoiling. Apart from making the milk safe to consume and store for extended periods, fermentation also gave rise to appealing flavors and textures, and made the milk more digestible. Yogurt, for instance, is a fermented milk product that even lactose intolerant people can easily digest (3). Kefir has been called “the yogurt of the 21st century” (4) in view of its renaissance in Western countries; however, its roots stretch back thousands of years to the Caucasus Mountains, at the border of Europe and Asia.

In Russia and other parts of Eastern Europe, kefir has long traditions and, owing to its purported health benefits, is commonly given to patients in hospitals and recommended for babies and the ill (2). While scientific studies have demonstrated a number of beneficial effects of kefir—including immune-boosting, antimicrobial and anti-cancer effects, as well as improved gut health and lactose digestion (1)—more studies are needed to provide conclusive evidence.

The drink, which has the consistency of thin yogurt, found its way into Western Europe decades ago, but its popularity has waxed and waned. In today’s Scandinavia, for instance, many remember it as an old-fashioned drink favored by their parents or grandparents back in Abba’s heyday of the 1970s. But as Abba did, kefir is regaining popularity—although it’s not yet produced commercially in all of Europe. In some places, it’s only sold in occasional corner stores, often run by immigrants. Perhaps this somewhat variable availability has contributed to the growing “subculture” of health-conscious aficionados who brew their own kefir, share recipes online, and even send clumps of starter culture to fellow kefir lovers.

So, what exactly is this kefir culturing all about, and what’s special about it? The traditional way of making it is based on an “immortal” substance called kefir grains—not to be confused with food grains. Resembling tiny, slimy cauliflower florets or clumps of sticky rice, kefir grains are a kind of compact curd made up of lactic acid bacteria, acetic acid bacteria, and yeast cells embedded in milk proteins and kefirans—a type of complex sugars produced by bacteria. The first kefir grains arose spontaneously inside goatskin bags used for fermentation of milk; the grains have since been passed along and propagated during the long tradition of kefir making.

Added to a batch of fresh milk, the grains kick-start the fermentation of lactose and other milk ingredients, resulting in kefir after a day or so. The grains are then filtered out and used to inoculate the next batch. Kefir grains can be used with a wide range of temperatures and types of milk, including cow, goat, or sheep milk. Furthermore, they practically never die—making kefir ideal for home brewing.

This is different from the traditional fermentation of yogurts and other milk products, which commonly starts with the practice of “back-slopping,” or inoculation of fresh milk with a portion of the previous fermented batch. But yogurt cultures quickly lose their potency, and new starter culture must be obtained regularly.

Adding to kefir’s uniqueness is the presence of yeast in the kefir grains, producing a naturally carbonated drink containing a tiny amount of alcohol. Owing to its carbonation and alcohol, kefir has aptly been called “the champagne of milk” (5). Commercially available brands of kefir, however, do not always contain carbonation and alcohol.

But commercial starter cultures lack the “immortality” of kefir grains, as well as some of the mystery and individuality of the walnut-sized “villages” that the grains are—housing some 30-odd microbial species. This tends to remove some of the drink’s “kefirness”—especially when commercial starter cultures without yeast are used, resulting in a flat and non-alcoholic product very similar to yogurt. The particular microbial populations of individual kefir grains may also contribute to the sensory, as well as the potentially therapeutic characteristics of the final product (6). Perhaps that’s part of the reason kefir is commonly produced as an artisanal beverage. So far, artisanal production seems to be the most common form in the US, where the beverage is beginning to gain a foothold (2).

With kefir’s popularity on the rise globally—coinciding with an all-time high focus in the food industry on probiotics, or beneficial bacteria—we can no doubt expect more research on kefir in years to come. This will help scientists better understand and document its health-promoting potential, and could also lead to improved technological processes that might enable commercial production of “true” kefir.