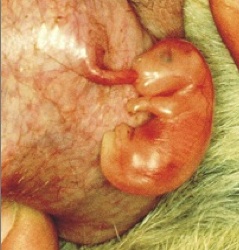 If a human mother were like a kangaroo, her “baby” would be born after only one month of gestation. Immediately after birth, her embryonic “baby” would crawl-climb up to one of her nipples and attach to one nipple, and not let go for the next 15 weeks. The “baby” nurses continually from the same nipple, drinking milk that is entirely different in composition from the milk consumed by the baby’s older brother or sister from the mother’s other nipple. The older sibling does not nurse continually. He or she bounces off to play and eat other food, and comes back to sip at the “Fountain of Mom” using the nipple not occupied by the newborn.

In the real world, human mothers are not like kangaroos. When an embryo is born, it dies. Human babies become viable at 23-24 weeks gestation, but even with the best care, only about half of them survive, and those who do survive have lifelong disabilities. The World Health Organization reports that more than 20 million infants are born with low birth weights each year, representing 15.5% of all births. More than 95% of these babies are born in developing countries. Many premature or low-birth weight babies have underdeveloped lungs that make breathing difficult, and the baby’s digestive system is not yet mature enough to effectively process breast milk. The lesson from kangaroos is that life may be possible outside of the womb at a younger age of gestation, but that life needs to be supported by a continuous supply of milk that is specially formulated for their developmental stage.

What’s so special about kangaroo milk?

Kangaroos are large, so scientists mostly study their smaller cousin, the tammar wallaby. Painstakingly conducted cross-fostering studies in tammars—where a baby born from one mom is nursed by another another—demonstrate developmental stage differences. Trott et al. (2003) and Waite et al. (2005) examined the effect of fostering groups of 60-day-old tammar young onto a group of host mothers at a more advanced stage of lactation. The rate of growth of the foster pouch young (those suckling milk meant for older tammars) was significantly increased relative to the control pouch young (those drinking age-appropriate milk). Subsequent experiments (Kwek et al., 2009) extended these studies and showed the more “mature” milk not only increased growth of the fostered young, but also accelerated development of the stomach. This development appeared to result from direct action of the milk on the stomach, although colonization of the gut, which is also controlled by the milk, most likely contributed to this process (Kwek et al., 2009). Therefore, as a general concept, it may be assumed that the progressive changes in marsupial milk composition have evolved to regulate specific developmental processes.

Human babies born too soon have fragile lungs, intestines, and skin, amid a sea of hospital pathogens. What is in kangaroo milk that allows their fragile babies to survive pathogens outside of the womb? Some antibacterials, such as cathelicidin and WFDC-2, are present only during very early lactation or during weaning (Kwek et al., 2013). In early lactation, these antibacterials may protect the baby from pathogens in the environment, while their function during weaning may be to protect the mammary gland from infection (Kwek et al., 2013).

A major challenge for scientists is to identify similarly helpful compounds in human milk and understand how they can be used as pharmaceuticals and nutriceuticals for improved health outcomes in premature infants. Recent studies on one of those antibacterials—cathelicidin—highlighted how difficult that challenge can be. Different parts of the same protein can have different functions depending on the stage of lactation. During early lactation, the more proteins were produced from the part of the cathelicidin gene that is anti-bacterial, presumably to protect the young against infection (Wanyonyi et al., 2012). The expression of this same part of the gene increased again in late involution (weaning), presumably to protect the mammary gland from mastistis (Wanyonyi et al., 2012). In contrast, there was a three-fold increase in expression of a different part of the same gene in mid-lactation, which has the capacity to increase mammary gland growth and thus increase milk production (Wanyonyi et al., 2013). Thus, for scientists it is not even as simple as finding one magic gene. We must understand the “when,” “what,” and “how” of every component in milk.

Around the world, skin-to-skin contact between adult and baby, known as “Kangaroo care,” is a common, cost-effective technique to keep babies warm, especially those that are born too soon. In addition to temperature regulation, Kangaroo care helps maintain the baby’s heart and respiratory rate. In premature and low-birth weight babies, Kangaroo care is associated with improved weight gain, lower stress levels, improved cognitive and motor development, and reduced pain response. In full-term babies, Kangaroo care is also known to promote successful breastfeeding. Now that we know kangaroos produce special milk to protect their immature young, perhaps we can expand our definition of Kangaroo care for preemies to include kangaroo milk-inspired therapeutics.