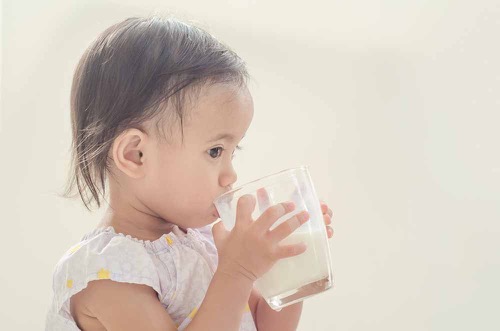 After hundreds of thousands of years of evolution and carrying the unrelenting burden of survival of the fittest, humans have increasingly become allergic to food [1-4]. Who would have thought? It seems like the ultimate contradiction of our time. Heading the list of serial offenders are nuts, seafood, eggs, wheat, soy, and cow’s milk [5-7]. About 8% of children and 5% of adults in Western countries are diagnosed with food allergies [8]. Scientists agree that the priming of allergic responses (sensitization) to some foods and the development of normal tolerance to foods generally occurs early in life [1,6,9]. Over the last two decades, the health authorities’ recommendations for when to introduce some of these foods to infants have radically changed as clinical investigators reveal new information that directly conflicts with past practices. One area of some confusion relates to the reason for the recommended late introduction of liquid cow’s milk to infants.

What Is Food Allergy?

Immune cells in the body are always on high alert so they can rapidly foil any attempted invasion by bacteria, viruses, and fungi. However, these cellular sentries can be a little trigger happy. Sometimes they open fire with their full chemical arsenal when they mistake, at the molecular level, a food component for a microbial invader. The cost of this error in judgement is tissue irritation and damage that then causes the symptoms typical of allergies. The history of human evolution has impersonally judged that, overall, there is more benefit from maintaining a highly vigilant immune system that protects the body from the threat of microbial diseases than the biological cost of allergic reactions in some individuals. An allergy is a hypersensitive immune response to a substance that is normally not harmful to most people. The inflammation caused by the immune response increases blood flow to the tissue delivering eager cellular reinforcements that have a futile anticipation of battle with phantom microbial invaders. It takes a while for the cells to embarrassingly realize their mistake and allow everything to settle down.

Medical authorities report that food allergies can result in varied symptoms and severity, which typically occur within a few hours of ingestion of the food [6,10,11]. The body systems affected include the skin (hives and swelling), gastrointestinal tract (vomiting and stomach cramps), respiratory tract (shortness of breath, wheezing, cough), and the cardiovascular system (weak pulse) [6,12,13]. In rare instances, severe food allergies result in anaphylaxis, a potentially life-threatening condition that sends the body into shock. Medical authorities note that specific food allergies usually occur in association with other forms of allergy. Infants with eczema are at higher risk of food allergy and asthma (citations in [14]), while 10–15% of infants who are allergic to cow’s milk are also allergic to soy [15]. The immune system works in mysterious ways! The factors driving the increased incidence of food allergies are still unclear, although there is a long list of suspects.

Most national health authorities recommend that, ideally, infants should be introduced to solid foods after exclusive breast feeding for the first four to six months [3]. In the year 2000, the American Academy of Pediatrics recommended delays for the introduction of foods potentially causing allergies in at-risk infants i.e., infants with multiple allergies or having at least one parent with an allergy [16]. This included delays to 1 year of age for dairy products, 2 years for eggs, and 3 years for peanuts, nuts, and fish. The rationale, with little or no supportive scientific evidence, was that the avoidance of allergenic foods during the critical period when the infant’s immune system is developing tolerance to newly introduced foods (around 4–6 months of age) would decrease the incidence of food allergies. However, after the adoption of these recommendations, the incidence of food allergies in infants kept increasing [2]. The American Society of Pediatrics in 2008 then amended its earlier recommendations based on a consensus of new scientific advice that concluded there was insufficient scientific evidence for benefit to at-risk infants from the delayed introduction of allergenic foods [17-20]. The recommendation also applied to the general population of infants (citations in [12]). More recently, Larson and colleagues confirmed this conclusion based on a retrospective analysis of 14 large-scale clinical investigations [6]. Strikingly, scientists now report that the introduction of peanuts and eggs to at-risk and general populations of infants aged 4–6 months decreases the incidence of corresponding allergic responses (citations in [12]). Scientific evidence has a habit of turning up the unexpected! For these reasons, most infant feeding guidelines from health authorities indicate that “parents should not delay introduction of ‘allergenic’ foods beyond 4–6 months, provided the children are developmentally ready [21-23].”

The Australasian Society of Clinical Immunology and Asthma (ASCIA) provides useful information about cow’s milk allergy. ASCIA explains that cow’s milk allergy is not the same as lactose intolerance, a common misconception, and it affects about 1 in 50 infants, with most outgrowing the allergy by the age of 3–5 years [13]. They note the substantial evidence that cow’s milk allergy is an inflammatory response to proteins present in cow’s milk, and that the allergy symptoms occur within 15 minutes to two hours of exposure to the milk. The symptoms include hives, swelling (lips, tongue, face, or eyes), vomiting, diarrhea, and noisy breathing [13].

Tran and colleagues, using a population of over 2,000 children, concluded that delaying the introduction of cow’s milk beyond one year of age was associated with increased risk of milk protein allergy [21]. Despite this conclusion, and the similar scientific information available for other food allergies, health authorities still recommend the delay of the introduction of cow’s milk to infants until after 12 months of age (9 months in Canada). This recommendation has not changed over the last 18 years [24]. However, there is a strong reason to retain the recommendation, and it has no relationship with allergy. It is primarily related to iron deficiency.

Too much Calcium and Not Enough Iron at a Critical Time

Many scientists report that infants younger than 12 months have a big demand for iron to adequately support their growth and development [24-27]. Iron is essential for forming red blood cells that carry oxygen, and for myriad biochemical reactions making essential molecules inside cells. Medical researchers emphasize that infants during this period are at higher risk of iron deficiency (anemia) [24-27]. Although the energy contents of cow and human milks are similar, cow’s milk has much more protein and calcium but less iron [28]. The higher calcium level in cow’s milk also compounds its low level of iron, as calcium decreases the ability of an infant to absorb ingested iron [28]. This is not an issue at later ages when there are multiple dietary sources of iron and it is more efficiently absorbed by the gut. Consequently, clinicians warn that infants before 12 months of age and after cessation of breast feeding can become deficient in iron if they are fed exclusively on cow’s milk (formula milk is usually fortified with iron) [24,26,27]. The current health authority recommendation in many countries to delay the introduction of cow’s milk until infants are aged 12 months is based on the need to provide adequate amounts of iron to these young infants. Serendipity is amazing. The original recommendation in 2000 to delay the introduction of cow’s milk to infants until 12 months of age was partially based on the false expectation of avoiding allergy to cow’s milk, but the recommendation helped prevent anemia in young and vulnerable infants.

For parents, it is tough navigating the complex and changing maze of dietary recommendations for infants. The current challenge for health authorities is to weigh the quality of scientific evidence and then reach a consensus recommendation; all pieces of evidence are not of equal value. Presently, there is a strong scientific consensus that the delayed introduction of potentially allergenic foods to the general population of infants beyond 12 months does not decrease their risk of allergies, and in some cases may increase risk. The recommended delay in the introduction of cow’s milk protein to infants until they are older than 12 months ensures that younger infants gain sufficient iron from their formula or breast milk diet to support their growth, but it does not diminish the risk of allergy to cow’s milk. The recommendation for cow’s milk may need to be modified. Cow’s milk should not replace infant formula or breast milk until after 12 months of age, but there should be earlier exposure of infants to small amounts of cow’s milk, which may decrease their risk of developing allergy to cow’s milk.