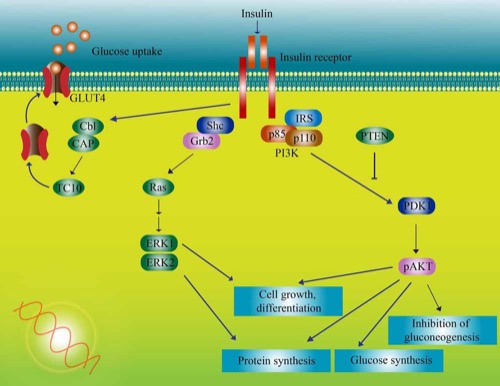 Pregnancy hormones transform cells in the mammary gland into milk-producing cells. After birth, hormones such as insulin regulate milk production. Does insulin also influence mammary gland cells during pregnancy? A recent study by Peggy Neville and her colleagues from the University of Colorado, (Neville MC et al., 2013) demonstrated that insulin is a primary driver of cellular transformation during pregnancy.

We know insulin as a regulator of blood sugar, but it also influences cell growth and differentiation. This is especially relevant to mammary tissue during pregnancy and lactation. A role for insulin in lactation has been accepted for some time, but some questions have remained about its role during pregnancy when the mammary gland is developing—and the relative roles of insulin and insulin-like growth factors. Clarifying the role of insulin in lactation was the aim of the study by Neville and colleagues. They used a mouse model system, and in an elegant approach, bred a mouse line in which the receptor for insulin was selectively deleted in the cells that produce milk.

Insulin is a ubiquitous hormone found throughout the tissues of the body and is essential to life. This has made the study of insulin a little complicated since any attempts to modulate the level of insulin have a marked impact on the entire system, and without careful regulation, will result in metabolic meltdown. Understanding its role in mammary gland development during pregnancy needed a clever approach. Like all hormones, insulin needs a receptor to perform its normal functions. In fact, all of the relevant actions and effects of insulin happen inside cells as a result of the signals that insulin receptors convey to the cellular machinery, including the engine room of the cell, structures called mitochondria, and the genes that turn “on” and “off.”  Neville found a way to understand the effects of insulin by targeted deletion of the insulin receptor in the mammary gland of selected mice. In this way, the insulin continued to have its normal effect on all tissues in the body except for the mammary glands.

The first observations in these mice were clear: the baby mice (pups) were very small. The gain in weight of these pups was severely restricted, indicating that the mother was unable to produce enough milk for normal growth rates. In fact, their growth rate was only about 25% of normal, and at weaning, the mice were very small. When the mammary gland structure and contents were examined, the investigators found far fewer milk-producing cells than in normal mice, and most of the milk protein and fat normally found in these cells was lacking. Thus, there was a reduction in both the total amount of mammary tissue, and of the milk-producing capacity of the remaining tissue. Clearly, the ablation of the insulin receptor had profound effects on the mammary glands of these mice.

Knowing that a number of growth factors related to insulin—insulin-like growth factors (IGFs)—may use the same receptors as insulin, Neville and her team set out to prove that the effects were due to insulin, and not these other factors, but how to do this was the challenge. They turned to their experience with cell culture systems, especially the growth of a test tube version of the mammary gland milk-producing cell structure, variously referred to as acini or mammospheres. The development of these structures was sensitive to insulin, but insensitive to IGFs. Once formed, they were induced to secrete milk, and again, the secretion was found to be insulin-sensitive, but was not IGF-sensitive.

Finally, the team analyzed the differences in the expression profiles of 22,000 genes from milk producing cells with and without the insulin receptor. They found a definite pattern of differences in gene families that were associated with mammary gland differentiation and function. The patterns indicated that insulin is important for turning on the cell program that leads to milk production in late pregnancy.

These findings suggest significant implications for the current surge in gestational diabetes seen throughout the western world and highlight the potential impact of metabolic disturbances caused by obesity and diabetes on lactation. Diabetic, obese mothers have a difficult time producing milk, and we’re just now starting to understand why.