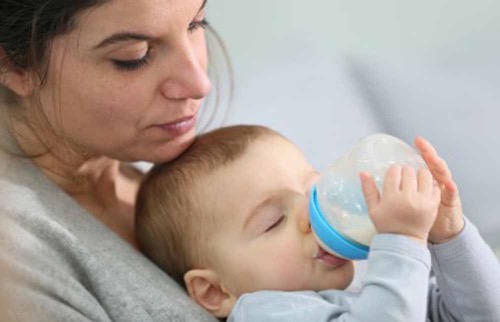 There is a plethora of ways in which the composition of infant formula differs from that of breast milk. For one, the latter has a far greater diversity of ingredients, which are still not exhaustively known. But there are also plenty of known constituents of breast milk that are absent from infant formula. One team of researchers is dedicated to figuring out the implications of adding one kind of missing ingredient in particular—milk fat globule membrane (MFGM)—on infants’ health and development. Recently, this group identified some benefits to infants’ abilities to cope with infections when the infant formula they consume contains this supplement [1].

The research team in question is mainly drawn from Umeå University in Sweden and Finland’s National Institute for Health and Welfare. Their experimental formula is different from standard formulas in a few extra ways. Namely, while the experimental formula is supplemented with MFGMs, it also has some protein and energy content removed, compared to infant formulas that are available in stores. The source of MFGM is cow’s milk, which is likely to be subtly different from the MFGM found in human milk. Nonetheless, an earlier study by this team found apparent advantages in the neurodevelopment of infants’ who were fed this novel formula containing the globules, compared to formula that lacked them [3 4].

The new study [1] focuses on infants’ abilities to fight infection rather than their brain development, and compares three groups: infants who were exclusively fed breast milk for the first six months of life, infants fed only un-supplemented, standard formula from two to six months, infants who uniquely consumed the experimental, globule-containing formula from two to six months. For a whole year, parents kept diaries of their little darlings’ infections, stool types, and visits to the doctor. The researchers separately measured the infants’ antibodies, and made regular house calls to keep the parental data collection on track.

The results are fairly impressive, particularly given the generally well-kept conditions of the infants in the study. (Their families hailed from sanitary, suburban Scandinavia, rather than, for example, the streets of Calcutta, so the infants in this study were unlikely to suffer lots of infections.) When it came to the incidence of a common ear infection in children (acute otitis media), just one of the 80 infants on the experimental formula succumbed by the age of 12 months; yet seven (also out of 80) infants fed normal formula had caught the infection. Moreover, only a quarter of the infants fed experimental formula by their parents needed fever-lowering drugs in their first year of life, while 43% of those fed standard formula group did. The study was double-blinded, meaning that none of the parents could have known whether their child received experimental or standard formula.

The evidence that the experimental formula helps infants fight infections goes more than skin-deep. The antibody tests showed that the immune systems of the infants consuming MFGMs in formula were found to be less likely to flair up, or to ‘hyper-respond’. These infants had lower concentrations of antibodies that act against pneumococcal infections (specifically, various serotypes of serum immunoglobulin G), than the infants fed standard formula.

As in the neurodevelopment study [3, 4], all of these differences suggest that formula-fed infants with MFGMs in their diet are more similar to breast-fed infants than to infants fed standard formula. Put simply, the globule supplement seems to make infants who for whatever reason do not receive breast milk, healthier as well as smarter.

Why should this be? Science has a way to go in figuring out all the parts of breast milk that help babies fight infections, but some of breast milk’s known germ-fighters are components of MFGMs. The lipids in these membranes have been shown in laboratory studies to have an antiviral effect. And various proteins (as well as proteins with carbohydrate attachments) that are embedded in these lipids perform their own antimicrobial acts. Among them, the proteins known as butyrophilins, lactadherin, and mucins, have particular, germ-combating effects.

In short, the new study gives further support to the idea that swapping out the vegetable oils that are currently used for making infant formula, and swapping in fat globules from cow’s milk, would be a generally good idea. How much confidence should we have in the results? On the one hand, the number of infants involved in this study is quite small, and the researchers did not find differences in as many measures of infection-fighting as they had perhaps hoped. But, on the other hand, the substantive benefits of cutting infant infections are far less likely to be found in Scandinavia than in places where infants more commonly catch nasty bugs—which suggests we should be pretty confident. To that end, researchers elsewhere have found that adding MFGMs to the diets of Peruvian infants reduced their incidence of diarrhea [2]. Thus, to resoundingly convince the world that the new, experimental mixture is the future of infant formula, a bigger trial in a dirty, developing world city, would probably generate even more impressive results.