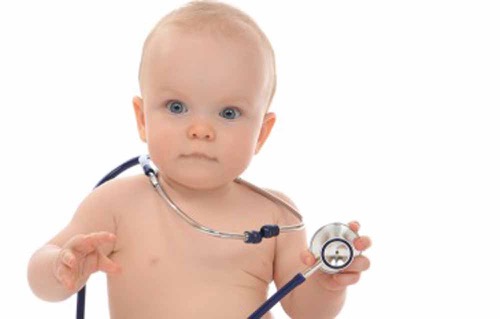 The transfer of immune components from a nursing mother to her offspring is called passive immunity. Calling this system passive, however, wrongly implies that antibodies, macrophages, and other anti-microbial factors in milk are simply along for the ride with the nutritional factors that transfer from the maternal blood stream. Numerous studies have demonstrated that maternal factors such as nutrition, stress, and illness influence the concentration of immunological constituents in milk (1-3). And now, a growing body of research, including a new study by Breakey et al. (4), indicates that passive immunity may be actively influenced by the health status of the breastfeeding infant (5-7). Can a sick infant actually increase the quantity of particular immune factors in their mother’s milk to help fight off infection?

Decades of research on human milk have firmly established that its composition is dynamic and variable across mothers. What is less clear is an understanding of the sources of this variation, and the subsequent effects of variation on offspring growth, development, and health, particularly in milk bioactive factors, such as antibodies and other immune components. Hoping to fill in some of the gaps, Breakey et al. (4) test the hypothesis that variations in human milk immunological constituents are related to infant illness.

Both frameworks require that the mother (and her mammary gland) have access to information about the infant’s health status. But just how might this work? One possibility is that the infant communicates illness directly to the mammary gland while nursing (4). Specifically, infant saliva may contain heightened levels of immune factors when first encountering a pathogen or during times of infection. In response, the mammary gland may increase production of particular immune factors or increase the transport of other immune factors that are produced in the mother’s gut or lymphatic system. Although theoretically and physiologically possible, direct empirical evidence for this scenario is currently lacking. Even if the mammary gland does not come into direct contact with infant saliva (or other bodily fluids), mothers most certainly do, particurlarly if the infant is ill. Kissing, sharing utensils, changing diapers, co-sleeping and many other nurturing activities could transmit immune cells (or pathogens) from offspring to mother, which could then influence production of milk immunological components.

Another possibility is that the mother anticipates (or assumes) illness in the infant because she is exposed to the pathogen. However, this scenario also presents an empirical challenge —determining the “intention” of the elevated immune components. Changes in immune components could be actively targeting the needs of the infant, or passively reflecting the increased concentration in the maternal bloodstream (4). And, of course, it also is plausible that it could be a little bit of both. Teasing these two apart does not change the interpretation of an immune factor as protective or responsive, however, as Breakey et al. (4) are looking only at the influence of infant illness on milk composition.

In this case, the milk samples and data on infant health came from the Toba population in northeastern Argentina. Previous research on the effect of infant illness on milk immune factors came from populations living in developed, Western countries (5-7) with lower pathogen exposure than that experienced by the Toba. Breakey et al. (4) propose that the increased pathogen exposure of the Toba may highlight any changes in milk composition that could possibly be obscured in more hygienic environments.

Thirty mother-infant pairs were visited once a month for 4-5 months during 2012 and 2013. Milk was collected at each visit, as was the information about the infant’s health at the time of the visit and in the month prior to the visit. Specifically, researchers requested information about symptoms related to gastrointestinal (vomiting, diarrhea) or respiratory illness (cough, cold, mucus). In order to test the protective and responsive frameworks, results were analyzed for three time periods: (1) symptoms in the month preceding the study visit, (2) symptoms at the time of the study visit, and (3) symptoms in the month following the study visit.

Milk compositional analyses focused on two well-studied immune factors, secretory immunoglobulin A (sIgA) and lactoferrin. SIgA is the primary antibody found in human breast milk and is derived from antibodies produced in the mother’s gut. SIgA works by binding to pathogens and keeping them from attaching to the infant’s mucosal surfaces (both respiratory and gastrointestinal). Lactoferrin is produced by epithelial cells in the mammary gland and has numerous functions in promoting host immune defense. It is perhaps best known for binding to iron in the infant’s gastrointestinal tract. Bacteria need iron for reproduction, so minimizing their access to this essential mineral inhibits their ability to proliferate.

Both sIgA and lactoferrin concentration were significantly related to reported symptoms of infant illness. Higher levels of sIgA were associated with lower incidences of illness in both the preceding and subsequent month, while higher levels of lactoferrin meant an infant was more likely to have experienced illness in the preceding month and the subsequent month. Based on these findings, they propose that sIgA fits best within the protective framework (higher concentration, healthier infants). However, lactoferrin fits best within the responsive framework (higher concentration, more symptoms of illness). Moreover, they propose that the concentration of these two factors may act as a biomarker for infant health: relatively higher sIgA can be thought of as a biomarker for a healthy infant, and higher lactoferrin as a biomarker for a sick infant (4).

While these results are exciting, they are also a bit perplexing. Why might these two immune factors have opposite relationships with infant health? Why not elevate lactoferrin production when an infection is first detected? The authors offer several possible explanations. From an evolutionary perspective, energy savings are important. It may be that the cost to the mother of producing lactoferrin exceeds that of producing sIgA, or there may be costs (or consequences) to the infant from ingesting milk with consistently high levels of lactoferrin, and thus, levels would only be elevated when the infant is experiencing an infection. From a functional perspective, the two immune factors may differ in their lifespan or how long they are effective once ingested by the infant. If lactoferrin degrades quickly, it might not be the most efficient strategy to elevate production in order to prevent infection.

The authors also concede that their study design makes it difficult to fully explain the temporal changes in immune factors. Sampling at one-month intervals may have caused them to miss important changes in sIgA or lactoferrin concentration. Collecting milk samples more frequently and having a more objective measure of infant health is suggested for future studies. Breakey et al. (4) also suggest that a larger sample size might cancel out the “noise” of chronically ill infants, or mothers that simply produce high levels of immune factors throughout lactation. But even with all of these caveats, Breakey et al. present a set of testable hypotheses about the relationship between milk immune factors and infant illness. They present strong evidence that sIgA and lactoferrin, and potentially other immunological constituents, are not simply passively transferred from mother to offspring.

3. Kawano A, Emori Y. 2013. Changes in maternal secretory immunoglobulin a levels in human milk during 12 weeks after parturition. American Journal of Human Biology, 25: 399-403.

7. Riskin A, Almog M, Peri R, Halasz K, Srugo I, Kessel A. 2011. Changes in immunomodulatory constituents of human milk in response to active infection in the nursing infant. Pediatric research, 71: 220-225.