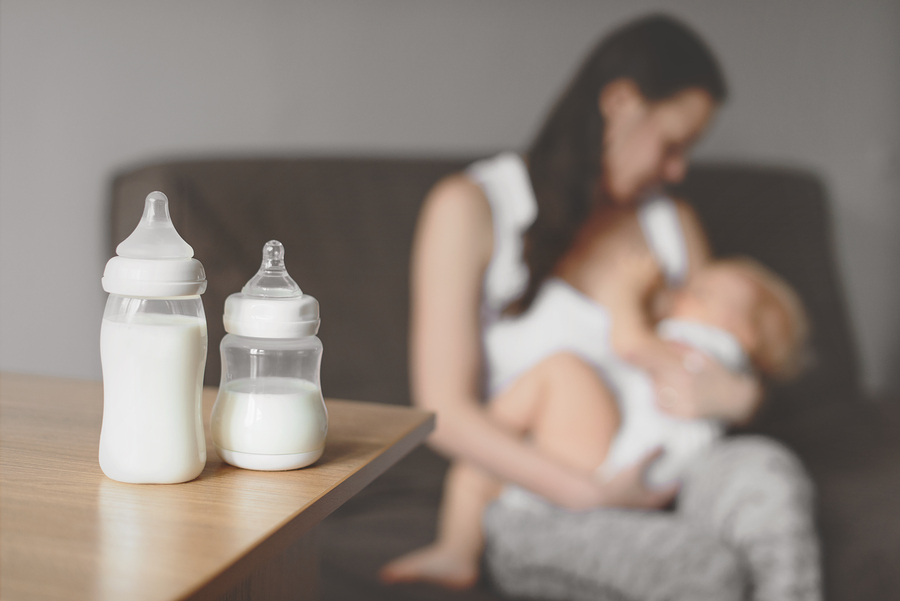 If you want to understand how an infant’s diet influences its health, you might ask, “What did the infant eat?” But the results of a new study [1] on infant diet and weight gain suggest that this simple question is no longer sufficient; in addition to asking what, we need to be asking how, and for how long. Newly published results from over 2,500 mother-infant pairs demonstrate that the longer a mother is able to directly provide breast milk, the more closely the infant’s rate of weight gain over the first 12 months of life matches the World Health Organization’s (WHO) standards [1]. Considering the prevalence of pumping among many breastfeeding mothers, these novel findings shouldn’t be reported without consideration of the many positive outcomes associated with feeding expressed breast milk.

During the first year of an infant’s life they produce a lot of data. Length, weight, and head circumference are measured in the U.S. at least every three months, along with other important developmental milestones such as rolling over, following an object with the eyes, and controlling the head. Rolling over ahead of schedule may be celebrated by parents and their physician as a sign of good coordination and muscle strength in an infant, but getting ahead of the growth charts can be cause for concern. Rapid weight gain during infancy is an established risk factor for obesity later in life; infants that gain weight too quickly and end up with excess body weight at the end of infancy are more likely to carry that weight with them into childhood and adulthood [1].

What an infant eats obviously plays a role in how quickly it gains weight, and breastfeeding has been associated with a reduced risk for developing obesity in childhood and later in life [1, 2]. However, despite being used by the WHO as the feeding standard for optimal growth outcomes [3], the mechanism connecting breastfeeding to obesity is still unclear [1, 2].

“The link between breastfeeding and lower obesity risk might be because of differences in bioactives altering metabolic development in bottle-fed babies, leading them to grow faster, or store more fat” explains Dr. Melanie A. Martin, an Assistant Professor of Anthropology at the University of Washington who studies biocultural influences on growth, development, and reproduction but was not involved with this study. “But a second possibility, supported by a good amount of research, is that infants don’t self-regulate as well when they are nursing from a bottle. Caregiver feeding can also play a role in this, in that adults may be conditioned to giving infants a set amount of liquid and thinking they need to finish it rather than looking for infant cues of satiety.”

It is important to notice that Martin distinguishes between breastfeeding and bottle-feeding, rather than breast milk and formula. Bottles are not simply for formula anymore. “Studies consistently show that pumping is part of breastfeeding for American mothers, but few researchers are actually studying women’s experiences with pumping,” says human biologist Dr. EA Quinn, an Associate Professor of Anthropology at Washington University in St. Louis who studies human milk composition and breastfeeding, but was not involved with this study. Considering the prevalence of pumping, it may seem surprising that studies examining infant diet and weight gain rarely distinguish between direct breastfeeding (at the breast) and bottled breast milk feeding.

Across the entire CHILD birth cohort, breastfeeding was inversely associated with BMI, weight gain velocity, and risk of overweight at 12 months of age [1]. However, the longer an infant was directly breastfed, the closer their BMI Z-score matched WHO infant growth standards (i.e., the closer it was to zero).

Infants that followed the WHO’s recommendation of at least 6 months of exclusive breastfeeding had a mean BMI Z-score of −0.4. Over half (54.6% to be exact) of the infants in the group of exclusively breastfed at 6 months occasionally received some expressed breast milk, and when analyzed separately, their BMI Z-scores were significantly higher (mean BMI Z-score of +0.14) than those that only nursed directly (−0.02) [1]. Importantly, they were still leaner than infants that were only partially breastfed (breast milk and formula, (+0.28) or not breastfed at all (+0.45).

“We need to collectively recognize that every mom and baby are different, have different needs and challenges, and have different pathways to achieving what is optimal for them,” says Martin. “Some mothers are always going to have working conflicts or other obstacles that don’t align with optimal practice. So we need to dually emphasize practical solutions and realities.”

The Message to Mothers

In order to offer practical solutions, we first need to identify the problem. Why would pumped breast milk alter infant BMI and rate of weight gain? “Very, very few studies have looked at the effects of long-term storage under home conditions on human milk,” explains Quinn. “My guess, however, would be that the modification of hormones or other bioactives by freezing is not the concern.”

Instead, both Quinn and Martin believe the issue is the bottle rather than the composition of the breast milk in the bottle. And this is good news, because this can be modified. For example, when infants were fed from bottles that were weighted and opaque, caregivers fed less milk than when using clear plastic bottles [4]. Presumably, they stopped feeding based on infant cues of satiety as opposed to how much milk they could see or feel was left in the bottle. Although it is not identical to infant self-regulation at the breast, these types of changes in bottle-feeding behavior may prevent overfeeding, which in turn may play a role in programming satiety [1].

When working on messaging to mothers, it is also important to look at the positive outcomes associated with feeding expressed breast milk. The WHO advocates for exclusive breastfeeding for 6 months and continued breastfeeding alongside solid foods for 12−24 months. Pumping may actually help more women meet these optimal infant-feeding standards.

“I think research, public messaging, and conversations can better support the idea that bottle-feeding can help moms achieve prolonged breastfeeding,” says Martin. Quinn agrees. “Pumping allows women to keep breastfeeding and providing their infants with human milk after they return to work when otherwise they would have to use formula. And it should be celebrated for that.”