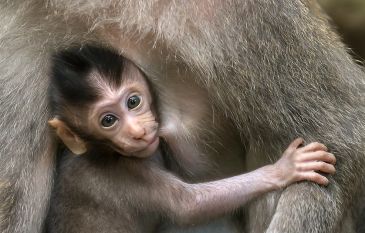 The relationship between bacteria and the immune system is usually viewed as antagonistic, but bacteria and immune cells are not always on opposite teams. In fact, the bacteria that colonize the gastrointestinal tract during infancy actually shape the development of the immune system. Research in humans and nonhuman animals indicates that the types and quantities of immune cells that the infant produces are influenced by the strains of bacteria that take up residence in the infant’s gut [1–4]. The infant’s diet is an important source of gut bacteria—does this mean that differences in early diet (i.e., mother’s milk vs. formula) could result in differences in immune function?

A team of researchers from UC Davis and UC San Francisco tested this intriguing hypothesis in a population of rhesus macaques (Macaca mulatta) housed at the California National Primate Research Center (CNPRC) [1–3]. Rhesus macaque monkeys share many biological traits with humans, including similarities in immune function and milk microbial populations [1]. Moreover, animal models allowed the researchers to control for more confounding variables than would be feasible in a human study (e.g., all monkey mothers and weaned infants consumed the same diet, a commercially-produced high-protein chow, and all monkeys were housed indoors) [1–3].

A 2013 study on CNPRC rhesus macaques demonstrated that formula-fed infants developed gut microbiomes that were different from mother’s milk-fed infants [1]. However, this study only followed the monkeys through 12 weeks of age.

“Previous work showed that the microbiota is powerfully shifted by early diet, but nobody knew how persistent those differences might be” explain study authors Dennis J. Hartigan-O’Connor, M.D. Ph.D., an Associate Professor of Medical Microbiology and Immunology at UC Davis, and Nicole R. Narayan, a graduate student in the same department. “We knew that the bacteria in the gut were important for immune function, and also that many characteristics of the immune system are stable throughout life. Putting these ideas together made us wonder if the microbes of infants might leave an indelible imprint on immunity.”

Hartigan-O’Connor and colleagues looked for this indelible imprint from gut microbiomes on immune function by following infant macaques into the juvenile period. Newborn macaques were randomly assigned to be nursery-reared (and formula-fed) or dam-reared (and milk-fed), with six infants in each group. Stool samples collected at 5, 6, 9, and 12 months were analyzed for microbial profiles [2], and blood samples taken at 5, 6, 9, and 12 months, 3 years, and 5 years were analyzed for immune cell profiles [2, 3]. The immune cell of interest was TH17 (short for T Helper 17). They selected this cell because its development is induced by gut commensal bacteria [2, 3]. Additionally, newborn macaques have very few TH17 cells. Sometime between birth and 18 months, macaques develop a TH17 cell population, which then remains stable throughout adulthood. Importantly, how many TH17 cells an adult monkey has and how quickly those populations develop varies across the population; some monkeys get high numbers quickly (about 10% of all circulating cells), others reach similar numbers more slowly, and others still make relatively fewer cells (about 1% of all circulating cells) [2]. Taken together, these observations suggest a link between adult TH17 populations and early life events, making them a prime candidate for testing hypotheses regarding diet, gut bacteria, and immunity.

Corroborating results from the 2013 study, Hartigan-O’Connor and colleagues identified distinct microbial communities between the formula- and milk-fed macaques at 6 months of age [2]. Additionally, they demonstrated that these differences remained at 12 months, even though both groups were consuming identical diets at this time point [2]. Indeed, the differences between the two groups were greater and more statistically significant at 12 months compared with 6 months, highlighting the importance of the earliest microbial colonizers to subsequent gut microbiome composition [2].

“The early postnatal life is a window of opportunity,” says Amir Ardeshir, D.V.M., M.P.V.M., Ph.D., one of the study’s lead authors and an affiliate scientist at CNPRC. “It is the key time [for beneficial bacteria] to colonize the host and establish a robust and healthy immune system.”

These findings are similar to those from a recently published study on breastfeeding and the development of the human gut microbiome [5]. Differences in gut microbiome strains between formula- and breast-fed human infants were identified before and after the introduction of solid foods, supporting the proposition that diet may make its largest impact on the gut microbiome during early infancy [5].

Immune profiles of rhesus monkeys followed the same trend as the gut microbiome, with differences between formula- and milk-fed monkeys detected at 9 months of age becoming more pronounced and statistically significant at 12 months [2].

Memory cells are what give the adaptive arm of the immune system its name and are the reason that vaccines are so effective in providing immunity. When the body is exposed to an antigen (e.g., bacteria, virus, fungus), it mounts an immune response. Part of the adaptive arm’s response involves the production of memory cells that are specific to that antigen. If the body ever encounters that antigen again, it has an experienced team of memory cells at the ready. Because they’ve fought this antigen before, memory T cells mount a more efficient and faster immune response than do naïve T cells that would be starting from scratch.

Remarkably, many of the differences in immune cell types among infant macaques were maintained into the juvenile period [3]. Although not as dramatic as identified among infants, immune profiles generated at 3–5 years old were still distinct between the formula and milk groups. This finding suggests that infant diet modulates the strength of particular immune responses during infancy and the juvenile period, and perhaps even into adulthood [3].

Unfortunately, it is not possible to say with the data at hand that infant diet was solely responsible for the differences in gut microbiomes reported by Hartigan-O’Connor and colleagues [2, 3]. Mother’s milk may be an important source of baby’s first microbes, but it is not the only source. In the previously mentioned study on the milk microbiome [5], researchers reported that 30% of the microbes in infant’s guts matched those from milk. This means the majority of gut microbes come from sources other than the infant’s diet, including the maternal skin, maternal fecal material, contact with other group members, and numerous other factors in the environment [1, 5]. Formula-fed and milk-fed infants had different diets and different exposures, as the latter were in constant contact with their mothers, whereas the former were separated at birth. It would be interesting to repeat this experiment with a third group of infants that are nursery-reared but bottle-fed with macaque milk instead of formula to try to quantify the effect of diet compared with environmental microbial exposure.

Even without a definitive source (or more likely, sources) for the infant gut microbiome, the results have important implications for understanding human immunity. Hartigan-O’Connor and Nayaran highlight the fact that their work “may help explain why genetic studies alone are insufficient to understand why certain diseases develop only in some people.” And their co-author Ardeshir agrees that the rhesus model points to the strong influence of the microbiome on responses to infection. Indeed, Ardeshir believes that the influence of the microbiota on the immune system is so profound that you could actually use features of an individual’s intestinal microbiome to predict how effective a vaccine will be. “This can be a game changer in the fight against infectious disease if we are able to improve vaccine efficacy by alteration of the microbiome with pre- or probiotics.”