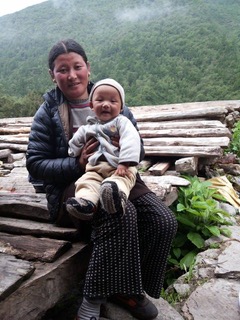 Human milk may be a complex biological fluid, but many of the ingredients that make it so complex are influenced by culture. Milk fatty acids reflect the fat content of the mother’s diet, and milk microbes have been linked to the mother’s diet, antibiotic use, and psychological stress. Now, a new study [1] reports that a mother’s subsistence strategy—that is, the way that mother’s community makes a living—affects the quantity of immune proteins in her milk. Whereas maternal antibiotic use is a novel cultural influence on milk composition, subsistence strategies have influenced the maternal pathogen experience, and likely shaped milk immune factors, throughout human evolutionary history.

Passive immunity is one of evolution’s most ingenious inventions. Baby mammals are born with immature and naïve immune systems; they are incapable of manufacturing large numbers of antibodies or other immune factors (like T cells), and their lack of exposure to pathogens means their immune responses are slow and less efficient. And yet, these infants are not entirely vulnerable to infection. While their own immune systems develop and get acquainted with the local pathogen population, infants are protected against infection by their mother’s immune factors, passed on either via the placenta or milk.

Many of the passively transferred immune components are part of the innate immune system, which is not pathogen-specific but nevertheless is integral in recognizing viruses, parasites, or bacteria as “not self” and mounting an immune response. But the real adaptive value of passive immunity comes from the transfer of the mother’s acquired immunity to her offspring. Infants may be immunologically naïve, but their mothers have had a lifetime of exposure that they share in the form of pathogen-specific immunoglobulins (antibodies) and white blood cells.

For such a system of shared immunity to be effective, it must be able to predict the types of pathogens the infant will encounter during their first months of life. In other words, milk immune factors should be correlated with both the maternal and infant environment. Despite this important assumption of passive immunity, little is known about how specific environmental factors shape milk immune composition [1].

Climate clearly plays an important role in how pathogen exposure varies globally; people living in tropical environments come in contact with a greater diversity of pathogens than those living in more temperate environments [1]. But a mother’s environment is more than simply climate; tropical populations can live in high-rise apartments in urban Singapore or in more rural agricultural villages in the Philippines. How does variation in human cultural practices shape the types and quantities of immune factors passed from mother to infant in milk?

These Are the Microbes in Your Neighborhood

To tackle this question, a team of researchers studying biocultural aspects of lactation in populations across the globe collaborated to quantify milk immune factors [1]. Seven global populations were grouped into one of the following subsistence strategies: urban-industrialism (n = 1 population), rural-shop (n = 3), horticulturalist-forager (n = 1), or agro-pastoralist (n = 2). These groups differ in population size (which relates to crowd diseases such as tuberculosis), level of interaction with soil and animals (which relates to parasitic and zoonotic diseases), and public health initiatives (e.g., access to clean drinking water and waste removal). Klein and colleagues predicted that the differences in disease ecology across these four modes of subsistence would be correlated with milk immune proteins, particularly those associated with acquired immunity [1].

The study analyzed 164 milk samples. In order to control for potential methodological errors, all samples (save for nine collected from an earlier research period) used the same, standardized collection procedure [1]. Moreover, all samples were analyzed in the same lab (UC Davis) to reduce measurement error between different assays and labs.

Populations differed more (in head-to-head comparisons, known as pair-wise comparisons) in the composition of acquired immune proteins (the quantity of sIgA, IgG, and IgM), which reflect individual interactions with pathogens compared with innate immune proteins (lactalbumin, lysozyme, and lactoferrin), which are more conserved, evolutionarily speaking. Higher milk immunoglobulin concentrations were positively associated with populations from countries with high levels of childhood mortality or higher childhood infection rates [1]. The lowest levels of milk immunoglobulins came from Boston mothers, the only urban-industrial population in the study. This supports previous research demonstrating that milk antibody concentration, particularly that of sIgA, is positively associated with the pathogen load in the environment [1].

The immunoglobulin composition of milk was different in 17 of 21 pair-wise comparisons across the seven populations. As predicted, those populations that were not significantly different shared their mode of subsistence, despite being geographically distinct (e.g., the Himba of Namibia and ethnic Tibetans in the Nubri Valley). This suggests that the mode of subsistence may be a more bioculturally meaningful comparison than country (or region) of origin, and the results reflect this: five of the six pair-wise comparisons were significantly different across the four different subsistence strategies [1]. The only exception was rural-shop (Cebu, Philippines; rural Polish; and Qom of Argentina) vs. horticultural-foragers (Tsimane, Bolivia). It may be that despite the fact that rural-shop populations purchase food from local groceries and have less dietary diversity than the Tsimane horticulturalists, other similarities in lifestyle, including exposure to livestock and agricultural activities (Cebu and Polish) and household environments, such as a lack of indoor plumbing (Qom), resulted in convergence in pathogen load [1].

This study is the first to examine the relationship between milk immune components and the mother’s subsistence strategy. And like any good study, it creates more questions than it answers. Subsistence strategies have varying influences on the types of pathogens and the level of exposure, but which aspects have the greatest impact on maternal immunoglobulin production—Interaction with livestock? Clean water? Exposure to helminthes (parasites)? In that same vein, which aspects of the disease ecology have the strongest influence on the maternal immune response—Pathogen virulence? Frequency of pathogen exposure? Rates of pathogen transmission? Klein et al. acknowledge that their study design does not allow them to distinguish between greater antibody responses to similar exposures or similar antibody responses to different exposures [1]. But the influence of maternal environment on milk immune factors seems clear, and will hopefully motivate future research to investigate the specific ways in which human cultural practices shape passive immunity.