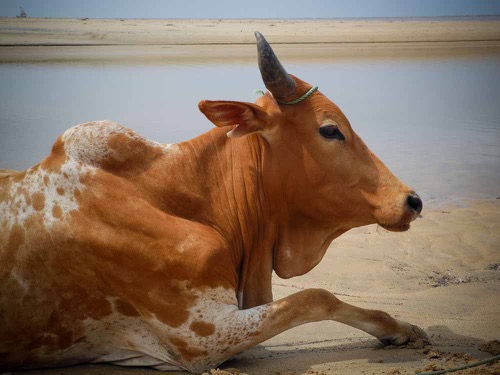 When African cattle become lazy and their milk production drops, they are said to have ‘nagana’—to be depressed, in Zulu. The biological cause of nagana is a parasite, of which there are several species, and which wiggle like winding corkscrews under a microscope. To work out how to reduce the damage done by these ‘trypanosome’ parasites, and thus improve the lot of many poor cattle farmers, we need better diagnostics. Recently, a group of researchers in Vienna invented a means of testing for three different species of trypanosome at the same time.

What explains the usefulness of their work is the fact that many trypanosome species have overlapping geographical distributions. And the appropriate treatment for infected cattle hinges on the type of trypanosome that is causing the symptoms.

Older diagnostics can pick up the presence of trypanosomes, but can’t pick apart the different species. The tests involve, for example, examining a blood sample under a microscope for the parasites’ typical turning motion, or spotting the little critters among white blood cells, after a blood sample has been whirled in a centrifuge.

Even though different trypanosome species may look the same, their genomes must be distinguishable, provided you know how to read them. The new test, created by Katja Sibermayr, of the University of Veterinary Medicine in Vienna, Austria, and her colleagues, analyses trypanosome DNA. It employs a technology called quantitative PCR, which quickly shows a positive result if a blood sample contains certain DNA sequences that are unique to each of three trypanosome species—Trypanosoma congolense, T. brucei, and T. vivax. The test indicates which species caused the DNA match. “PCR-based methods are quite difficult to perform in the field because they require sophisticated equipment,” explains Sibermayr. “[But] I think that our novel qPCR assay will be used in centralized trypanosome monitoring and surveillance facilities.”

All three of these trypanosome species occur in Burkina Faso, where Sibermayr’s team put the fruits of their labor into practice. They collected blood samples from cattle—from Zebu and Baoulé breeds, plus hybrids of the two—from 72 farms in 24 villages.

These days many African cattle breeds face potential extinction. The results of Sibermayr et al’s survey therefore read like a fable, warning of the pressing need for genetic conservation. Less than 10% of the Baoulés, a local West African dwarf breed, and of Zebu-Baoulé hybrids were infected. Those that were lost weight and developed a fever, but that was the extent of their plight.

As expected, the Zebus, a breed that was introduced from South Asia for its high milk yields and ability to pull heavy ploughs, were most likely to harbor trypanosomes. About 22% of Zebus tested were infected. Moreover, their health was badly damaged by infection. “Baoulés seem able to tolerate higher amounts of the parasite,” says Sibermayr. “We only studied [relatively] healthy animals, and Zebus with such high parasite levels would have been too ill to be included in our study.” The new diagnostic was also able to pick up cases where a single cow was infected with more than one species of trypanosome.

The genetic basis of the Baoulés’ and the crossbred cattle’s partial immunity is not clear. But the case for greater effort to protect such an important genetic source certainly is: without a stock of pure-bred Baoulés, farmers would not be able to keep mating them with Zebus to create the crossbreeds endowed with Zebu-like milk yields and Baoulé-like robustness towards nagana. That kind of effort will likely require international funding.

For now, though, this new diagnostic test, aside from guiding how infected animals would be best treated, provides a welcome insight into the spread of parasites that do their part in sustaining poverty cycles.