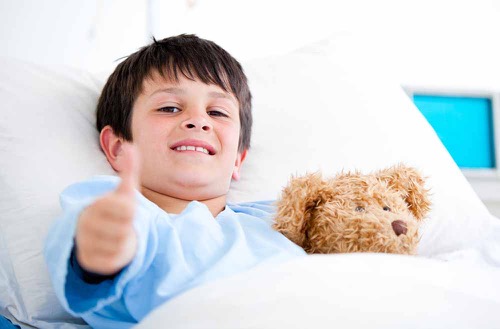 The human newborn’s gastrointestinal (GI) tract is immature and heavily reliant on components from human milk to successfully adapt to the novel challenges of life outside of the uterus. Recent research has highlighted the important role of milk’s bioactive components in establishing a healthy gut microbiome [1–4]. Starting life off with the right mix of bacteria in the GI tract is essential not only for the development of the gut but also for mucosal immunity [1, 4]. It is so essential, in fact, the gut microbiome has been referred to as an ancillary immune organ [1].

Colonizing commensal bacterial populations influence the production of proteins that help gut barrier cells stick together, train immune cells to recognize disease-causing bacteria, and prevent gut inflammation [1–3]. Dr. Stella Davies, Director of the Division of Bone Marrow Transplantation and Immune Deficiency at Cincinnati Children’s Hospital and a Professor of Pediatrics at University of Cincinnati, was listening to colleagues at Cincinnati Children’s Hospital Center for Breastfeeding Medicine discuss these very attributes of human milk in the neonate’s gut when it occurred to her that milk’s ingredients could be beneficial to bone marrow transplant patients as well.

With any type of transplant, the non-functioning or diseased body part must be removed before being replaced. Organs can be removed surgically, but removal of damaged bone marrow requires intentionally giving a patient a lethal dose of chemotherapy before transfusion with healthy bone marrow stem cells [5, 6]. Such a high dose of chemotherapy, unfortunately, has the potential to damage other healthy tissues in the process, particularly the gut. Gut mucosal cells respond to injury by producing inflammatory chemical messengers, which in turn alter the composition of the gut’s bacterial communities. The disruptions in the microbiome lead to dysbiosis—less diversity in bacterial species, reduction in beneficial species, and greater numbers of potentially pathogenic species—and have been linked to the development of graft-versus-host disease (GVHD) and bloodstream infections (BSI), both of which are significant complications of bone marrow transplants [5, 6].

Dr. Davies hypothesized that providing human milk to children after bone marrow transplants could prevent dysbiosis and reduce the incidence of GVHD [5, 6]. There have been concerns over the safety and efficacy of probiotics, such as Lactobacillus, to immune-compromised patients to help combat dysbiosis; namely, the risk of these bacteria moving from the intestines into the bloodstream (translocation) [7]. But Dr. Davies believed that human milk would not have these same issues because it contains numerous immune components that could potentially protect gut tissue by preventing an inflammatory reaction [6].

Davies did have one major concern, however, about testing her hypothesis. “I was unsure of whether parents would be accepting of giving their children human milk,” she explains. But as it turns out, this was the only thing she was wrong about.

After establishing that human milk was well tolerated by children (ages 6–40 months) undergoing bone marrow transplants [5], Davies and colleagues performed a randomized trial to compare transplant outcomes in children (age 0–5 years) receiving human milk or a standard formula via feeding tubes [6]. Initially, their study design called for randomly assigning 42 patients to the human milk versus control arm of the study in a 2 to 1 ratio, or approximately 28 patients receiving human milk and 14 controls [6]. However, nine patients that were breastfeeding at the time of enrollment were automatically assigned to the human milk arm (and were given mother’s own milk orally rather than donor milk). These nine were added to the 24 randomly assigned patients for a total of 33 children receiving human milk.

The study design was further complicated by the fact that parents did not want their children to be controls. From the nine randomly assigned control participants, three left the study when they found out they were not getting human milk and two secretly obtained human milk from other sources and informed the study staff a year after completion, leaving only four valid controls [6]. It was the opposite of what Davies had anticipated. “Mothers understood how important breast milk is and desperately wanted to have it for their babies,” she recalls.

Although it would be ideal to provide human milk for all of the children, controls are necessary to demonstrate efficacy of treatment. Luckily, the team was able to include 10 controls from a previous study that met the study eligibility requirements and had all of the necessary samples stored, bringing the control arm to 14 patients [6].

In addition to looking at incidence of GVHD and BSI, the team collected stool and plasma samples at enrollment and on day 14 after treatment, and performed analyses on all samples that would tell them about the levels of inflammatory and anti-inflammatory chemical messengers in the blood, the types of bacteria present in the stool (a proxy for the gut microbiome), and even individual metabolites, such as fatty acids and amino acids [6].

As predicted, GVHD incidence was lower in the human milk arm, particularly in incidence of grades 2–4 (or the more severe forms) of GVHD [5, 6]. This result is likely due to a confluence of factors demonstrating reduced intestinal inflammation in patients receiving human milk: bacteria associated with GVHD and BSI had lower detection in stool from the human milk arm compared with the control arm; plasma REG3α, a marker of intestinal injury, was lower in the human milk group, suggesting a protective effect of human milk on gut mucosal cells and possibly gut barrier function; and T-cell activation, a marker of an inflammatory response, was lower in children receiving human milk.

These findings are quite remarkable, but they must be considered provisional due to the small size of the study, the lack of blinding (patients knew what treatment they were getting), and the fact that not all patients were randomized.

Davies acknowledges these limitations. “We absolutely need to blind the study and randomize it,” says Davies about the next steps. Additional studies may also include only some milk components, such as human milk oligosaccharides, or oligosaccharides and immune factors, in order to pinpoint which specific ingredients are responsible for the differences in gut inflammation. But Davies admits that it is highly likely it is a synergistic effect.

“Ideally, what we would like to do is identify the components that were valuable and synthesize these to put into a pill,” explains Davies. “But it could very well be that it is a bit of a magic mix and it is several components working together.”