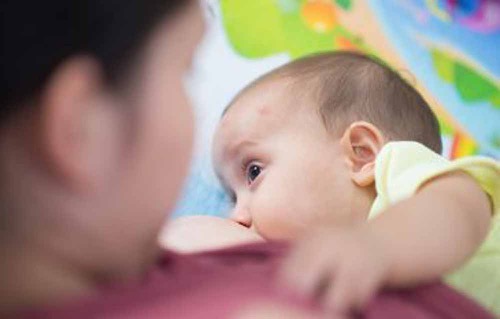 Even though human milk is one of the most important substances to the healthy development of people everywhere, its basic composition is still the subject of entirely new discoveries. In a paper published in February this year, researchers from two institutions in Japan—the Institute of Health Sciences at Ezaki Glico Company and the University of Shiga Prefecture—report the presence of glycogen in human milk [1]. Over the years, there have been circumstantial suggestions that human milk may contain this carbohydrate. But this new finding is the first example of strong, confirmatory evidence of glycogen’s presence.

Glycogen is best known as an energy store in the muscles and liver where it can be broken down into glucose. In muscle, the glucose that is released powers muscle contraction. That released in the liver circulates in the blood from which is it is delivered to all kinds of tissues in need of basic fuel for respiration.

Hiroko Matsui-Yatsuhashi, the lead author on the recent study, and her colleagues, first identified glycogen using several kinds of complex chromatography techniques—essentially tools to compare the relative sizes of molecules. These analyses showed that the substance they had extracted from human milk was indeed structurally very similar to glycogen found in cow’s livers and in mussels (two dietary sources of glycogen), and gave the researchers an idea of the number of glucose monomers that were linked together in human-milk glycogen polymers.

Matsui-Yatsuhashi and her team then took a hint from nature: they used enzymes that only work on glycogen to hydrolyze it into glucose. This enabled them to measure the amount of glycogen in human milk that was donated by breastfeeding women who attended Nagao Clinic in Kansai region, Japan.

The source of glycogen in human milk is unknown, but the mastitis result offers a hint. Aside from muscle and liver cells, leukocytes (white blood cells) are known to contain glycogen—and leukocytes accumulate in the mammary gland during mastitis. Much higher quantities of leukocytes are present in the milk of mothers with mastitis compared to the milk of healthy mothers during peak lactation. The source of glycogen in human milk might, therefore, be milk leukocytes.

While little is certain about the source of human milk glycogen, even less is known about its function. Given the high molecular weight of the glycogen that Matsui-Yatsuhashi and her team found, they suggest that some of it likely passes through the infant stomach unscathed and makes it all the way to the intestines. This is a prerequisite of a functional role, but unproven at the moment. How differing levels of glycogen might be affecting infant gut immunity in the first two months of life compared to later on—and in infants whose mothers suffer from mastitis—are surely questions worth answering.