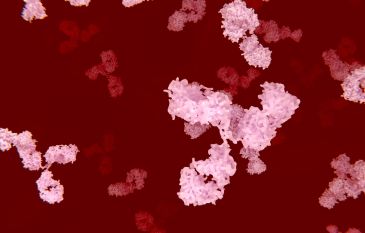 Our immune system protects us from many harmful microbes, but in doing so it needs to be able to differentiate between friend and foe. Our bodies harbor many beneficial gut bacteria that play important roles in digestion and immunity, and our immune system needs to react differently to these microbes compared with harmful pathogens [1,2].

A new study in mice finds that antibodies present in maternal milk may play an important role in suppressing the immune response to commensal gut microbiota [3]. “It’s kind of a cool evolutionary system where the mother will provide her microbiota and then provide these antibodies to instruct the pup’s immune system on how to deal with the microbiota,” says Meghan Koch, a postdoctoral fellow in Gregory Barton’s laboratory at the University of California, Berkeley.

Dysregulated immune responses against gut microbes can lead to chronic inflammation and conditions such as Crohn’s disease and ulcerative colitis [4]. “There’s definitely a lot of interest in controlling immune responses to the microbiota,” says Koch. “You could see that being a potential therapeutic,” she says.

Mothers have been previously shown to influence their newborn’s immunity by providing antibodies either through milk or through the placenta, and these were mainly thought to help newborns fight off infections [5,6]. Koch discovered that specific types of antibodies in mouse milk—immunoglobulin G2b and G3 (IgG2b and IgG3)—play a role in suppressing the immune response to commensal gut microbes. These antibodies act in conjunction with another type of antibody, called immunoglobulin A (IgA), in maternal milk.

“In particular, the role of IgG in the maternal milk has not really been appreciated,” says Koch. She notes that the studies may not translate directly to humans, where IgG is transferred to newborns mostly in utero rather than in human milk. If further studies could demonstrate that these maternal antibodies play a similar role in humans, this “could maybe help to improve formula for humans,” she says.

Koch et al. [3] started the project with the intention of trying to probe the immune response to microbiota, and decided to do so by looking at antibody responses. “We could easily recover serum antibodies from mice, and we could easily recover microbiota from mice just by taking feces,” says Koch. The researchers then looked for serum antibodies that bound to commensal bacteria. “In addition to IgA antibodies which have been previously published, we also found IgG antibodies binding to the microbiota,” says Koch. “We were really surprised,” she says.

Koch found that IgG2b and IgG3 antibodies bound microbes at a particularly high frequency. “We found that the serum concentrations of these antibodies are really high early in life, around two and three weeks of age, which coincides with the time points that young mice are still with their mothers,” says Koch. “That led to our idea that maybe these antibodies are maternally acquired,” she says.

The researchers found that the anti-commensal IgG responses were primarily mediated by maternally-derived antibodies. They found that these maternal milk antibodies normally signal the innate immune system rather than T cells of the adaptive immune system. “They were T-independent, and we think somehow they’re helping inform appropriate immune responses to the microbiota,” says Koch. “The idea was that the mother will provide her young with microbiota, and in addition to providing this microbiota, the mother might also provide some sort of instruction in the form of antibodies of how to appropriately respond to these vast array of diverse microbes that the animal’s encountering for the first time,” she says.

Without milk antibodies from their mother, newborn mice showed increased effector T cell responses compared with mice exposed to maternal antibodies. Koch notes that despite this increased T cell response, the mice did not get colitis, suggesting that there are other regulatory mechanisms. “I think it really speaks to the fact that there’s multiple layers of regulation that are helping control immune responses in the gut and prevent inflammation,” says Koch.

The study illustrates the important role maternal milk plays in modulating the infant immune system. Koch also plans to explore the role of maternal milk antibodies in adult mice to see what role they play later in life. “We’re trying to work on what are the downstream consequences of lacking maternal antibodies early in life,” she says.