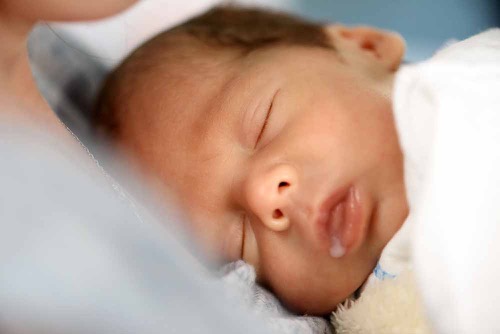 Parents of infants spend a good deal of time wiping up their baby’s drool but probably don’t give a second thought to the important ingredients that drool may contain. Lucky for them, a team of researchers from Australia happily collected and analyzed baby saliva in an effort to identify compounds that may influence the growth of bacterial communities in the infant’s mouth and, subsequently, the rest of their gastrointestinal tract [1, 2].

In 2015, the researchers reported that infant saliva contained nearly ten times the amount of the compounds xanthine and hypoxanthine as adult saliva. Even more interesting, the transition from infant to adult concentrations started at weaning [1]. All signs pointed to a special function for these compounds while the infant was nursing, leading the team to an amazing, and serendipitous, discovery: the interaction of xanthine and hypoxanthine from infant saliva with the enzyme xanthine oxidase (XO) from human milk produces hydrogen peroxide (H2O2) and other antimicrobial compounds [1]. Al-Shehri and colleagues [1] describe it as “a unique biochemical synergism.”

Hydrogen peroxide is a medicine cabinet staple, used on minor scrapes and cuts to prevent infection. It has similar antimicrobial actions inside the infant mouth as well, both on its own and in combination with another milk ingredient, the enzyme lactoperoxidase (LPO) [1, 2]. If enough H2O2 is present, it can activate the LPO system in milk, which in turn produces potent antimicrobial products including reactive oxygen species (e.g., superoxide) and reactive nitrogen species (e.g., peroxynitrite) [1, 2].

Human milk does contain a small amount of hydrogen peroxide on its own (around 27 μM) [1]. But when the researchers mixed human milk with infant saliva, the concentration of H2O2 increased to over 100 μM [1, 2]. Were these higher concentrations enough to activate the LPO system?

These in vitro findings suggested that at higher concentrations, H2O2 does trigger the LPO system. Moreover, when H2O2 acts in combination with the products of the LPO system, it may selectively inhibit the growth of harmful bacteria [1]. The milk-saliva synergy likely plays an important role in establishing the infant oral microbiome, which in turn establishes the bacterial communities that set up residence in the infant’s gut [1].

This conclusion in itself would be worthy of its own SPLASH! feature—but wait, there’s more! The same research team recently published the results of their follow up study [2]. Although still an in vitro model, the 2018 study more accurately replicated the conditions of the infant mouth during breastfeeding; they tested more bacterial species (ten instead of four), they increased the concentration of the bacteria to match that present in an infant’s mouth, and they tested the milk-saliva mixture on combinations of bacteria as opposed to just one species at a time [2].

This time they report the novel finding that bacterial growth (except for methicillin-resistant S. aureus or MRSA) was inhibited immediately upon and for up to 24 hours after exposure to the human milk/saliva mixture, regardless of whether the bacteria were incubated on their own or with other bacterial species [2]. Longer growth inhibition was associated with higher concentrations of H2O2, but importantly these concentrations were still in the micromolar range (for perspective, H2O2 from the medicine cabinet is usually at a concentration of 1 M, nearly one million times more concentrated) [2].

Taken together, the two studies [1, 2] demonstrate that the H2O2 generated from human milk–infant saliva interactions, in combination with the other oxidative radicals produced from activation of milk LPO, regulate the growth of bacterial communities, or microbiota, of the infant mouth. With each nursing event, there is the potential for immediate and prolonged antimicrobial effects, which may be critical in keeping pathogenic organisms from colonizing the infant gut. [2].

But what if there isn’t a “nursing event”? Formula-fed infants do not receive the XO enzyme and therefore do not make enough H2O2 to activate the LPO system. As predicted, there are significant differences in oral microbial communities between formula- and human milk-fed infants [1, 2]. But not all infants receiving human milk receive the XO enzyme, either. Heating and freezing damage the enzyme, meaning that infants drinking pasteurized human milk or milk that has been previously frozen—which is often the case with pumping—will have missed out on the antimicrobial effects of H2O2 and LPO as well. It is not yet known how these infants’ oral microbiomes may differ, if at all, from those receiving fresh milk via breast or bottle. Such a comparison has the potential to tease out how important H2O2 is, among the many ingredients in infant drool, in regulating the types and quantities of microorganisms in the infant mouth and gut.