How to Breed Climate-Friendly Dairy Herds 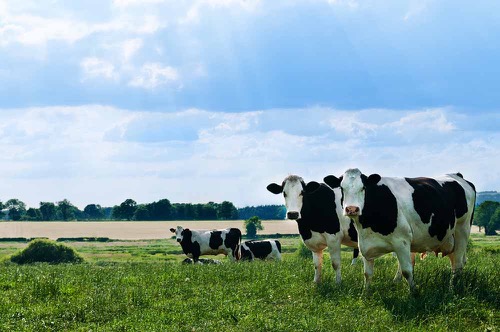 When methane emissions that contribute to global warming are blamed on cows, they should, more precisely, be blamed on the microorganisms that live inside them. It stands to reason, therefore, that in seeking ways to reduce methane emissions from the dairy and beef industries, researchers’ primary target should be cows’ microbiomes. In line with this perspective, a group of researchers with teams in four countries recently carried out a detailed analysis of the microorganisms living in the rumens of different herds and breeds of cattle [1]. These researchers have identified a population of bacteria, protozoa, anaerobic fungi and archaea that consistently form the core population of the rumen microbiome. By linking microbiome components to phenotypes such as methane emissions, they propose the establishment of microbiome-led breeding programs as a means to make livestock farming more climate-friendly.

Conducting such investigations required analyzing the rumen contents of more than one thousand cows. In each participating farm in the UK, Italy, Sweden and Finland, the teams made sure that the feeding and living conditions of the animals were very similar. All of the cows were healthy and lactating, having given birth between 10 and 40 weeks previously. They all consumed maize or grass silage or grass hay.

But not everything was similar across the herds: 816 of the dairy cows, from two UK and three Italian farms, were Holsteins, whereas the remaining 200 from the farms in Sweden and Finland were Nordic Red dairy cows. Holstein cattle (also known as Holstein Friesians) are the most productive dairy cattle in the world, by liters of milk produced. This was the most important breed to assess, therefore, in terms of gathering the evidence for policy advice that keeps production up and methane emissions down. A second, less common breed was included in the study so that the researchers could get a sense of the generalizability of cows’ microbiome components across breeds.

The teams collected samples for analysis by sucking a little fluid from cows’ rumens after each cow was gently encouraged to swallow a flexible pipe—as humans undergoing some kinds of medical investigations often do. Some of this fluid was then sent to a laboratory where the ribosomal RNA of all of the microorganisms in the fluid was amplified (in other words, copied many times), in order to ensure there were sufficient amounts of RNA to genetically identify the microorganism species, and to look for common features across species. The research teams also recorded how much milk the cows produced, and the amount of methane in their breath.

Prior to this study, the broad categories of microorganisms that tend to appear in cows’ rumens was known but with limited granularity—and without much understanding of the degree of similarity in the population structure of the microbiome across different herds and breeds. The laboratory analyses for this project discovered startling consistency in this sense. They revealed a particular group of microorganisms that compose only a quarter of a percent of the overall species pool in the cow rumen microbiome but are so abundant relative to other microorganism species that they consistently make up between 30 and 60% of the total cow rumen microbiome by mass. This is true across the two breeds, the many herds and the four countries in the study. The core group contains 512 types of microoganisms (or, 512 “operational taxonomic units” (OTUs), as types of microorganisms are referred to by experts). The vast majority of these OTUs—454 of them—are prokaryotic bacteria, 12 are protozoa, and 46 are fungi. At first blush, the core group may seem to have many members, but in light of the quarter-million OTUs that are present in the cow rumen, this group is in fact a very selective club.

Some interesting details emerged when the genetics of the core group were compared. First, these OTUs appear to be, broadly speaking, fairly closely related to each other. Second, the study demonstrated that the core group tends to be heritable—many of its members are passed down from cow to calf. Heritability of the gut microbiome is nothing new as a concept—indeed, there is evidence of this to some extent in humans—but the researchers behind this study found nearly 10 times as many heritable OTUs in cow rumens as was reported in a comparable human study [2].

Many members of the core microbiome were associated with the presence of products of fermentation in cow breath, such as the concentration of propionate. Fewer members—though some—could be linked statistically to patterns in milk production and to methane emissions. However, the fact that some OTUs were linked in this way, and the point about heritability, together suggest ways of leveraging knowledge about the cow rumen microbiome to reduce dairy farming emissions.

The researchers suggest selective breeding programs in which core group microorganisms that lower methane emissions are encouraged to populate the cow rumen over those that appear to contribute to methane emissions. Alternatively, the team proposes the use of precise probiotics—the inoculation of young cows with key core species associated with low methane emissions. If herds of dairy cows with low-methane-generating microbiomes could be developed, then, in theory, these cows will pass on their microbiomes to their young, and few or no additional interventions would be needed—meanwhile, the dairy industry, all things being equal, would be contributing less to climate change.