How Much Milk Does a Cow Produce? Depends on Early Life Conditions 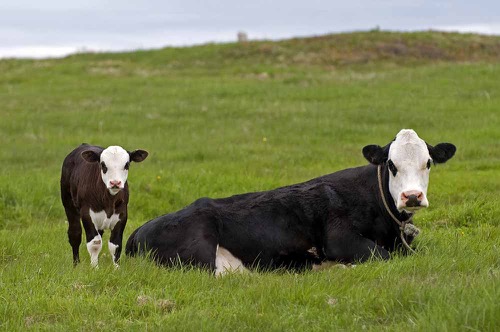 Maternal nutritional conditions during pregnancy are known to have substantial impacts on infant development. This was most clearly demonstrated by research into the outcomes of infants from the Dutch Hunger Winter of 1944. Because determination and differentiation of cell lines occur during embryonic development, nutritional conditions and other environmental insults early during pregnancy can substantially alter offspring phenotype, including behavior and general health. For example, the Hunger Winter produced different results depending on whether the mother’s nutrition was most interrupted during the first, second, or third trimester, or during lactation. Research into fetal programming and developmental origins of health and disease has identified that early life nutritional conditions affect numerous physiological systems and organ structures, putting individuals at later risk for kidney, liver, heart, pancreatic, neurobiological, endocrine, and reproductive dysfunction (Schug et al., 2012). Simply put, our early life experiences leave their mark.

Other factors within the mother and the environment beyond nutrition may affect offspring development because of trade-offs. Life-history theory, an area within evolutionary biology, is predicated on the fact that organisms have limited energy and resources that must be allocated toward several biological “imperatives”- maintenance, development, and reproduction (Stearns, 1992). Maintenance is basically keeping your body alive–such as thermoregulation and immune responses. Growing (i.e., adding mass) and development (i.e., skeletal ossification) also require energy and resources. And producing that most valuable currency of natural selection–BABIES–does not come cheap.

Because you can only spend, or burn, a calorie once, individuals face trade-offs among maintenance, growth, and reproduction. Under famine conditions children become stunted, reducing allocation of resources to gaining stature (Gørgensa et al., 2012). Female Olympic athletes often have reduced fertility due to altered ovarian function (DeSouza et al., 2010). Why cycle if body fat reserves are too low to sustain pregnancy or lactation? And once reproductive, females face trade-offs between current and future reproduction. Allocating too much energy to the current offspring can deplete mothers and delay future reproduction while females recover. Natural selection favors adaptations that allow females to maximize their lifetime reproductive success–the total number of offspring produced over their reproductive careers. Underlying mechanisms in female reproductive physiology are seemingly sensitive to nutritional intake and body condition, and through these mechanisms fertility, pregnancy, and lactation are regulated and resources allocated to the developing offspring.

In some mammalian species, females can produce more offspring over their lifetime if they can sustain overlapping pregnancy and lactation. This is actually a characteristic feature of some marsupials (Tyndale-Biscoe and Renfree, 1987). While simultaneous pregnancy and lactation can increase reproductive output, it also sets the stage for competition for maternal resources between milk synthesis for the infant and nutrient transfer via the placenta to the fetus.

In December, González-Recio and colleagues reported that overlapping pregnancy and lactation produced epigenetic consequences for the fetus that manifested in adulthood. They used a sample of >40,000 Holsteins, and admirably controlled for other genetic and environmental factors. Heifers that were gestated by a mother who was also lactating produced significantly less milk and died at younger ages! Of course, just like when signing a contract, it’s important to read the fine print. These heifers produced ~52 kg less milk per lactation, but since the average production per annum for a Holstein is on average ~10,000 kg of milk, translated that is ~0.005% less milk. They also died only 16 days earlier than heifers that were gestated by a female who was not lactating. However, these were detectable effects that suggest early embryonic and fetal development *IS* sensitive to any reductions in resource allocation. Moreover, from a biological perspective, we would expect this effect to be greater in wild-living mammals that aren’t fed or provided with any veterinary care.

Along similar lines, Soberon and colleagues showed that among calves reared on milk replacer, trade-offs between maintenance and growth reduced milk yield in adulthood (2012). Standard rations of milk replacer were provided to calves, but calves born during the winter had to burn more energy for thermoregulation. Less energy was available for growth and they did indeed grow significantly more slowly. Interestingly, for every additional kg of average daily gain in pre-weaning, body mass resulted in 850-1100 kg more milk on their first lactation (effect size varied between commercial and educational herds). This was directly linked to the amount of milk replacer the calves got above their maintenance needs. Thermoregulation wasn’t the only maintenance cost some calves had to pay. Getting sick in early life also impacted future production–calves that received antibiotics went on to produce ~500 kg less milk on their first lactation.

The precise underlying mechanisms by which mammary gland function is impacted by early life trade-offs (either by the dam or the calf) are not yet clear. However, the effects are likely through epigenetic modification of gene expression (see Ross Tellam’s column from May 2012). Important questions remain about the length of critical windows in which developing organisms are sensitive to environmental influences and the possibility for reversing or mediating early life programming. Until we better understand the proximate pathways, these phenomenological results still provide valuable insights. Dairy scientists may be able to further improve milk production by shaping animal husbandry practices to optimize early life development. And most importantly, these results illustrate the value of theoretical and evolutionary perspectives for understanding lactation biology (Hinde and German 2012).