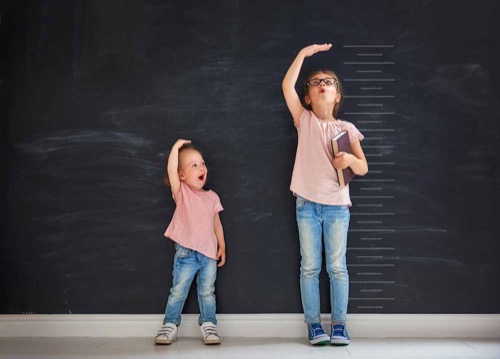 Undernutrition is a pressing global health challenge and contributes to the deaths of more than three million children under the age of five every year (1). Children who are considerably shorter than the median for their age are defined as stunted, and so far, nutritional interventions have been mostly unsuccessful at reducing stunting (2).

That’s particularly concerning due to the myriad long-term consequences of stunting, which include poor response to vaccines, reduced cognitive ability, and complications in pregnancy (3, 4). Many research efforts have thus been dedicated to understanding the underlying causes of stunting and why current treatments are unsuccessful, with the goal of finding more effective interventions.

“Undernutrition is a pressing, vexing, and in many respects tragic situation, and we want to be able to understand those factors that create risks for and that have large effects on the healthy growth of children,” says Dr. Jeffrey Gordon of Washington University School of Medicine. “We are interested in the community of tens of trillions of microbes that collectively are referred to as the gut microbiota, and have been pursuing a hypothesis that there is a definable normal program of assembly of this community in infants and children and that undernutrition, which is a leading cause of death of children under five worldwide, may be caused in part by defects in the development of this microbial organ,” he says.

In a new study, Gordon and a postdoctoral researcher in his lab, Dr. Carrie Cowardin, set out to investigate one particular aspect of the growth faltering seen in undernourished children—the reduced bone growth that underlies stunting (5).

Previous work by Gordon’s group has shown that certain human milk sugars, known as human milk oligosaccharides (HMOs), may influence bone growth (6). “We are very fascinated by what components of breast milk may impact the functioning of the microbial community in the gut, and if health of mothers, their nutritional status and the status of their breast milk all relate to the development of this microbial community and the pathogenesis mechanisms underlying the development of undernutrition,” says Gordon.

“We reported in 2016 in a study of breastfeeding mothers living in Malawi that those who had infants who were stunted were being breastfed by mothers whose levels of carbohydrates in breast milk differed from mothers whose children were experiencing healthy growth,” says Gordon ( “Stunted infants were consuming breast milk that had lower levels of certain types of human milk oligosaccharides, particularly sialylated sugars,” he says.

Gordon and his colleagues set out to purify substantial quantities of these sialic acid-containing milk oligosaccharides. “It’s not possible to get enough human breast milk to purify large quantities, so we turned to the production of cheese and whey,” says Gordon. “The whey waste stream from cows contains sialic acid-containing carbohydrate structures that look very much like those in human breast milk,” he says.

When Gordon’s group administered these purified bovine sialylated milk oligosaccharides (S-BMOs) to gnotobiotic mice colonized with bacteria from a stunted Malawian infant, they found that it could affect their bone growth (6). “That’s the entree to this deeper dive into bone biology and the immune system, the gut microbiota and bone growth,” he says.

In the new study, Cowardin and Gordon looked at bone biology in a cohort of stunted Bangladeshi children with severe acute malnutrition. “There’s sort of a lack of understanding of whether bone resorption, which breaks down bone, or bone production are more important during undernutrition,” says Cowardin. When the children were given nutritional rehabilitation with therapeutic foods, they experienced a significant reduction in levels of a biomarker of bone resorption by the end of treatment. “This marker of bone resorption was elevated prior to treatment and then decreased after nutritional therapy,” says Cowardin. This reduction was not accompanied by changes in bone production, and was also not sufficient to improve the severe stunting of the children.

Gnotobiotic mice were colonized with bacterial strains cultured from a 6-month-old stunted Bangladeshi infant. “We used the defined gut communities from a child with severe acute malnutrition and who is also severely stunted,” says Cowardin. “Then we fed these animals a diet that’s representative of what the donor infant would have been consuming,” she says. “When we supplemented one group with the sialylated oligosaccharides, we saw an increase in weight gain, as well as an increase in bone volume,” says Cowardin.

The researchers then looked in more detail at how S-BMO intake affected bone biology. “What we saw was that rather than influencing bone building, we saw a decrease in bone resorption and a decrease in bone resorbing cells on the bone surface as well as their progenitors within the bone marrow,” she says. “So, this component of healthy human breast milk, sialylated oligosaccharides, can improve weight gain and bone growth by decreasing bone degradation in a pre-clinical model,” she says. “It’s really interesting to us because it kind of mirrors what we saw in children undergoing treatment for severe acute malnutrition.”

Interestingly, the effects of S-BMOs were structurally specific, and were not evident in colonized mice whose diets were supplemented with 2′-fucosyllactose (2′-FL), a different type of HMO present in human milk. “Perhaps the most prominent component of breast milk is a series of carbohydrates that have a molecule called fucose linked to it, and adding a fucose-containing carbohydrate structure did not re-enact this set of complex interactions,” says Gordon.

Cowardin then investigated the mechanisms by which a human milk sugar might be interacting with bone-degrading cells, known as osteoclasts. “Osteoclasts are very interesting because they’re known to be regulated by the immune system, so we wanted to understand how S-BMO supplementation was influencing host immunity both within the gut as well as within the bone marrow,” says Cowardin. “What we found was that animals supplemented with S-BMO had an increase in gut eosinophils, which are a type of immune cell that is not directly known to regulate bone building but that can influence osteoclast development,” she says. “We also saw an increase in levels of eosinophil recruiting and an immune signal called eotaxin,” says Cowardin. “To sort of tie this together, we saw an increase in gene expression within the gut that was indicative of an increase in tuft cells, which are really interesting cells in the intestine that sense luminal content and can orchestrate a type of immune response associated with eosinophils,” she says.

The findings provide a mechanistic link between sialylated milk oligosaccharides and the regulation of osteoclast formation and function. “These tuft cells are very adept sensors of their environment and can taste, sense, and communicate that to neighboring cells,” says Gordon. “This cell population was markedly affected by the presence versus absence of S-BMO in the diet, so that’s interesting,” he says. “Maybe we have a connectivity between this milk component, this very well-equipped sensory type of cell and a connection to the immune system, and the immune system in turn could communicate with these bone marrow-derived cells that are involved in degrading bone,” says Gordon.

Cowardin also looked for a compound called succinate that is produced by the microbiota and that can increase tuft cell numbers. “We looked for succinate in the gut of animals supplemented with S-BMO and saw an increase in succinate, so increased succinate levels due to S-BMO supplementation drives an increase in tuft cell numbers and those tuft cells then orchestrate the immune response, culminating in a decrease in osteoclast numbers and a decrease in bone,” says Cowardin. “Overall we found that there’s an interaction between the diet and the microbiota to alter the immune system and influence bone and muscle growth,” she says.

The results underscore the need to better understand the interactions between diet and bone biology in stunted children. Future studies could further explore the types of HMOs in human breast milk and how they affect the development of the gut microbiota and the interactions between the gut microbiota and key aspects of growth, including bone growth. “That’s a major question in understanding infant development that we can explore using these animal models first and then test in humans,” says Gordon. “There also needs to be more work looking at the complex set of interactions between maternal health status, breast milk and infant development, as they’re all interrelated,” he says.

Understanding the effects of milk oligosaccharides on the interplay between gut microbiota and bone biology may eventually have therapeutic implications. Identifying human milk components that influence infant development though their effects on the gut microbiota and immune system could provide new treatments for childhood undernutrition and stunting.